How many glue flaps are needed for each shape's net?

So I was creating some dice from printed nets, and I noticed it doesn't matter where you put the glue flaps(1) around the net(2) of a d6(cube) you'll always end up with 7 flaps if the net can produce a valid cube: 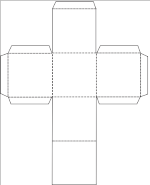 This also happens for d20(icosahedron), for which there can be many nets with different shapes, But still with the same number of flaps(11): 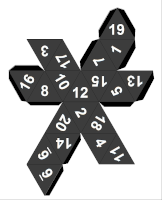 and d12(dodecahedron) which one would think should have a simpler net because the smaller number of faces, actually had even more flaps than d20 which made it much harder to craft:

So this made me curious, is there a set number of flaps needed for a certain shape or this is a coincidence that I found nets with the same number of flaps?
if there is a certain number, is there a formula for it? and if there isn't, how can I make sure the net I make is the most efficient one available (there are other factors like the number of creases needed and having a least one flapless face for that, but we only talk about the number of the flaps for now).

Any additional information about nets and creatable shapes is appreciated. Internet seems void of any information on any net other than the net of a normal cube.

(1) A flap is used to glue two faces of the shape which aren't already connected in the net and every edge between two such faces needs a flap on one of the faces it connects. you can search for a video of a cube being made from the net to fully understand the flap's usage.
(2) Opened 3d shape on the 2d plane that can be folded to make the 3d shape.

I was thinking of a convex polyhedron. When the polyhedron isn't convex, you might get a cycle, I think.

4
Construct polyhedron from edge lengths
0
Angle between vertex and center of face in Platonic solids?
0
Finding the faces of a shape from coordinates
1
Nets of Dice - how to know if it is a Nets of Dice
1
A formula to describe the relation of faces, edges and vertices in three-dimensional convex bodies
1
For certain pairs of Platonic Solids, are the edge-centers and face-centers equivalent?
0
How would you describe the 3d shapes formed by the 6 or 18 neighbors of a cell in a cell latice? (Picture included)
1
net of a solid church-like