I am learning functional equation and encountered $f(f(x)-x)=x$.

But I cannot move further.

As @PaulSinclair pointed out, there is an uncountably infinite collection of extremely ill-behaved solutions (I don't know why so please explain), so assume $f$ is continuous first.

Can someone help me? Any help is appreciated!

(In more intuitive terms, what's going on here is that $\alpha$ is a repelling fixed point of $T$, and so if $x$ is not exactly equal to $\alpha$ then $T^n(x)$ will eventually get far away from $\alpha$. In particular, it turns out that $T^n(x)$ will always get far enough away to become negative, contradicting that $h$ needs to be positive.)

A few days ago I deleted my answer, which depended on the injectivity of $f$, which is not obvious at all, as Eric Wofsey remarked. An answer has been posted since (by him), but I'll post my variation of the previous answer anyway.

Now for the details:

Let $\Gamma'$ be the graph in the new coordinates, which is a reflection of the original graph. Note that it doesn't have to be the graph of a function anymore. We want to prove that $\Gamma'$ has to coincide with one of the coordinate axes.

We are now in the situation of the following picture, where the red dots lie on the graph, the blue lines are the eigenspaces of $T$. The dots other than the origin may be very far, but they can be arbitrarily close to the blue lines. 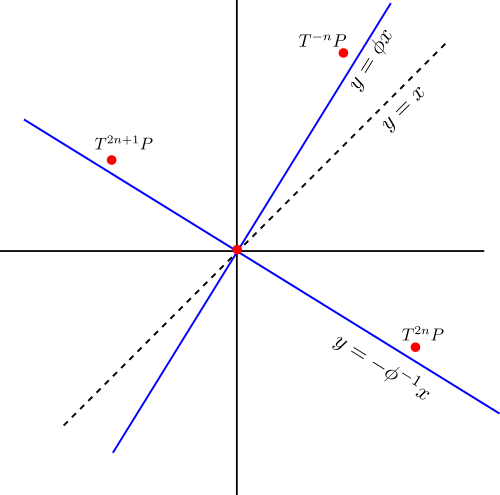 showing that such a point $P$ couldn't exist.

I originally deleted this, since as Eric Wofsey remarked, it depended on the injectivity of $f$, which didn't seem obvious. In a comment to my second intent he provided an argument though, so this can be made to work. I am incorporating that comment in this answer, which is simpler than my other one.

maps the graph of $f$ onto itself.

Let's consider the graph of $f$ in the new coordinates, and assume it has a point $P$ that is not on any of the coordinate axes. By considering $T^n(P)$ for

we get points on the graph arbitrarily far away, while also arbitrarily close to, three of the four semi-axes. This cannot be the case for any reflection of a graph of a continuous bijective function on the reals, so there cannot be points off the axes, which correspond to the graphs of $f(x) = \phi x$ and $f(x) = -\phi^{-1}x$.

Not the answer you're looking for? Browse other questions tagged functional-equations or ask your own question.