So, how can I have to prove this using natural deduction: $\lnot p, p \lor q \vdash q$

What I did is:

You have a disjunction as 2nd premise : thus you have to consider both disjuncts with $(\lor \text E)$.

The first sub-case, with $p$ as assumption, is Ok.

You have to add the second sub-case, with $q$ as assumption, in which case the conclusion $q$ is immediate.

It helps to use a proof checker to make sure one uses the rules correctly. Here is a proof: 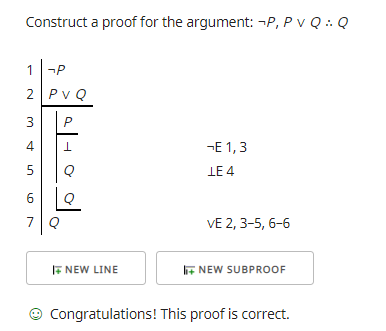 The first five lines are the same as your proof. However, they only considered the left side, $P$, of the disjunction on line 2. You have to also consider the right side, $Q$. Note how that was done in this proof checker simply by stating the assumption on line 6. Line 6 was also the derivation of the goal.

Not the answer you're looking for? Browse other questions tagged logic natural-deduction or ask your own question.