Geometry problem with parabola and two tangents which intersect 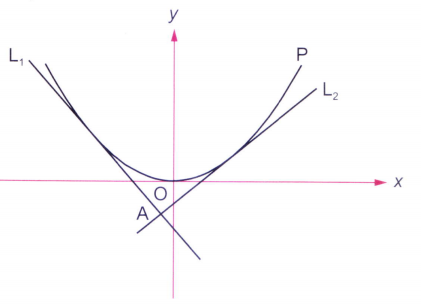 Anyone, please help, I am freaking out.

I'm going to explain #1 which may help you figure the rest on your own.

Next look at the first tangent line

Not the answer you're looking for? Browse other questions tagged geometry parametric tangent-line locus or ask your own question.

0
Angles of which locations of points corresponding to distances intersect each other
1
Finding the locus of the points of intersection of tangents to a parabola
1
Find the control point of quadratic Bezier curve having only the end-points
0
The acute angle formed by intersecting lines is equal to the acute angle formed by their normals
3
Proving this elegant formula for the area of a parallelogram using the equations of its bounding lines
0
D.c's of angular bisector of two lines in 3D
0
Finding the circle given two tangent lines and a point along one of them and on the circle
6
Condition when angle between two lines is ${\pi\over 3}$