Definition. A family $\mathcal{F}\subseteq\mathcal{P}(\omega)$ has the finite intersection property if $\bigcap\sigma$ is infinite for all $\sigma\in[\mathcal{F}]^{<\omega}$.

Definition. An $A$-triple to be a triple of the form $(\mathcal{T},A,Q)$ such that the following conditions are satisfied.

1) $\mathcal{T}$ is a strong Choquet, second-countable topology on $2^{\omega}$ that is finer than the standard topology (cones topology).

3) $Q$ is a non-empty countable subset of $A$ with no isolated points in the subspace topology it inherits from $\mathcal{T}$.

I am reading the following Lemma and I found two details that I don't see very clearly.

Any hint will help me a lot. 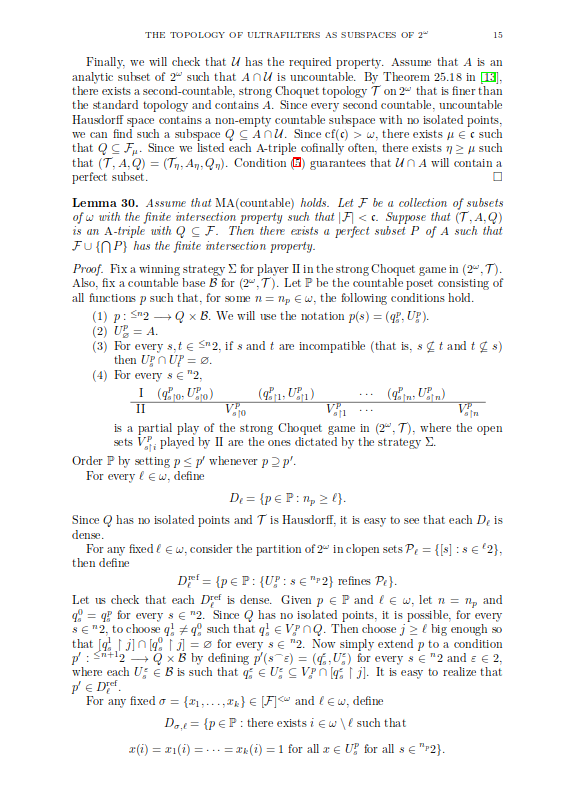 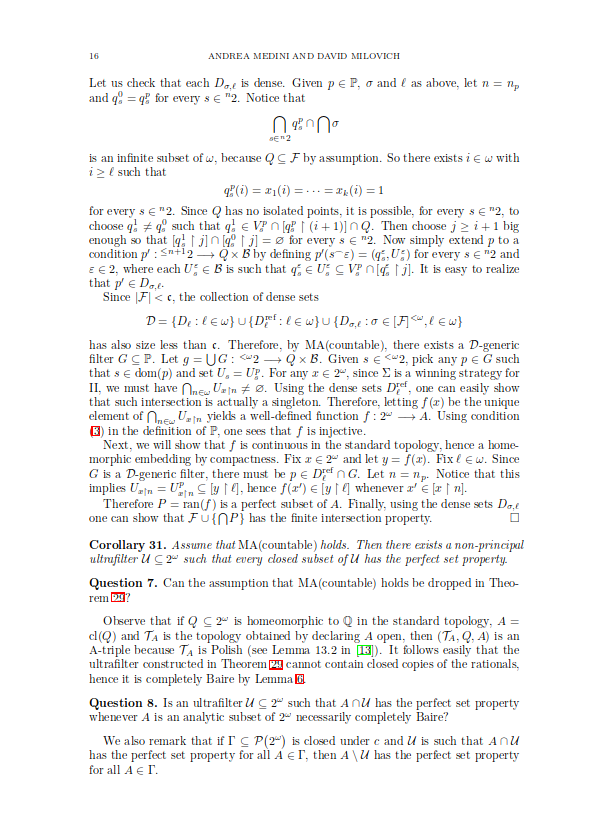 Concerning your first question, I believe that they are only using “refines” in the sense of being just finer, not a finer partition. Perusing the second picture (p. 16) the density of $D_{\ell}^{\mathrm{ref}}$ seems to be only needed to show that $\bigcap_{n \in \omega} U_{x | n}$ is a singleton.

Not the answer you're looking for? Browse other questions tagged descriptive-set-theory or ask your own question.

2
Is uniform continuity well defined on Polish spaces?
55
The $\sigma$-algebra of subsets of $X$ generated by a set $\mathcal{A}$ is the smallest sigma algebra including $\mathcal{A}$
3
Question about the Baire space, $\sigma$-algebra and $\sigma$-ideal.
3
Filter, which does not have the Baire property
2
A Homeomorphism Between the Baire Space and a Countable $G_\delta$ set of the Cantor Space
8
Combinations of Lebesgue measurability, the property of Baire and the perfect set property
2
If $\mathcal{J}\subseteq 2^{\omega}$ is a maximal ideal and $D$ is a countable dense subset of $\mathcal{J}$, the closure of $D$ is $2^{\omega}$?
3
$\exists$ countably generated $\mathcal F$, s.t. $\sigma(\{ \{\omega \}: \omega\in\Omega \}) \subsetneqq \mathcal F \subsetneqq \mathcal B(\Omega)$?
1
Souslin operation $\mathcal{\Gamma}$ contains countable union and intersection