I was playing around with this demo of Project Euler Problem 208 which allows you to take steps which are "left" or "right" arcs of $1/5$ of a unit circle.

Here's an example walk, which starts at the blue dot pointing vertically up, and which consists of steps 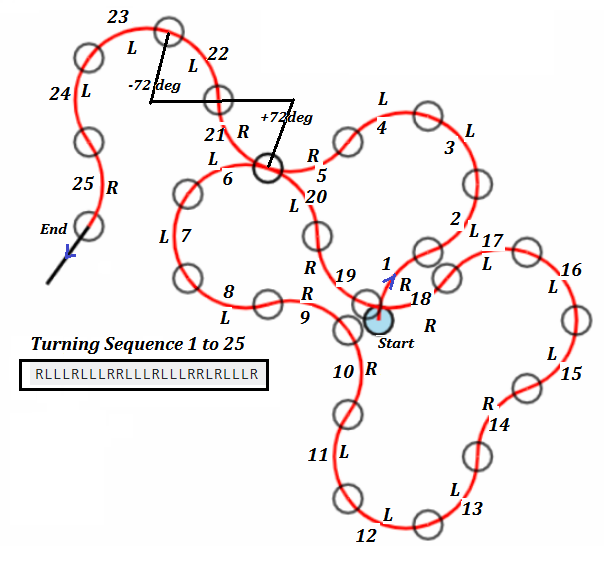 Yes, the set of points attainable by these paths is dense in $\mathbb{R}^2$. Pardon the lack of polish in this answer; I don't have a 'real' math background, so I'm expressing my ideas here using the language most intuitive to me.

We can think of any path as a linear combination of five 'moves,' which w.l.o.g. are given by the vectors $v_n = (\cos\frac{2\pi n}{5}, \sin \frac{2\pi n}{5})$. Paths cannot be arbitrary integer combinations of these vectors, since there are only two moves available after each step. We can, however, devise the following scheme to obtain arbitrary integer combinations of the vectors $2v_n$. Consider the following paths (I've written out the linear combination long form to show the order that the steps must be taken in each path):

Digging around MathSE, I found this answer that asserts, based on Kronecker's theorem, that if three vectors have components that are all linearly independent over the rationals, then the set of their integer combinations is dense in the unit square (and by extension the plane). $2v_1$, $2v_2$ and $2v_3$ satisfy this hypothesis, so the claim should follow.

Not an answer, but just an opportunity to mention that the behavior of the "Tangle Toy," which comes in quarter-circles, 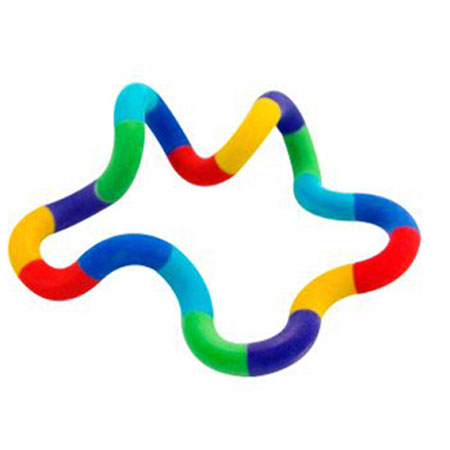 Image from FatBrainToys. has been studied (but not addressing your question):

To address @Narasimham's question, this paper

says that the curvature $\kappa(t) =\pm 1$ outside of the knot points, and that torsion $\tau(t)$ is zero, again excluding knot points.

3
When does the set of integer linear combinations of 3 vectors in the plane form a dense subset?

5
How to show that all points are inside of unit circle?
8
What's the point of the Poincaré disc model?
5
Average Perimeter With n Points on the Unit Circle
2
$6$ points on the unit circle
1
Weighted sum of points within unit circle
0
Showing that 5 points are on a circle
2
Sum of squared distances between points on a unit circle