Final update: on 11/29/2019: I have worked on this a bit more, and wrote an article summarizing all the main findings. You can read it here.

This functional equation appears in the following context. Let $\alpha\in[0,1]$ be an irrational number (called seed) and consider the sequence $x_n=\{2^n \alpha\}$. Here the brackets represent the fractional part function. In particular, $\lfloor 2x_n\rfloor$ is the $n$-th digit of $\alpha$ in base $2$.

The values $x_n$ are distributed in a certain way due to the ergodicity of the underlying process. The density associated with this distribution is the function $f$, and for the immense majority of seeds $\alpha$ that density is uniform on $[0, 1]$, that is, $f(x) = 1, x \in [0, 1]$. Such seeds $\alpha$ producing the uniform density are sometimes called normal numbers; their digit distribution is also uniform.

All rational seeds $\alpha$ work, but they produce a discrete distribution. Thus their density is of the discrete type. Here however, I am interested in a continuous function $f$, even if it has infinitely many points of discontinuity (that is, a function $f$ continuous almost everywhere: the set of discontinuity points has Lebesgue measure zero.) 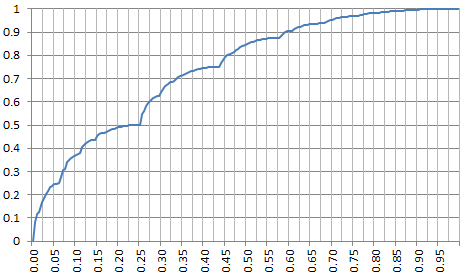 Note: I eventually answered my question, see the second answer.

Not an answer, just some thoughts.

We can consider a particular case (or is this the general case?):

For $a$ not being a rational multiple of $\pi$ the infinite product doesn't converge, and the function itself is not nice.

Not sure if this could lead to a non-trivial solution to the original equation though.

Here I discuss in more detail the case mentioned in the section "second update". This special distribution was produced with a seed $\alpha$ built as follows: its $n$-th binary digit is $1$ if $\mbox{Rand}(n)< p$, and $0$ otherwise, using a pseudo random number generator. I used $p=0.75$ in my example.

Now $x_n$ (introduced in the first paragraph in my question) is a random variable, and we have:

Here $b$ is the base ($b=2$), and $d_{n+k}$ is the $(n+k)$-th digit of $\alpha$ in base $b$. Furthermore, by construction, these digits are identically and independently distributed with a Bernouilli distribution of parameter $p$. Thus, using the convolution theorem, the characteristic function of $x_n$ is 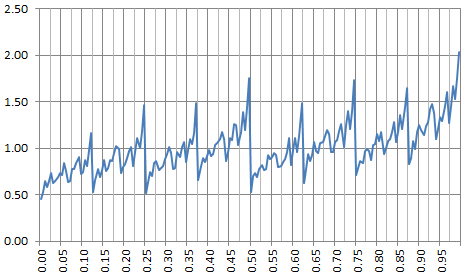 Now we should prove that this case is ergodic, for the functional equation to apply. I also tried to check with some sampled values of $x$ to see whether $f(x) = \frac{1}{2}\Big(f(\frac{x}{2}) + f(\frac{1+x}{2})\Big)$, but the function being discontinuous everywhere, and since I got its value approximated probably to no more than two decimals, it is not easy. The distribution attached to this density has the following moments:

An Excel spreadsheet with the computation of $x_n$ up to $n=200,000$ and with a precision of 14 decimals, is available upon request. You can interactively change $b$ or $p$ and see the result on the chart. Despite dealing with more than 200K digits, the computations are done very efficiently. Finally, the functional equation can be adapted to base $b$, provided $b$ is an integer. It becomes:

Not the answer you're looking for? Browse other questions tagged real-analysis sequences-and-series irrational-numbers density-function or ask your own question.