In a class of students, one student is given a bag of 2014 coins whilst none of the other students in the class receive any coins at all. Every time two students meet, if they have an even amount of coins together then they split the coins equally, while if they have an odd number of coins together then they put one coin in the class's cash register and then split the coins equally. After a long time with alot of trades, it so happens to be that every single coin is in the class's cash register. What is the least number possible of students in the class?

Before reading my solution feel free to try solving the problem by yourself. Also, the questions I have regarding this problem is: Do there exists more sophisticated maths that could be used such as recursions, sets etc. to shorten the proof and make it look nicer? Any improvments overall on my solution? Any suggestions for proofs on the second part? Plesase keep those questions in mind as you proceed to read through my solution.

Consider the case where every student in the class have a positive number of coins, we find that there is no way of reaching $0$ coins for any of the students in this case, for if we have two distict students $A$ and $B$ with $a$ and $b$ number of coins respectively with $a,b \geq 1$ it will result in $a+b \geq 2$ and so both $A$ and $B$ will be left with $\geq 1$ number of coins after the trade. Thus the condition that no students have any money left cannot be fulfilled.

Unavoidably, we then must have students reaching $1$ coin in the process, and so we aim our investigation towards that goal. Also note that, since the students split the coins equally, if we have one student left with $1$ coin after a trade then there exist another student with $1$ coin aswell. Now trivially, I would argue that the fastest and most sufficient way of reaching two students with $1$ coin each under the given restrictions, is just dividing the same student's amount of coins by two over and over again by adding more students to the class. With that as our choice of strategy combined with some numerical investigation, we are able to conjecture the following:

Conjecture: "Under the given conditions and initially starting with $c$ coins for some integer $c$, the number of students it takes for two students to be able to leave a trade with $1$ coin each is in total only one student short of being a sufficient solution for the problem"

For example; for the picture below, let the capital letter denote a distinguishable student and let the number describe the amount of coins that student has. Initially, student $A$ starts with $10$ coins and is required to trade with $3$ other students, namely $B,C$ and $D$, in order for $A$ to reach $1$ coin. We see that is takes a total of $4$ students to reach two students who both have $1$ coin each and by our conjecture, $5$ students will be enough and sufficient as a solution to the problem. 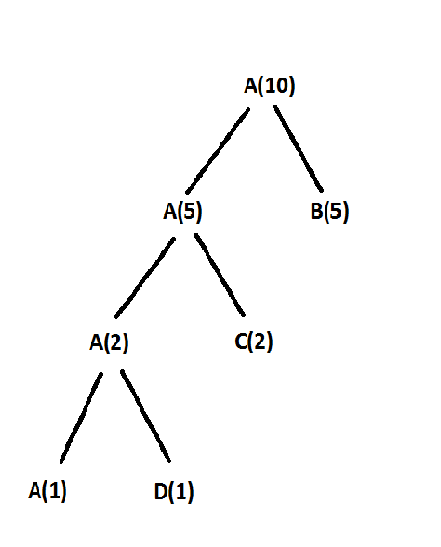 My questions: Do there exists more sophisticated maths that could be used such as recursions, sets etc. to shorten the proof and make it look nicer? Any improvements overall on my solution? Any suggestions for proofs on the second part?

I think you did a very good job here. I don't think more sophisticated math tools would make the problem easier to solve. One of the things that will make your proofs shorter is practice -- you'll become more confident of knowing when you've made a solid point so that you don't have to repeat yourself. But you definitely deserve to be a tertiary student based on this sample!

Not the answer you're looking for? Browse other questions tagged contest-math recreational-mathematics alternative-proof recursion recursive-algorithms or ask your own question.

4
What is the largest value not attained by coins worth $\$0.25$ and $\$0.29$? (Frobenius Coin Problem)
30
Puzzles or short exercises illustrating mathematical problem solving to freshman students
1
Scheduling gym class
1
how to re-organize the classes
5
A magician places $n$ coins on a table and walks down off the stage.
4
Coin Flip Problem: a competition based on the probability of flipping heads
2
Optimality proof for the coin-change problem of 1, 2, 5 and 10