Is there a known non-euclidean geometry where two concentric circles of different radii can intersect? (as in the novel "The Universe Between")

From the 1951 novel The Universe Between by Alan E. Nourse.

Bob Benedict is one of the few scientists able to make contact with the invisible, dangerous world of The Thresholders and return—sane! For years he has tried to transport—and receive—matter by transmitting it through the mysterious, parallel Threshold.

Incredibly, something changed. A pause, a sag, as though some terrible pressure had suddenly been released. Their fear was still there, biting into him, but there was something else. He was aware of his body around him in its curious configuration of orderly disorder, its fragments whirling about him like sections of a crazy quilt. Two concentric circles of different radii intersecting each other at three different points. Twisting cubic masses interlacing themselves into the jumbled incredibility of a geometric nightmare.

The author might be just throwing some terms together to give the reader a sense of awe, but maybe there's some non-euclidean geometry where this is possible.

Yes, with the appropriate definition of "circle". Namely, define a circle of radius $R$ centered at $x$ on manifold $M$ to be the set of points which can be reached by a geodesic of length $R$ starting at $x$. This seems pretty reasonable, and reproduces the usual definition in Euclidean space.

It's not hard to see that concentric circles on a torus or cylinder can have four intersection points. 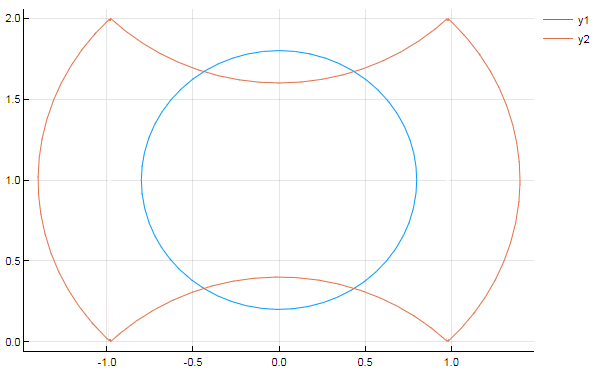 (Here's how to interpret this picture: The larger circle has been wrapped in the y-direction, reflecting a torus or cylinder topology. Coming soon: A picture of this embedded in 3D.)

*As a technical point, this can definitely be accomplished in Finsler geometry, though I'm not sure if it can be done in Riemannian geometry.

The situation is impossible if we make the following assumptions:

From the above, suppose that $C$ and $D$ are two concentric circles that intersect at a point. The two circles have the same center, $e$, and call the intersection point $p$. Then the distance between $e$ and $p$ is the radius of $C$, but it is also the radius of $D$, so the two circles cannot have different radii.

We could make the situation possible by discarding some of the axioms, but for the most part, these axioms are so fundamental to the notion of geometry that if you discarded one, the result wouldn't be considered geometry any more (not even non-Euclidean geometry). In particular, axioms 2 and 4 above are essentially just the definitions of the words "concentric" and "intersect," and axioms 1, 3 and 6 essentially constitute the definition of a circle with a given center and radius.

If I had to pick an axiom to discard, I would discard axiom number 5: the statement that given two points, there is only one distance between those points. This is the approach taken in Luca Bressan's answer (a plane based on modular arithmetic, where pairs of points with a distance of $0$ also have a distance of $2$ and vice versa) and in Yly's answer (a cylinder, where a pair of points has infinitely many distances, depending on which direction and how many times you wrap around the cylinder as you measure the distance).

That argument works in any geometry where distance is defined.

If the circles need not be concentric you can imagine a solution. Think of two towns. Consider "time to travel" as a measure of distance. Suppose the towns separated by a range of hills with several low passes. There can be exactly three isolated points each reachable in $10$ minutes from each town.

I'll make a guess: Think about streets, a "circle" is a path in which you can go from point $A$ and return to itself and you can define a "center" in some reasonable way. As the structure of the streets can be very messy (in certain streets, you can go in only one direction, in others, you can go both ways, etc), I guess you can construct different "circles" with the same center that intersect at any "points" you want.

I built this, for example: 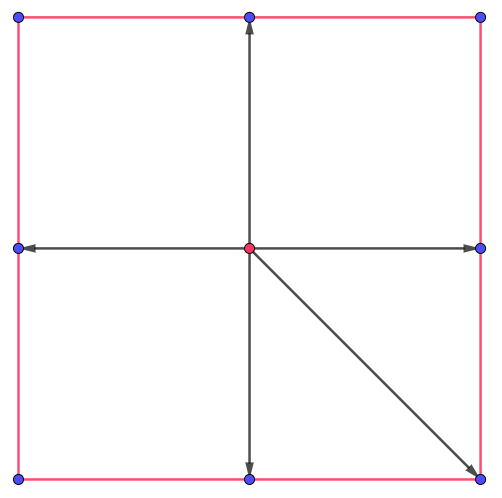 The directions with arrow are one way routes, the ones without arrows are two way routes. You can define "distance" like this: The number of different streets (edges) it takes to move from $A$ to $B$. Try to think what are the "circles" with "radius" $2$ and $3$ here. Notice that this is probably a very weird "distance" that may not enjoy all properties of the habitual euclidean space.

In hyperbolic geometry, there is the notion of a horocycle, which is essentially a circle of infinite radius. You can have two concentric horocycles which are different but 'meet' (asymptotically) at a single common point p (a so-called ideal point), which also happens to be the center of both horocycles. Everything is nicely illustrated in this Wikipedia enty on horocylces.

There is no contradiction to the answer of @tswett, since the ideal point p is only asymptotically contained in both horocycles (and at infinite distance from all other points of the horocycle).

Well, consider two concentric circles, of different radii, in 3D space (you can call them "rings" if you like). That they are concentric does not mean they are coplanar. If two such non-coplanar rings are projected onto 2D space from an appropriate angle, the projected image will show them intersecting at either two points or four. One can, perhaps, conject(ure) that a pair of concentric hyperdimensional "rings" of different radii could be configured in such a way that their projection into 3D space would intersect any arbitrary number of times, including three. They wouldn't look like circles or "rings" in 3D space, of course, but by this reasoning, that doesn't matter.