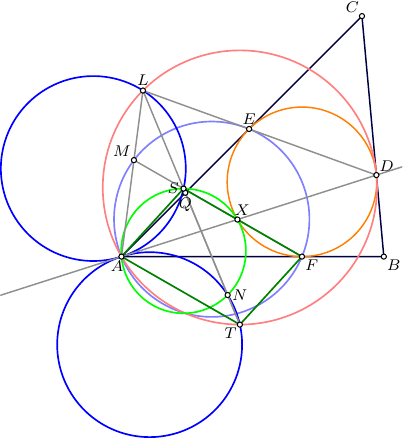 Let $ABC$ be a scalene triangle and let its incircle touch sides $BC$, $CA$ and $AB$ at points $D,E$ and $F$ respectively. Let line $AD$ intersect this incircle at point $X$. Point $M$ is chosen onthe line $FX$ so that the quadrilateral $AFEM$ is cyclic. Let lines $AM$ and $DE$ intersect at point $L$ and let $Q$ be the midpoint of segment $AE$. Point $T$ is given on the line $LQ$ such that the quadrilateral $ALDT$ is cyclic. Let $S$ be a point such that the quadrilateral $TFSA$ is a parallelogram, and let $N$ be the second point of intersection of the circumcircle of triangle $ASX$ and the line $TS$. Prove that the circumcircles of triangles $TAN$ and $LSA$ are tangent to each other.

Here is the picture of the story, so that the community can see where the composer of the problem placed almost all letters of the alphabet. 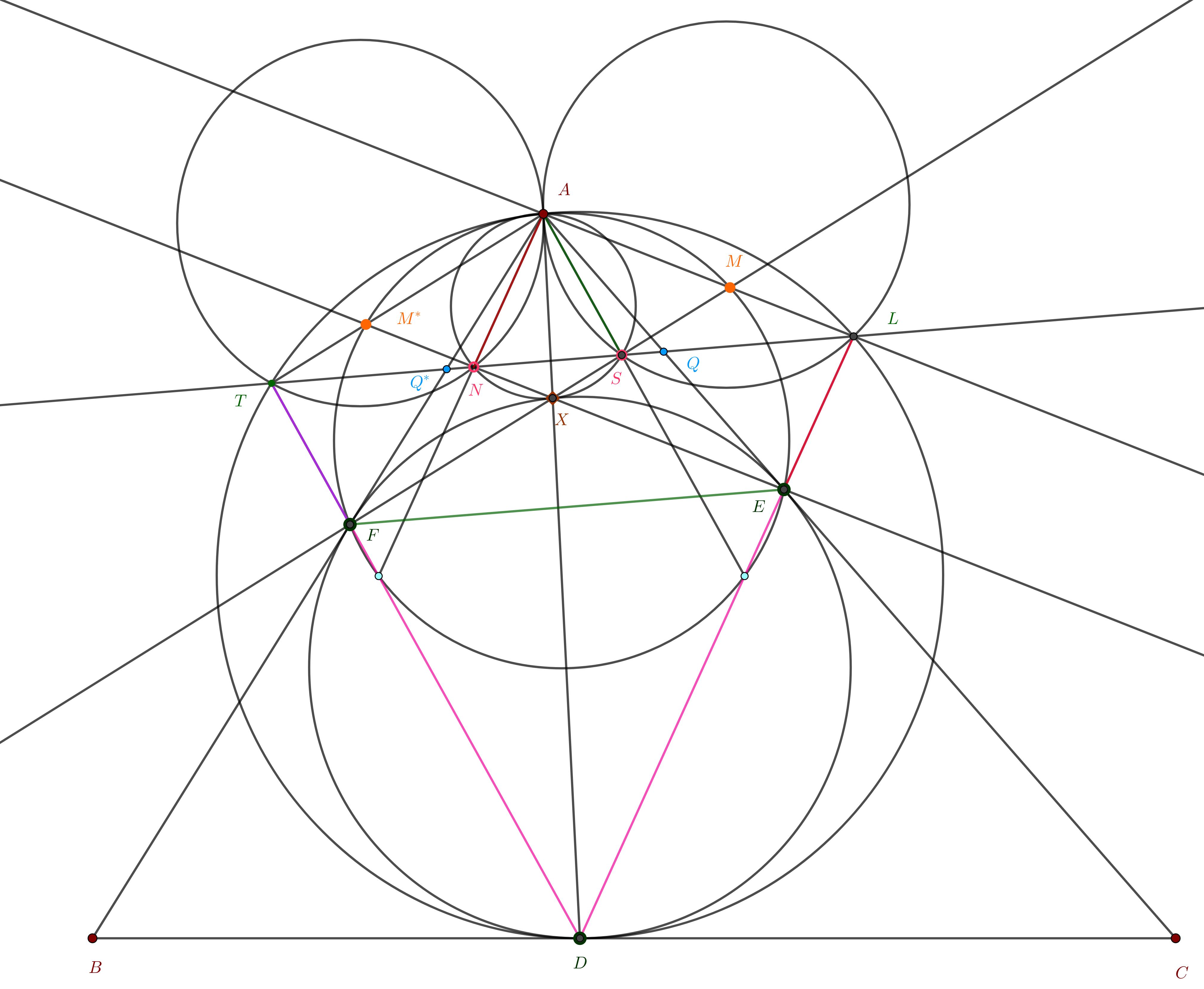 The picture also reveals some points that the problem missed to introduce, although this would have been a good chance to use the alphabet, so the composer really wanted to make a puzzle out of it.

Psychological digression. Please skip, if the next few sentences feel annoying. This insertion is only a psychological hint and survivor guide for potential Mathematics Olympiad problems in the same style.

I have often seen such problems in my youth, the "composer" considers a given situation with easily introduced points, that have easy properties and are introduced in an easy order. Form the easy properties (for instance intersection of lines) one obtains more complicated properties (the intersection of lines lies on one circle). Then one reverts the order of introduction of points, and each point is introduced in the most complicated possible manner. Now one can proceed in two ways. One can "accept the challenge", and use the introduced properties with all difficulties that may occur giving the "sincere proof", or one ignores the statement, for "difficult points" $X,Y,Z\dots$ in the problem one introduces (apparently with no connection to the problem) own points $X', y', Z', \dots$ possibly in other order, shows a lot of simple facts with $X', y', Z', \dots$, then finally shows (possibly in other order) that $X=X'$, then $Y=Y'$, then $Z=Z'$, then... (by uniqueness of the construction), and suddenly the problem is solved without pain. This is the reverse engineering attempt to solve, maybe mirroring exactly the way the problem was "composed".

Note that in the given case, the points $B,C$ have no role, so we will delete them from the picture. Such "beauty errors" are considered in chess composition, well, a displaced parallel maybe, as "true errors", and the composer is urged to restate by giving only the essential. But we are here not in a beauty contest, and even more, it is an important step in the mathematical thinking to restrict to the essential, so let us do this.

We will solve the problem by introducing only some of the letters, and showing that the two circles $(TAN)$ and $(LAS)$ are tangent in $A$, the common tangent being... $AD$. Doing this feels already like solving only half of the problem. We use the symmetry / the similarity of properties of the points involved in the construction.

Let us restate, and after each construction we make some simple observations outside the statement, so that finally the statement comes with solution. We show first the picture: 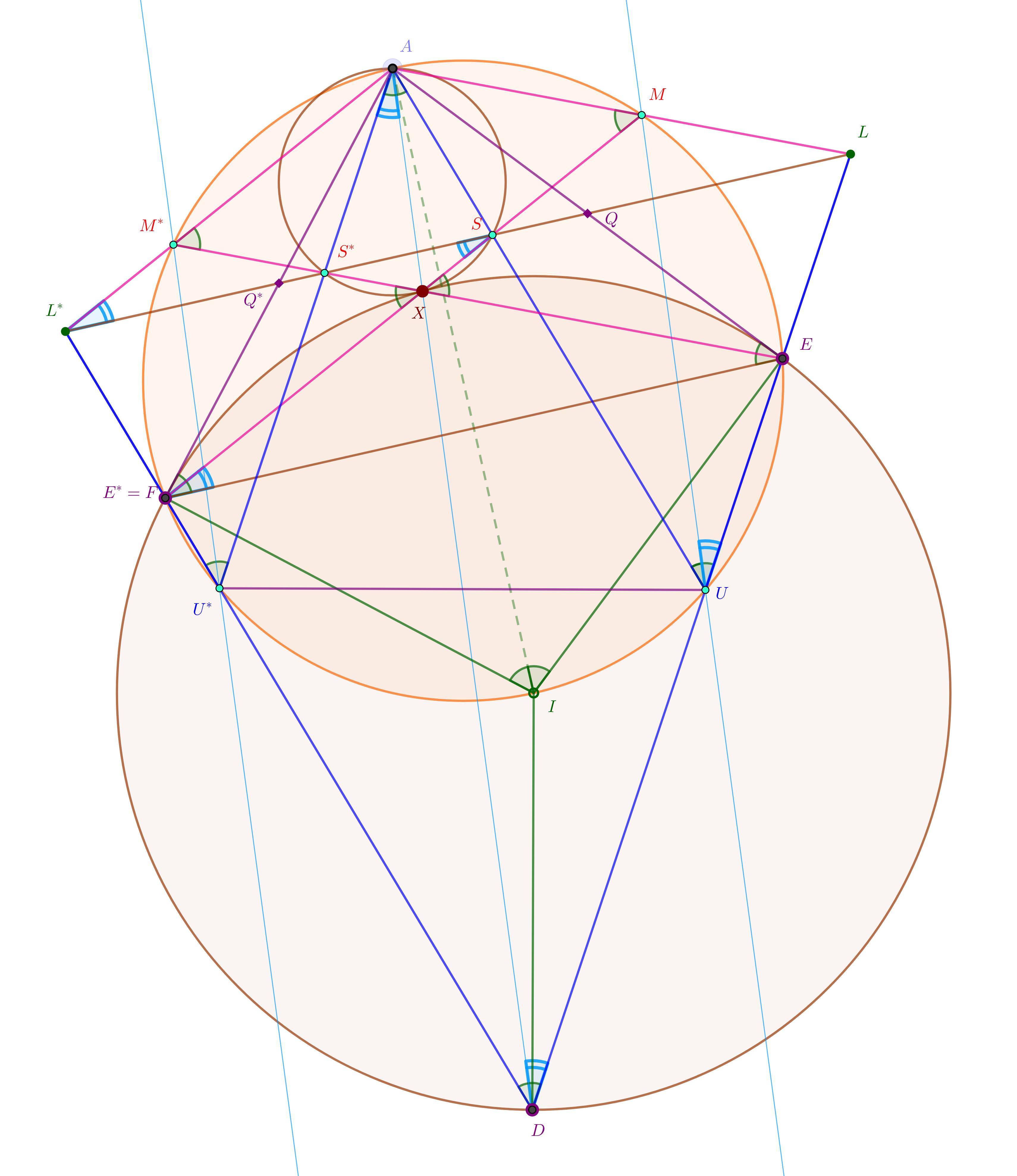 Let $\Delta DEF$ be a triangle. For reasons that will be transparent soon, we may like to use $E^*=F$ as an alternative notation.

We draw the circle $(AEIE^*)$. The lines $DE$ and $DE^*$ intersect this circle for the second time in points denoted by $U$ and respectively $U^*$.

It remains to check that the complicated constructions in the OP lead to the same points.

4
Euclidean Geometry Area Problem
2
How I can show that the point P (Miquel point) is in the circle formed by the centers of the other 4 circles?
13
Task "Inversion" (geometry with many circles)
1
A geometry problem - proving that points are concyclic
1
Prove that the angle is 90°
3
Show that $A-$excircle is tangent to $(AST)$
2
Proving line is tangent to circle.
1
Nice geometry question to prove tangency
4
Geometry problem proving that all lines $DE$ passes through one point