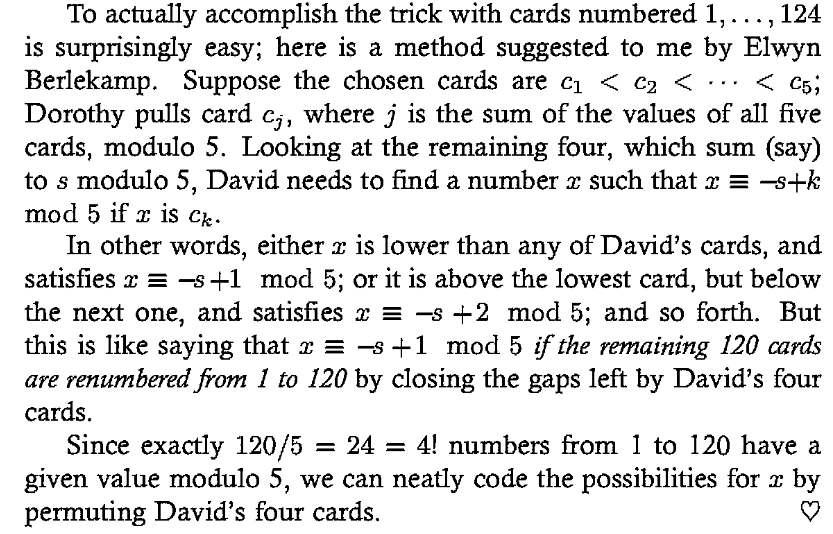 Epilogue: I found Michael Kleber's The Best Card Trick. It gives a clear presentation. However, the new numbering system modulo 5 is best explained by the answer of @LonzaLeggiera below. This answer also has some good references on this problem.

Deck of 124 blank cards numbered one through 124. Spectator randomly picks any five cards. The magician picks one of those five cards as Target and has spectator put it in their pocket. Then the magician arranges other four cards in a sequence that his assistant can decipher to determine the Target card.

ENCODING (magician) calculation synopsis: mod five on all five cards to determine 1-5 value (if zero make it 5) position of the Target card. Then Target (1 thru 124) value plus constant 5 then minus the 1-5 value then divide by constant 5 (round down) to get the 1-24 value to rearrange the four remaining cards.

DECODING (assistant) calculation synopsis: Mod five on the four cards giving 1-5 value. Look at four cards sequence and determine the 1-24 value then multiply that by constant 5 then add 1 then subtract the 1-5 value. Adjust up by 1 for each of 4 cards passed or hit. This arrives at the Target card number.

Details about the 1-24 number used by both the encoding and decoding calculations: Note that there are 24 combinations that the four cards can be arranged in and if say 16 is the combination number this means to use the 16th combination. Here is how we figure that combination: A. there are four groups of six combinations B. those four groups are 1-6, 7-12, 13-18, 19-24 C. the 16 falls in the 13-18 group which is the third group this means that the first of the four signal cards must be the third highest. Now for the other three cards they use the standard Fitch Cheney signaling sequence of 1-6 using the low medium high technique to pinpoint which one of the six by: LMH=1 LHM=2 MLH=3 MHL=4 HLM=5 HML=6 so in our example 16 is the 4th number within the 13-18 range therefore the remaining three cards must signal the number 4 therefore the 3 numbers must be in medium high, low, order in our example of 16. Note that the 1-24 number is NOT the target number but is used to help calculate the target number.

Note that instead of blank cards numbered one through 124 you could use three regular decks and write in big numbers on their backs: redback cards 1-52 blue Back cards 53-104 green back cards (only 20) 105-124 or instead of carrying a fat deck you could have a random spectator call out five numbers in that range (1-124) and you the magician write those numbers on a large pad (so all can see) and work from there.

Note that mathematicians have referred to or described the 124 trick but in terms that are difficult for non-mathematicians to understand therefore I Larry Finley and brother David Finley have tried to state this in a way that an average magician can understand and do this trick.

I have also written a spreadsheet that can serve as the assistant on a cell phone thereby allowing the magician to do this 124 trick anytime without having a human assistant.

According to my research mathematicians who have written about this 124 version: Elwyn Berlekamp (deseased) Stein Kulseth Gadiel Seroussi Michael Kleber and wife Jessica Polito Bill Cheney Norman Do Ravi Vakil Colm Mulcahy Tsai Simonson Tara Holm Art Benjamin Persi Diaconis Note according to my research Michael and Jessica are the first I can find to actually perform the 124 version before live audiences in 2001-2002.

12
A magic trick - find out the fifth card if four is given
58
An illusionist and their assistant are about to perform the following magic trick
3
52-card trick for a larger deck?

3
52-card trick for a larger deck?
1
How is this card/paper plate magic trick done?
15
What is the mathematical explanation for this trick?
1
A combinatorial card-trick
1
Determining opponents card magic trick
3
How does the three piles magic trick work?
2
A Logic Puzzle: Explanation Of The Solution
3
Version of Fitch Cheney's card trick
2
Explanation of Freeman Dyson's solution of the counterfeit coin problem