Given $b=\exp(u \exp(-u))$ they have shown that convergence occurs for $b$ of the construction with $|u|<1$ and divergence with $|u|>1$. They also stated that with $|u|=1$ such that $u=\exp(2 \pi î /c )$ and $c$ rational (or in more explicte terms that with some positive integer iteration-height $h$ there occurs $u^h=1$), then the orbit of the iteration converges to a fixpoint, while with $c$ being real and irrational the orbit diverges.

The found pictures gave an interesting variety of pictures of the orbits depending on the above classification. 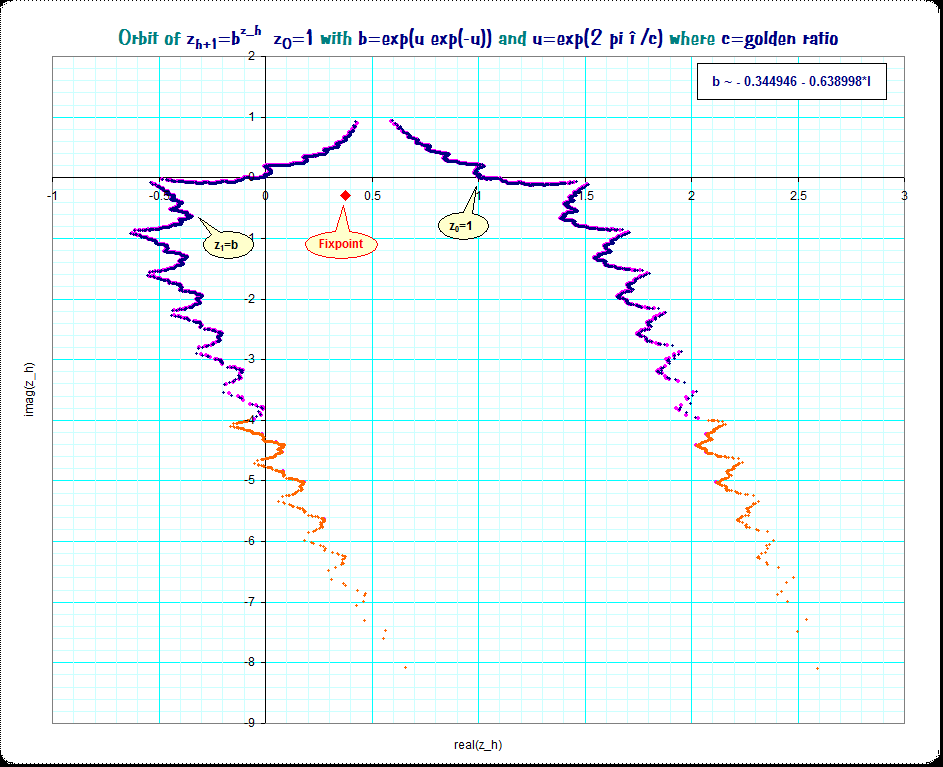 Now towards my question: The picture using that $c= \small "golden-ratio"$ shows a pattern which suggests two parallel orientations in that orbit, which I didn't observe in the other above classes. Usually the orbits for the irrational bases look more like some closed star-form shape with fractional borders and excurses "towards infinity", but here I find a somehow "most simple" shape.

It is much time-consuming to compute the orbit to millions or billions iterations, but I did a fairly usable list of that iterations ($1e8$). The indication of that parallel orientations becomes even stronger with longer orbit.

a) Can we prove, that the continuation of the orbit fills out the pattern so far, such that we have that two partial orbits along two parallel directions?

b) What might be the reason for this remarkable shape?

Update This question seems to touch too deep water and possibly cannot be answered in this Q/A-style. I thus "accepted" the informative, helpful and inspiring answer of @SheldonL to "close-the-case". However, more informative answers would still be much welcomed.

here is a rotated image to help the intuition for the a)-question: 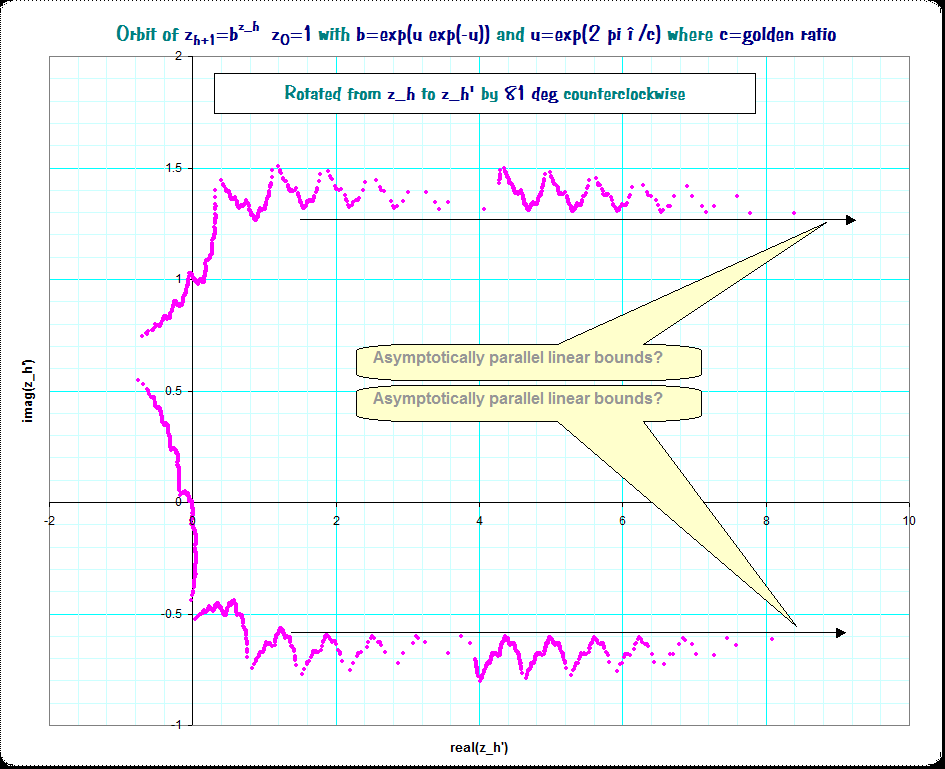 Update: It might be interesting (and possibly helpful to avoid misleading ideas) to see, that selecting a different startvalue $z_0$ can lead to an asymptotically closed(?) (and dense?) curve. I used $z_0=1.1+0.1I$ finding that initial orbit for the first $2000$ iterations: 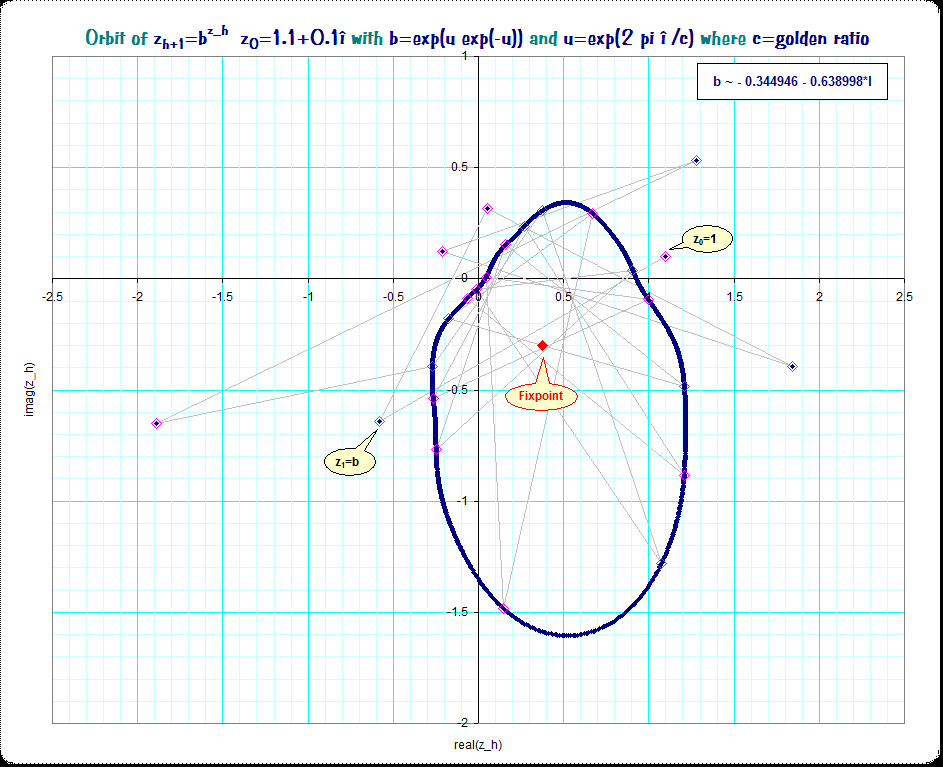 To see the initial behave the first $20$ or so iterates are connected by the thin grey line and have an additional frame around the dots. 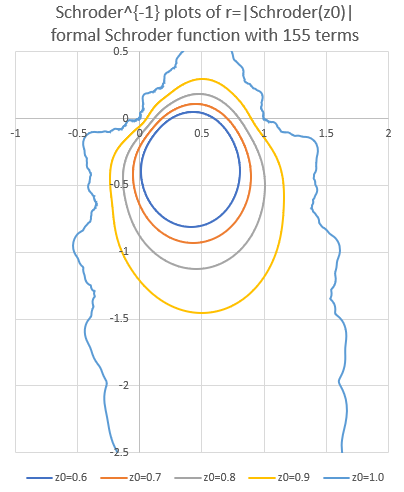 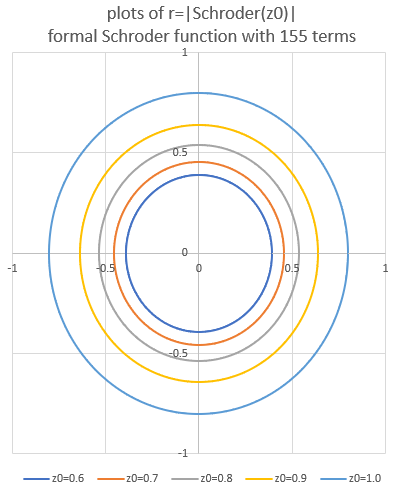 The Op asks, "I have been interested in the reason for the difference between rational and irrational c in this problem and looked at graphs of the orbit". Since the infinite continued fraction representation of c, where $\lambda=\exp(\frac{2\pi i}{c})$ effects how smoothly the mapping of $\lambda^n$ fills in the unit circle, it effects how nicely the Schroder function behaves and whether it converges or not. If c is rational, the Schroder function does not converge. That is why a lot of these Siegel disc plots use $c=\phi$; the golden ratio, since it has an ideally behaved continued fraction representation.

The fractal structure is governed by the logarithmic singularity of 0, as the Op noted in the discussion: "...if c is irrational and the orbit passes $0 \mapsto 1 \mapsto b \mapsto b^b ...$ then the mechanics of the continued fraction (here of c) govern that high-index iterate appear nearer and nearer to any earlier iterates. This is of course true for $z_1=0$ and even more significant for $z_0=\log_b(0) \to \infty$. So there are infinitely iteration indexes h coming nearer-and-nearer towards $\infty$...."

The Op's initial fractal plot is a plot of the Siegel disc, which is the fractal limit of the convergence of the $\Psi^{-1}(z)$ function. http://en.wikipedia.org/wiki/Siegel_disc

Here is one more picture, showing the iterates of $z \mapsto b^z$ starting with $z_0=0$; and then multiplying each point $z \cdot \log(b)$, so that the logarithmic singularity goes to negative infinity for $\log(z)$ where z is in the neighborhood of zero; as expected. Here the vetical part of the logarithmic singularity covers a little more the $\pi i$ which also makes sense. 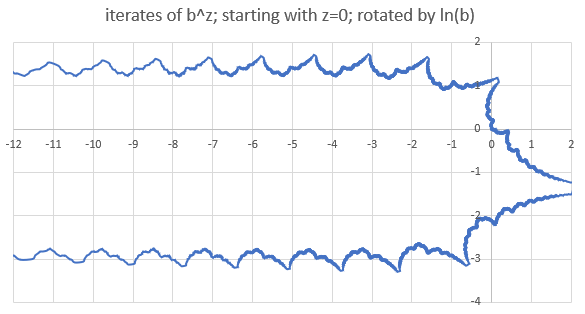 
For the subject of initial values $z_0$ thrown in the comments of @SheldonL I show a composite picture made from three $z_0$ on the real line between $0$ and $1$.

Surprisingly each of three rather randomly chosen initial values produced its own shape ("equator") which does not change its visual image when iterated further but only fills the circumference of the shape/"quasi-dense curve" more densely. 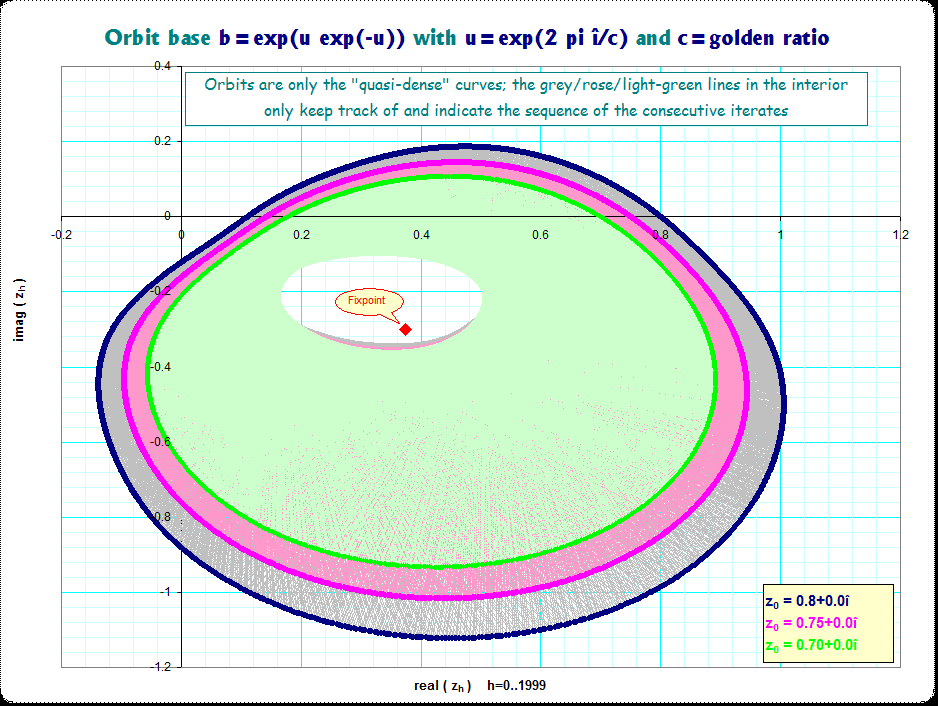 It's worth to remark that when $z_0$ taken from some random value, say $z_0=1.5+1.3 î$ then this orbits even into a finite period of $3$ accumulation/periodic points - so that observation of "quasi-dense equators" (so-to-say) is not a general effect of this type of infinite iteration. The following picture shows the image for $z_0=1.1$ to give a bit more context: 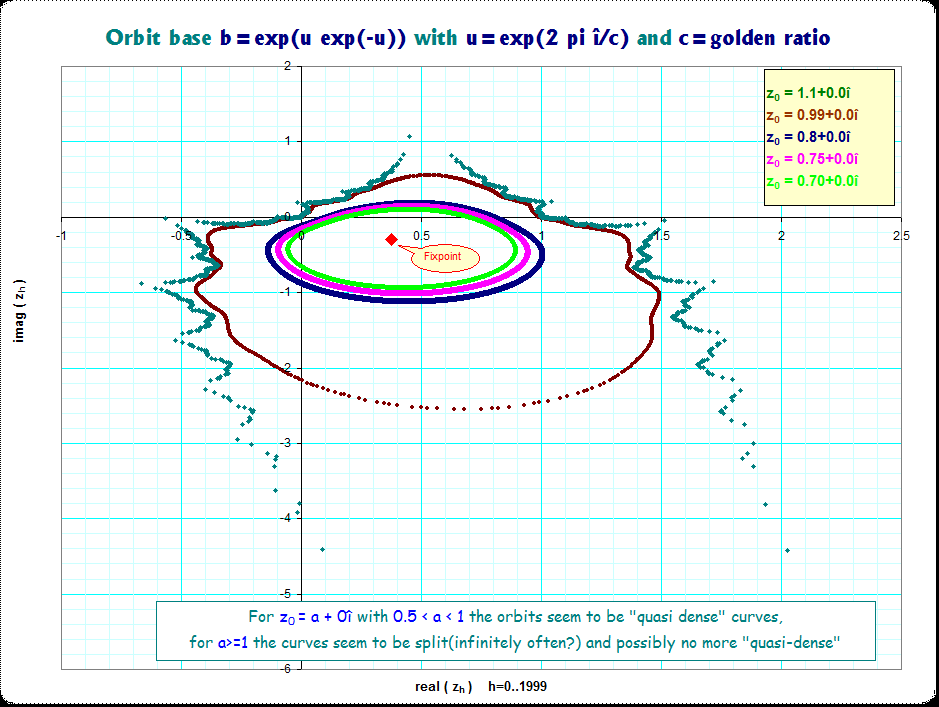 Not the answer you're looking for? Browse other questions tagged fixed-point-theorems tetration or ask your own question.