Because non-real roots come in pairs, it must have 4, 2 or 0 real roots. Following Descartes' rules of signs, it either has one negative (real) number and one or three positive numbers.

Your polynomial can be factored into two quadratics using difference of squares:

Can you take it from here?

The generic way is to use an intermediate value theorem.

Moreover, between any two zeros of differentiable function there is a zero of its derivative.

Since the function is positive at "infinities", but its derivative is a polynomial of third degree (i.e. negative at $-\infty$) we conclude, that $x=0$ is a local minimum of $f$. Subsequently $x=1$ is local maximum, and $x=2$ is local minimum once again.

One possible way to analyze the roots is to try and plot the graph of the function and see where it goes from negative to positive.

For this purpose we first see the end behavior of the graph. Note that for very large negative and positive values, the only important term is the leading one which is $x^4$. Hence as we approach $-\infty$ or $+\infty$ the value of the function is positive.

Next we need to find the turning points of this graph, i.e., where the slope of the function goes to zero

The above equation has roots at x=0,1,2 which means the function has 3 turning points. These are the only places where our function can change its behaviour, i.e., from increasing to decreasing or decreasing to increasing.

Calculating the value of the function at these points we get

Now we know the behaviour of the function

Hence we have 2 real zeros. 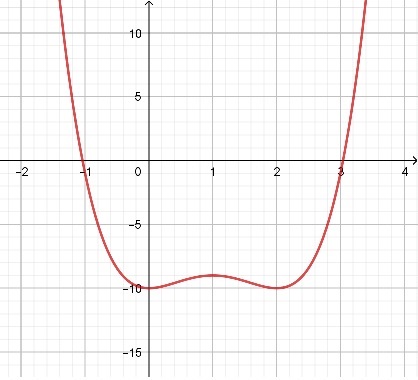 Not the answer you're looking for? Browse other questions tagged algebra-precalculus polynomials roots quartics or ask your own question.