Intersection of ray and not quite helicoid?

What I need is a way to take a ray defined by $origin + t * direction$ or $o + t*d$ and find the intersection if it exists on the surface.

I'm not sure what this shape is called, it is sort of like a helicoid, but it has a different equation, it isn't defined by lateral lines with respect to $p$ like a helicoid is, and twisting the line segments completely around does not produce a 3d shape like a helicoid would, it produces a plane. I can't look up what the intersection would be because of this.

here is the type of shape and intersection I'm talking about: 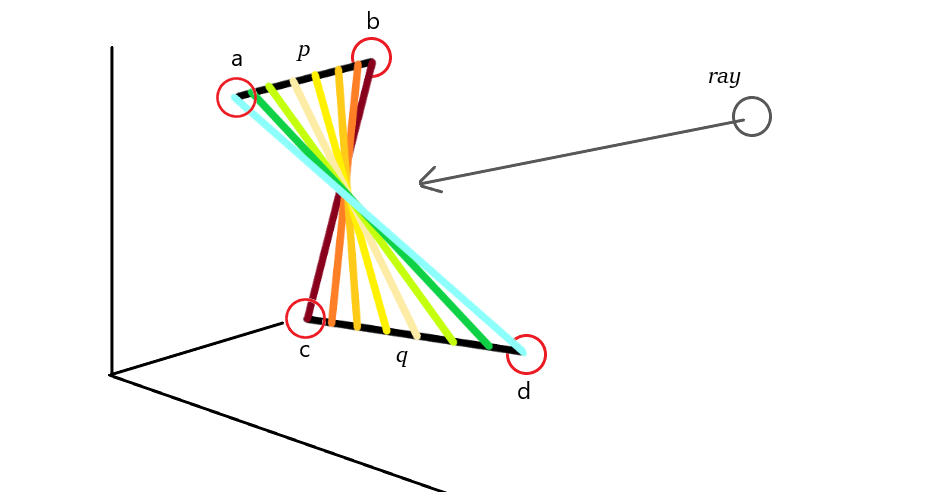 (there would be no holes in the surface, the lines have spaces to illustrate where each line exists).

I know the set up for the equation must look something like:

but I'm not entirely sure what the other equation is. I know its an equation that spits out a different equation of a line segment depending on the location, but I don't know how to parameterize it.

I'm thinking I can rotate the point to make $p$ a line oriented on the origin laying flat, and considering that if you move a point along $p$ half way, the resulting line segment will end up half way on $q$, I can use that to take the x position of the transformed point to directly correspond to a point on $p$, and knowing the percentage along $p$, I'll also know the point on $q$, and then it is a simple test for point line-segment intersection.

so the equation for the surface should be something like (excluding bounds checking and edge cases):

but having a hard time trying to bring this back into a parametric form I can solve for so I can figure out how to find the intersection with a ray.

Not the answer you're looking for? Browse other questions tagged geometry parametric or ask your own question.

1
ray - parallelogram intersection in 2d
0
Ray-Lens Intersection
4
Verify that two line segments do not cross, or projected intersection is not on either line
1
Ray-sphere intersection: t-value of the intersection points
3
Intersection of ray with circle in 3D subject to endpoint and orientation constrains
0
how to check whether the point is inside or not
0
Ray-plane intersection point
1
Region created by locus of reflected lines
1
How to determine the bounding curve of a moving circular sector?