Is there such thing as a "3-dimensional surface"?

The reason I'm asking this question: I work at the National Museum of Mathematics and, amidst my sundry duties (which generally have nothing to do with the exhibits), I do have the authority to alter some of the text in the exhibit descriptions, being the only on-site, full-time, PhD-holding mathematician who works there. When I see things that I know to be wrong, I seek to fix them (though it can take a long time to get to it). I thought it would be interesting to, in a case where I'm not sure, look for a consensus among the community in this way.

The usage of the phrase in question refers to a surface embedded in $3$-dimensional space. In particular, an exhibit in which one can view $2$-dimensional solutions to equations in $3$ variables is advertised as: "Bring formulas to life by exploring the multiple number of unusual three-dimensional surfaces they can create."

My opinion is that a surface is, by definition, 2-dimensional, and that the only reason someone would use the phrase "3-dimensional surface" is if they are not familiar with proper mathematical nomenclature. However, I want to know what the community thinks.

Now that I no longer work at MoMath, I can say that I was reprimanded by the Director for this post, who also refused to consider any change to the text in question. For context, a colleague found a typo in someone's last name in other exhibit info, and fixing that was also rejected. People should know that that Museum needs a lot of help, politically (the math errors are the tip of the iceberg). I did my part but more people from the math community should look into this and speak up.

I have seen some authors who use "surface" as an equivalent of "manifolds". 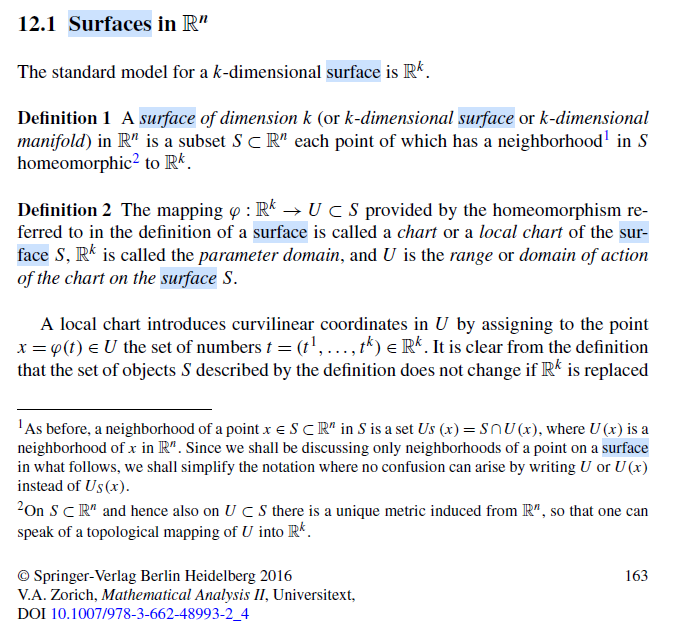 Personally I don't like it when someone refers to an $n$-dimensional manifold ($n\neq2$) as a surface; it is contradictory to intuition. But I wouldn't say it is wrong.

However, in your case, I do think it is wrong to confuse a "3-dimensional surface" with a "2-dimensional surface embedded in $\mathbb R^3$". I'd suggest changing it to "Bring formulas to life by exploring the multiple number of unusual surfaces they can create in three-dimensional space". (The audience probably wouldn't notice a thing.)

Although as a mathematician I would never use that terminology, your target audience is probably non-mathematicians. Non-mathematicians do understand "three-dimensional surface" better than "embedding of a surface in three dimensions". I think I would leave the text as it is, except replace "multiple number of" by "many".

You‘re correct: surfaces are by definition $2$-dimensional manifolds. Some (not all, cf. the Klein bottle) can be embedded in $\Bbb R^3$, which seems to be what the text is referring to. This enables us to think of an embedded surface as a $3$-dimensional object (the extrinsic view). Nevertheless, the abstract manifold as a topological space with an atlas is $2$-dimensional (the intrinsic view).

Depending on what the exhibit is focusing on this might warrant a more detailed explanation.

I agree with the other answers that

Bring formulas to life by exploring the multiple number of unusual three-dimensional surfaces they can create.

I also agree that a nonmathematician will understand what you mean, and will not object.

You can make your meaning both clear and correct with a simple change:

Bring formulas to life by exploring the multiple number of unusual surfaces they can create in three dimensions.

(This is essentially what @trisct suggests, said a liitle more compactly.)

Depending on who your target audience is, it may not even be necessary to include the terminology relating to dimensions.

For example, if you're displaying this to young kids who are there by their own volition, you may spark their curiosity by simply saying "Bring formulae* to life by exploring the many unusual surfaces they can create," without overloading them with too much vocabulary about "dimensions" and "space." My understanding is the focus of this exhibit is to show how some algebra can be represented visually, which is really cool. Draw attention to this, without over-complicating it (while still making it factual!)

If you desire to keep information about dimensionality in the exhibit, then as stated in the other answers, I feel it is important to not talk about 3-dimensional surfaces, as that will cause a lot of confusion for anybody who learns about this for the first time from this exhibit (speaking from experience here! I remember learning about surfaces from my math teacher who referred to them as 3D objects and it took me a long time to disabuse myself of that erroneous notion :< ); instead, it should be made explicit that these are surfaces in 3D space. In the current day, with the advent of 3D movies and VR technology etc, any clued-up kid (and let's face it, most kids interested in a math exhibit are probably also into their video games and cool tech) are definitely going to have a good enough intuition of what "3D" means.

*Side-note: I was under the impression that "formulae" is the plural of "formula" -- has their been an evolution of the English language that has made "formulas" an acceptable pluralization of "formula?")

Not the answer you're looking for? Browse other questions tagged terminology definition surfaces or ask your own question.