I have an accoustic setup which used a prism (yes, it'll be a math question). A ray is fired at the prism such that the incidence is normal to the long side of the prism, and arrives directly at its right angle. In the 2nd part, the prism is rotated on an axis that is on its right angle, and another beam is fired along the same trajectory as the 1st one.

In this image, the reference triangle (in green) has an incident beam at 90 degrees, while the rotated (purple) triangle has an incidence angle of 16.2 degrees after rotating the prism (not to scale, just to show): 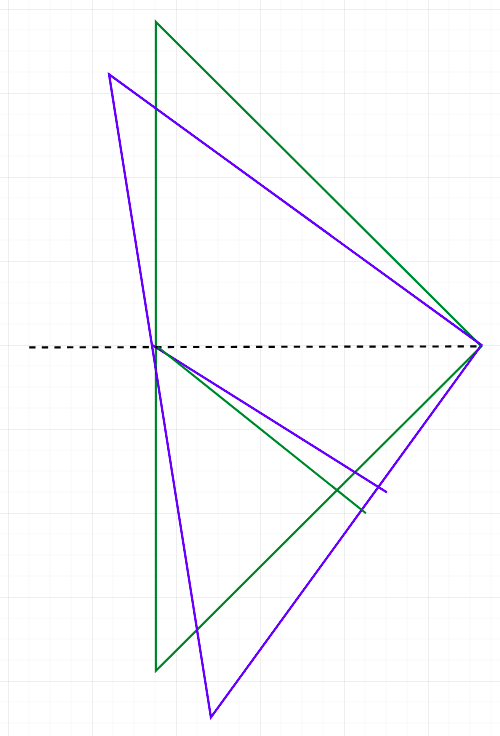 I basically try to calculate the speed of the incoming acoustic wave in that material. There are specific angles which yield different types of waves traveling at different speeds.

The value I arrive at, for an incidence angle of 10.1 degrees, is slightly off theory for that material. I thought it was within my margin of error, but then the value I get for another type of wave at 16.2 degree is really off. I think my error may actually be neglecting the following:

As the prism rotates, the point of contact with the incident ray moves further to the left, on the image. Short story:

How can I calculate, as a function of angle of rotation, how far left the point of contact with an incidence as shown by the dotted line has moved?

I already account for the fact that the ray travels further in the prism. Both rays in the prism hit the opposite side at 90 degrees (that's why they return to the sensors and I can measure the response), but since the purple one hits the prism further up the long line so to speak, it travels a greater distance. The trigonometry for that is easy.

EDIT: I tried seeing it as a rotation within a circle (with both free corners of the triangle on the perimeter of a circle). That gives me a maximum value for that difference, since radiux*cos(45) = 0.707radius if I were to rotate the prism 45 degrees (which means the incident ray would be along one of the smaller sides of the isocele triangle).

However, that doesn't give me the distribution of the distance as a function of angle. I wouldn't be linear. If I use a linear approximation (e.g. just do 16.2/45 * prismside) it gives a better result, but of course I'd rather have the exact value...

Assume the hypotenuse is L and, if the angle of the rotation is $\theta$, the contact point moves to the left by

Here is the derivation:

Consider the triangle ABC in the purple prism, where A is the right-angle vertex, B is the mid point on the hypotenuse, and C is the point of contact with the ray. Since B is the midpoint, ABC is a right triangle with ∠BAC = $\theta$. Thus,

where BC is just the left shift of contact you are looking for and BA = L/2.

1
How to find what point a wave is reflected off
5
When $\cos(\theta) = 1/8$ it's easy to show $\theta$ is an irrational angle. Is it algebraic?
2
Calculating Rotation from centroid
1
Right Angle Triangle Sets
0
exact value of trigonometric equation given certain (yet vague) conditions
1
Help calculating a point in 2d space on a rotating right angle triangle
1
Find Center of Circle Using Triangle Data
1
Prove that rotating a set of points about the origin rotates the centroid by the same amount
0
Determine if a point is in a rotated hyperellipsoid