Proof of proposition I.4 in Euclid's Elements ("Base angles of an isosceles triangle are congruent")

I have difficulties in understanding the 5th proposition of Euclid's elements in the first book: 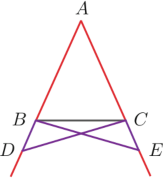 I don't undestand this part:

Proposition I.4 which is SAS, states something different:

Proposition I.4 (SAS). If two triangles have two sides equal to two sides respectively, and have the angles contained by the equal straight lines equal, then they also equal.

Proposition I.5 in the text I'm reading is considering only $BC$ and not two equal sides and angle comprised between them.

In triangles $BDC$ and $CEB$ you know that:

Euclid was forced to use SAS because he proved SSS only in later Proposition (I.8). He added that $BC$ is in common probably to make clear to the reader that he was referring to Prop. I.4 (see Heath's comment quoted in Mauro ALLEGRANZA's comment below).

1
Proof of Prop. I.27 in Euclid's Elements
1
How to prove Euclid's Proposition 6 from Book I directly? (as opposed to proof by contradiction)
0
Kiselev's geometry Problem 67: In an isosceles triangle, two medians/bisectors/altitudes are congruent
2
Drawing an isosceles triangle with Cevians from the base
4
If two medians are congruent... is the triangle isosceles in a Hilbert plane?
1
If the bisector of an angle of a triangle also bisects the opposite side, prove that the triangle is isosceles.
0
Verifying a line is tangent to a circle circumscribing a triangle
2
Quadrilateral with two congruent legs of diagonals