I randomly had a thought about what proportion of quadratics don't have real $x$-intercepts. Initially I thought 33%, because 0,1,2 intercepts, then I thought that the proportion of 1 intercepts is infinitesimal. So I then thought 50%, as graphically half the quadratics would be above the $x$-axis, the other half below.

I hypothesise that it averages $3/8$.

There may be a fallacy to my approach of finding the 'proportion'. Fundamentally, it is the probability of getting a quadratic with no $x$-intercepts. However, I am not sure.

For starters, even picking a "random number" is something you can do in many ways:

(Note that "a number uniformly randomly chosen from all real numbers" is not possible, simply because the integral of the density function over all real numbers (i.e. the total probability) must be $1$, and no constant function does that.)

Now, with that in mind, here are some ways you could pick a random quadratic:

All of these are plausible interpretations of "a random quadratic", depending on where the randomness is coming from. They will all (in general) produce different answers to questions like these.

Now you could ask for your particular way of choosing a random quadratic, why the probability of having no x-intercepts is what you found it out to be. I think another of this question's answers points you in the right direction for that.

The problem is, of course, that this "coefficient space" has an infinite volume: $a$, $b$, or $c$ can be arbitrarily large. What's more, the region of coefficient space corresponding to polynomials without intercepts is also infinitely large: for any polynomial without an $x$-intercept, you can multiply it by any real number and get another polynomial without an $x$-intercept. And if mathematics has taught us anything, it's that if we try to divide ∞ by ∞ we cannot expect a meaningful result.

You can, however, place bounds on the values of $a$, $b$, and $c$, so that these volumes of "coefficient space" are finite. In your code, you picked the quantities $(a, b, c)$ with uniform probability from the range $(-10^5, 10^5)$. This corresponds to the region of coefficient space below: 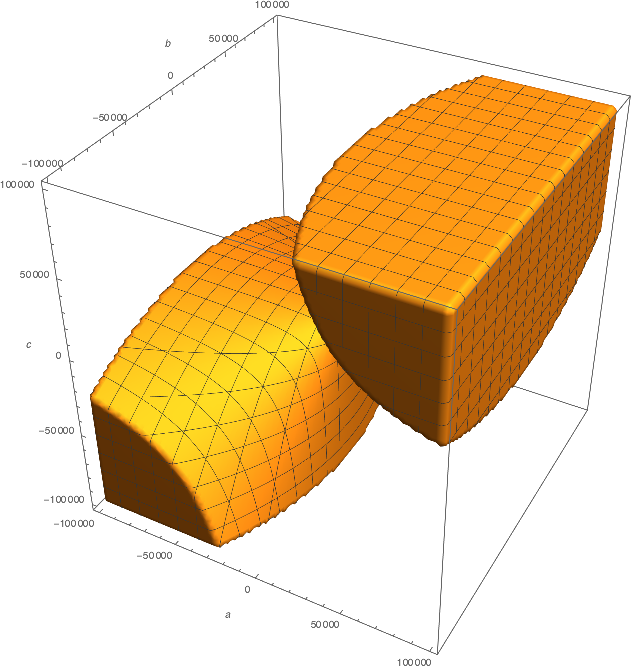 On the other hand, you could have also decided to pick all your coefficients such that $a^2 + b^2 + c^2 < (10^5)^2$. This would correspond to allowing $a$, $b$, and $c$ to lie in some spherical region of "coefficient space". Spheres are nice, right? Everybody likes spheres. 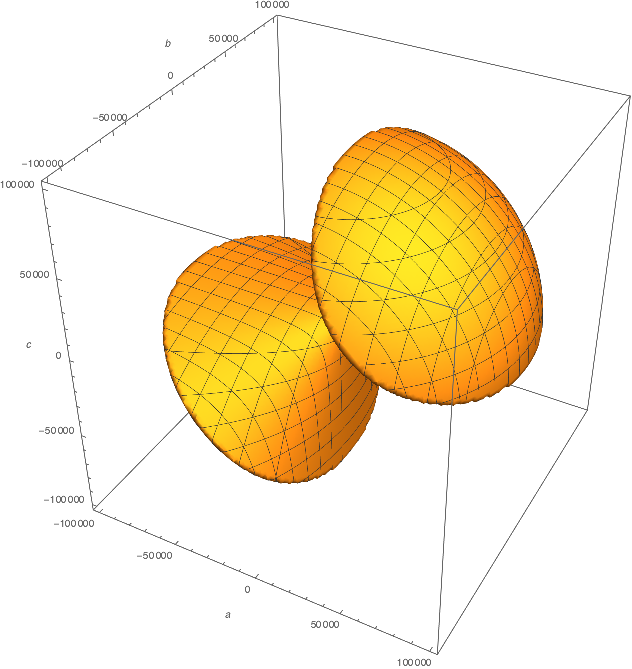 The fraction of this region out of the allowed spherical volume in coefficient space is (again, relying on Mathematica) is only about 0.3514..., noticeably less than 3/8. The region of coefficients you allow, and how you parametrize them, turns out to make a difference in what your final answer is (which is what some of the other answers are trying to point out.)

Now that you said that $a,b,c$ are all uniformly distributed on $[-n, n]$, your problem translates to this:

While other answers have pointed out the problem of defining a random quadratic, I will argue that there are, indeed, rather interesting measures on the quadratics.

Let $ax^2+bx+c=0$ be the equation of a parabola. Il we multiply all the coefficients by some constant, we get e.g.

which is another equation of the same curve. Hence, instead of taking for $(a,b,c)$ general real numbers, we can normalize, for instance by adding the constraint $a^2+b^2+c^2 = 1$. Then $(a,b,c)$ lie on a sphere, on which there is a natural probability measure: the uniform measure. The simplest way to simulate this setting is to take for $a$, $b$ and $c$ three independent standard Gaussians; then $(a,b,c)/ \|a^2+b^2+c^2\|$ is uniform on the unit sphere.

Note that (as per Leftaroundabout's comment) this is just one possible normalization, and thus one possible measure on quadratics, called Kac's random polynomial. There are other reasonable measures. However, this one in particular gives rise to some interesting and not too difficult pieces of mathematics.

Under this setting, and if I'm not mistaken, a quick computation gives me that the probability of having no $x$-intersect is:

The formula above is due to Kac (1943). I will let somebody else try to find a closed form, as there are poeple here much better than me at identifying and computing integrals.

Since you used a computer, $a, b, c$ must have been in a restricted range. Try altering that range and see how it affects your answer. Even if you have a super computer with an enormous but still finite range of numbers, it will still tell you nothing about the case for all numbers.

Even a dream computer without limits would have a problem as you cannot pick evenly from an infinite set.

Other answers have done a good job at showing this mathematically, but I feel that a bit of visual explanation would help to solidify exactly why there is a difference in these two answers of $1/2$ and ~$3/8$.

Below, I have made a graph of all quadratic equations of the form $a(x-b)^2 +c$, for every combination of $a$, $b$ and $c$ in the closed interval $[-4,4]$, with a step size of $0.5$. The exact numbers are not relevant to this answer (though it is relevant to say that the x-scale and y-scale are equal, and both are linear).

For each parabola, I've only plotted a small section near the vertex. The line of each is colored according to how many x-intercepts it has: 0 is red, 1 is grey, and 2 is blue. 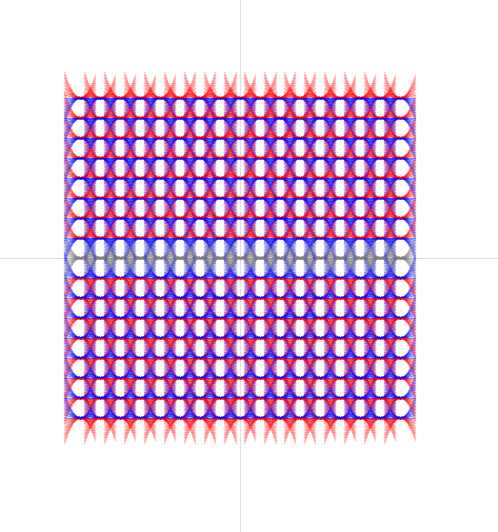 A visual inspection reveals that there is roughly an equal number of red and blue parabolas, and both vastly outnumber the grey ones. The exact counts in this graph are:

Now, let's look at the same search space, but using the form $ax^2 +bx+c$. The graph looks quite different:

Again the grey are outnumbered, but we see vastly more blue than red. The exact numbers here are:

As we can see, the 'wings' of this graph are exclusively blue, meaning that all such parabolas have two intercepts. This is what skews the result away from $1/2$.

For those interested, the language I used to generate these images was Processing, and the code may be found here: https://pastebin.com/geLya3jQ. (Why? Mostly because I don't have much experience with Mathematica, etc.)

We need the probability that $b^2 < 4ac$. When $a$ and $c$ have opposite signs this condition is never satified; this occurs in 4 of the 8 octants of the problem domain. So we need only look at the other 4 octants. These are all related by symmetry, so we can choose one representative. Here we'll choose the octant $a \in [0,n], b \in [0,n], c \in [0,n]$. The relevant volume of the domain is given by

Carrying out the integration

This is the volume of one octant; the volume for the 4 octants is then

Then the probability of having no x-intercept is

Note that the probability is independent of $n$.

Here's a different take on your question.

A parabola is the set of all points that are equidistant from a fixed point the nearest point on a line. Since a quadratic equation defines a parabola that opens up or down, its line is necessarily horizontal: y=s for some constant s.

Due to this definition, a parabola defined by a quadratic equation can be uniquely identified by three parameters: the (x, y)=(q, r) coordinates of the fixed point (the focus) and the y=s coordinate of the horizontal line.

The x coordinate of the focus (q) is unimportant for this question as it has no bearing on whether the parabola intersects the X-axis. So we're left with just r and s.

If r==s, then our parabola is in fact a straight line which cannot be described by a quadratic equation. So we can discount this possibility.

Not the answer you're looking for? Browse other questions tagged roots graphing-functions quadratics or ask your own question.

250
Conjectures that have been disproved with extremely large counterexamples?
34
Probability that a quadratic polynomial with random coefficients has real roots