Determine the missing number in a grid of numbers

I met this question yesterday while solving an I.Q test. It took me around 1 hour to come up with a solution that I'm not certain is the correct one. 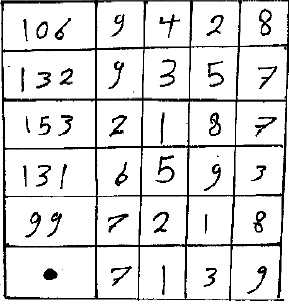 What is the number that you should put instead of the dot?

As you can see, every row is divided into 1 big number on the left, followed by four 1-digit numbers on the right.

For example, take the third row:

However, this works for all rows, except the first one at the top. That's the closest I could get to the solution. Should a person find the complete solution, I'll be extremely grateful.

NOTE: it is entirely possible that the person who wrote this puzzle is playing "mind-games" with us, and that he included the first row just to deceive us, thus making the question even harder. But let's not make any assumptions here.

It is also worth noting that the choices that came with the puzzle were as follows:

Maybe the idea of the question is to choose the most different choice. the sum of the digits of all of these choices is 11, except for 110:

Can you elaborate why the puzzle maker might want to deceive us by giving us a faulty first row?

I'll update this if a more comprehensive solution comes to mind.

3
Crossword puzzle- Crossnumber puzzle
4
Simple puzzle from The Moscow Puzzles with wrong solution?
7
Number of Solutions in this Number Puzzle
1
A cool number-theoretic puzzle in IMAT: find the last digit
12
How is moving the last digit of a number to the front and multiplying related to multiplicative orders?
0
Cross-number puzzle to make multiples of Seven
1
Person A and Person B communicate to figure out the numbers
0
Can a three digit number start with zero?
0
First level 4-digit numbers (Kaprekar connection)