I'm struggling to answer one of the problems in the book Notes on Geometry by Elmer Rees. The question is as follows:

Consider a disc $D^2$ made of a material such that the speed of light at a point $p$ is proportional to the Euclidean distance of $p$ from the boundary. Prove that the light rays are the hyperbolic lines of the Poincaré model.

After trying to solve this using purely mathematical ideas (the book is a classic mathematical geometry graduate text), I found the only way to proceed was by using a Snell's Law (a law of physics and so not in the book). This makes me nervous that I'm perhaps missing the point!

However this does allow me to relate $r$ (the general distance of $p$ from the centre of the disc O, $k$ (the distance of $p$ from O when the light is travelling parallel to the boundary) and the general angle $\theta$ between Op and the direction of motion. The relationship I have derived is: $$1-r = (1-k)\sin\theta$$ Which looks really promising since then $\theta=\pi/2$ when $r=k$ and $\theta=0$ or $\pi$ when $r=1$, as required for a circular path (i.e. hyperbolic lines of Poincaré model). However I still can't show the path of the light is actually circular.

So I have a few questions:

Many thanks in advance!

I think I have found the right solution: I thus deleted my previous answer to avoid any possible confusion.

To compute the light path, we can take advantage of Fermat's principle: among all paths, light chooses the one that takes the minimum amount of time. In polar coordinates $(r,\theta)$ the line elements is $ ds=\sqrt{dr^2+r^2d\theta^2}$ and the speed of light inside the unit disk is $v=\alpha(1-r)$, where $\alpha$ is some positive constant. If $k$ is the minimum distance of the light ray from the center, the path must be symmetric with respect to the point nearest to the center and the time light takes to travel from that point to the boundary of the disc is: $$ T=\int_{path}{ds\over v}=\int_k^1{\sqrt{1+r^2\dot\theta^2}\over\alpha(1-r)}dr, $$ where I set $\dot\theta=d\theta/dr$. Unfortunately, this integral diverges: this might be a signal that the model proposed in that book is not realistic, or that there was some misprint.

What matters, however, is that this result is not "a hyperbolic line of the Poincaré model", i.e. a circle perpendicular to the boundary of the unit disk. For a point on such a circle on can easily derive that its polar coordinates obey: $$ \theta_{circ}=\arccos\left({k\over r}\cdot{1+r^2\over1+k^2}\right), $$ which gives: $$ \dot\theta_{circ}={k\over r}{1-r^2\over\sqrt{(r^2-k^2)(1-k^2r^2)}}. $$ This is different from equation $(*)$ found above and one can check that the integrand appearing in the expression for $T$ is indeed smaller using $(*)$ than using the expression above.

One can see below some plots of the light paths given by solution $(**)$, for different values of $k$. 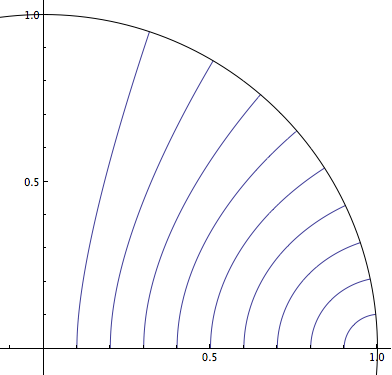 As noted by David K in a comment below, taking $v=\alpha(1-r^2)$ and repeating the same steps as above, from the Euler-Lagrange equation one gets an expression for $\dot\theta(r)$ which is the same as that for $\dot\theta_{circ}$ above. In that case, then, one actually finds as solution an arc of a circle, perpendicular to the boundary of the unit disk. This is then probably the form which was intended in the book.

Snell's law as it is initially taught in high school physics applies to a ray of light passing through a single boundary between two uniform transmission media. There are only two speeds of light in this scenario, one on each side of the boundary.

If you have multiple transmission media layered so that the boundaries between media are a set of parallel planes, then you can easily extend Snell's law (by induction on the number of boundaries, if you like) to show that the sine of the incidence or refraction angle on one side of any boundary is proportional to the speed of light on that side of that boundary.

To apply the idea of the previous paragraph in two dimensions, you need parallel straight lines instead of parallel planes.

But that is not what you have. If the speed of light is $v_1$ at some point $p_1$ on the disk, the set of all points where the speed is $v_1$ forms a circle. Multiple speeds gives you a set of concentric circles.

The interaction of light with an infinite number of concentric circles is hard to visualize, so let's discretize the system for the time being by dividing the disk into concentric annular rings, each one having the same small width $\Delta r$. The figure below shows the two circular boundaries that separate three of those rings. 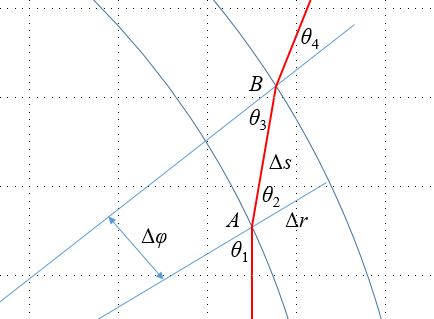 This actually shows just a small arc of each circle so that we can enlarge the figure enough to fit some labels between the two boundaries.

The curvature of a differentiable curve is the rate at which the direction changes relative to the rate at which we travel along the curve. Note that "direction" is not the angle the curve makes as it crosses a radial line of some system of polar coordinates; the change in direction should be independent of any particular system of coordinates, but you can measure it by observing the change in angle between the tangent line and a fixed line (e.g. the $x$ axis of some coordinate system).

The path in the figure is not differentiable so we cannot speak of its curvature, but it has a corresponding property: starting at $A$ the path goes in one direction toward $B$; it travels a distance $\Delta s,$ and then it changes direction by the amount $\theta_4 - \theta_3$ (a negative number, indicating a rightward turn). If we reduce $\Delta r$ so that we have more rings, as $\Delta r$ goes to zero we should approach the shape of the path of the light across the disk when the speed varies continuously, and $(\Delta s)/\lvert \theta_4 - \theta_3\rvert$ should approach the radius of curvature at each point along the curve. The goal would be to show that on a single path, that limit is constant over the entire path.

I don't have a solution yet, but I think what I wrote at least gives some hope that the exercise you were given is correct. If instead we assumed (incorrectly) that $$ \frac{\sin\theta_4}{\sin\theta_2} = \frac{1 - r - \Delta r}{1 - r} $$ (notice how this compares an angle at $A$ with an angle at $B$), we would get results like the ones already found in another answer, which are not lines of the hyperbolic geometry of a Poincaré disk, thereby disproving the thing you were asked to prove.

Some additional, possibly random thoughts (since I still do not have a complete answer):

There is quite a lot written about the Poincaré disk on this site:
https://math.stackexchange.com/search?tab=relevance&q=poincare%20disk

I think you have assumed your disk $D^2$ is a unit disk. If we take a point $P$ inside the unit disk and invert it through the unit circle, we get a point $P'$ on the same radial ray such that $\lvert OP\rvert\lvert OP'\rvert = 1.$ Then every circle through $P$ and $P'$ is a line of the Poincaré model. This set of circles is the elliptic pencil of a set of Apollonian circles, the unit circle belongs to the hyperbolic pencil of the same set of Apollonian circles.

Elsewhere in the various questions on the Poincaré disk I see that a circle around $P$ in the Poincaré model (a set of points all at an equal distance from $P$) is also a circle in the Euclidean metric, but with a center other than $P.$ Assuming your exercise is correctly put, I believe the the set of circles around $P$ (according to the Poincaré model) should be part of the hyperbolic pencil of the set of Apollonian circles described above, and they should correspond to the wave fronts of a disturbance that starts at $P$ and propagates at the speed of light (as defined in your exercise) in all directions.

The speed of light defined by your exercise induces a distance metric defined by the time it takes light to travel from one point to another.

Update: It occurs to me that the Poincaré model of the unit disk implies that we can measure distances between points by integrating a distance metric along paths between the points. By several hand-wavy leaps I come to the idea that the metric is chosen so that its geodesics are the hyperbolic lines of the Poincaré model, and that if the speed of light is defined so that it is constant with respect to that metric, it will follow those geodesic paths. If the speed of light is not constant with respect to that metric then in some cases it will be refracted and will depart from a hyperbolic line. By a further leap (based on reading Distance in the Poincare Disk model of hyperbolic geometry and these course notes) I come to the idea that the metric should be proportional to $\frac1{1-r^2}$ where $r$ is the distance from the center, and therefore the speed of light should be proportional to $1-r^2$ if we want light to follow the hyperbolic lines.

Since the exercise says the speed of light is proportional to $1 - r$ rather than $1-r^2,$ it seems credible that the light will not follow hyperbolic lines in all cases. If the path of the light stays near the edge of the disk, however, its speed will be almost proportional to $1 - r^2$ (since the relative error of the missing factor $1 + r$ is small), producing a path that almost follows a hyperbolic line. So if we plot several paths as in Aretino's answer, the ones near the edge of the disk should be almost circular (which they appear to be).

Taking this together with the calculations in Aretino's answer, I'm inclined to agree that the exercise is incorrect.

Not the answer you're looking for? Browse other questions tagged geometry hyperbolic-geometry or ask your own question.

10
Distance in the Poincare Disk model of hyperbolic geometry