This problem is said to be an application of Newton's line, which I found to be reluctant. Perhaps there might more points to be set up that I didn't know.

As the answer by Oldboy suggests, there's a condition that needs to satisfied for the problem to be correct but I haven't found it out yet. I hope someone can help me.

Something is deeply flawed here. I tried to draw the picture again in Geogebra and by following the same instructions I got this: 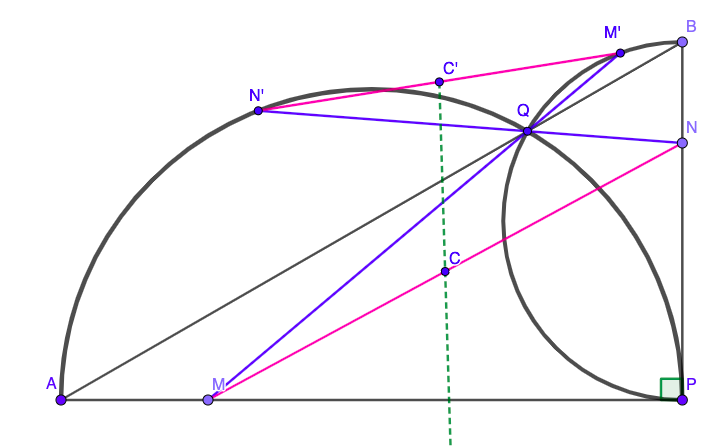 Points $C,C',P$ are clearly not collinear. Of course, you can get this condition satisfied for some special positions of points $M$ and $N$ but the OP did not mention any additional restriction: 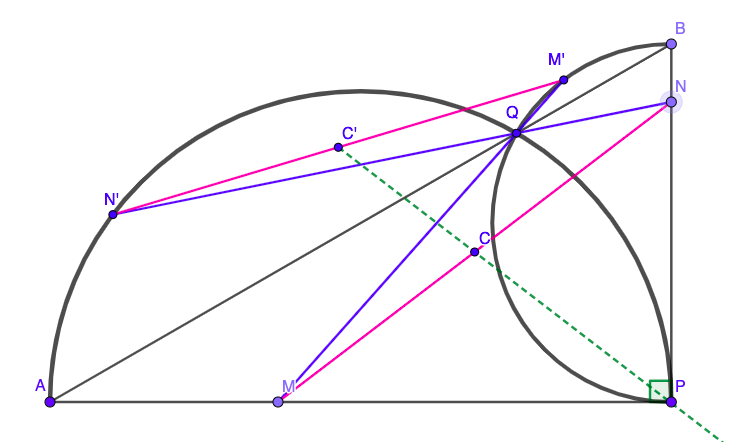 Are we sure that the text of the problem is correct? Something is missing here, I think.

This is the only way I found after struggling for three days. I will post a simpler and purely geometric answer when I found it.

First, we need to prove some theorems before solving this problem.

2, Locus of an arbitrary point $D$ on the circle $c$ (such that arc $RD$ is making an arbitrary angle $2θ$ at the center $S$ of the circle) is an straight line passing through point $Q$.

1, Any point that makes a right angle with diameter of the circle will be incident on the circle. $PQ$ was perpendicular to line $l$, and $R$ lies on line $l$. Hence, $Q$ will be on circle regardless of the position of $R$.

Check this geogebra link for an interactive model

Lemma A1: Ratios of the lengths $PD$ and $PR$ will remain constant as long as θ remains constant.

This ratio will remain constant as long as $θ$ remains constant.

Finally to the problem. Now, we can see that the two (semi)circles in the problem belong to the family of circles that are formed by rotating the diameter around point $P$ with other end resting on the line $AB$.

The diameters of two circles $AP$ and $BP$ with centers $D$ and $E$ are perpendicular.

Writing the equation of line passing through points $A$ and $B$ in polar form.

The length of the corresponding diameter is,

As $\alpha = \beta$ from Theorem B, Right Hand Side of both equations are equal.

7
Intersection point of line segments
12
6 point lying on a common circle
3
Probability of intersection of line segments
6
Collinearity problem (Newton-Gauss line)
0
Two circles intersect at points A and B. Point X lies on line AB. Prove that the lengths of the tangents drawn from point X to the circles are equal.
9
A generalization of the Euler Line
0
Prove that $D$ is the incentre of the triangle $IJK$.
2
Prove that every point, satisfying given condition, lies on some line.