I was following a tutorial here; the matrix in echelon form is as follows: 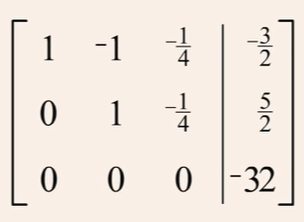 While further down the video there was another example here and the reduced echelon form of the matrix he was solving was this: 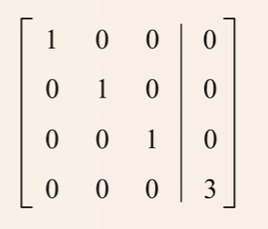 However, the reason why the youtube guy did this, if you continue watching on, is because he wanted to get the matrices to row reduced echelon form. In other words, he divided by $-32$ so that he might simplify the matrix further. The second matrix, you'll note, is already $0$'ed and $1$'ed for all other rows bar $R_4$, and we can see that $R_4$ is inconsistent, so there's really no need to do anything to it.

tl;dr: Simplifying the inconsistent row in the first matrix helped us gain more info about the matrix, while doing that in the second matrix would not have.

Not the answer you're looking for? Browse other questions tagged linear-algebra matrices gaussian-elimination or ask your own question.