What is the difference between an "empty interior" and a "hole" in topology?

I am studying an Amazonian language, Palikur, whose speakers think of objects in terms of their outside and inside. The language describes these two attributes according to their openness or compactedness, i.e. being open, or partially open, or closed. Palikur grammar classifies all inanimate entities according to their interior, boundary, and extendedness.

The language uses suffixes on numbers, verbs, adjectives, and prepositions to indicate the topology of the noun they refer to. One of the most common Palikur suffixes is -iku (if focus is on holes or the hollow interior of an item), for example:

One-iku well (or corral or room or ring)

Water is in-iku the well. "

Unfortunately, I am a linguist, not a topologist, so I really need help!

Meanwhile, "hole" isn't a precise term - depending on the context, by "hole" one might mean (in my experience) a non-contractible loop, or a (representative of a) nontrivial element of (co)homology, or - in a metric space - a witness to non-completeness.

As to the linguistic element, topology is a very unintuitive subject - the various terms often have origins in "tame" intuitions, but very quickly those same intuitions become unhelpful. So I wouldn't look to topology for an interpretation of natural language constructs without a good reason.

Here's a start on describing the two ideas in lay (nonmathematical) terms in English. From your brief description I don't see an easy way to map them to Palikur.

In (algebraic) topology a hole is a feature that can be surrounded by a curve that can't be shrunk to a point. For example, think of a torus: the surface of an inner tube. That surface has two different kinds of holes. You can see them in this picture (from wikipedia) where neither circle can be collapsed while remaining on the surface: 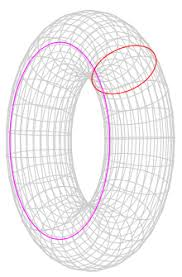 The surface of a sphere has no holes: every circle can be shrunk to a point.

In (point set) topology you can talk about the interior of a set $S$, but not about holes. For example, in the plane the interior of $S$ consists of those points in $S$ for which every nearby point is still in $S$. So the interior of a disk is the part of the disk that isn't on the circular boundary.

Interior has nothing to do with boundedness or size. If $S$ is all the points outside a disk then every point of $S$ is in the interior of $S$ since points near a point that's outside the disk are also outside the disk.

Let me try to give a rather intuitive answer by only considering the real plane $\mathbb{R}^2$, i.e. the $2$-dimensional coordinate system which is covered in school mathematics. A topology is a collection of subsets of some set (here the real plane $\mathbb{R}^2$) such that certain axioms hold. Elements of a topology are called open sets. For the real plane $\mathbb{R}^2$ (equipped with the standard topology), the open sets are exactly given by unions of open disks around some points (that also includes not taking any open disk at all which yields the empty set). An open disk (of radius $r$ around some point $x$ is the set of all points whose distance from $x$ is strictly less than $r$. The "strictly" part is what makes such a disk open. Consider for example: 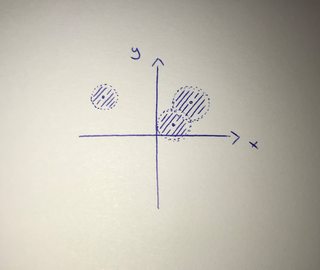 The union of the three drawn disks is the set of all points that contained in at least one of the three disks (given by the hatched lines).

Not every subset is open. That gives rise to the question whether one can sort of make them open or consider an open part. The latter is the interior. The interior $A^{\mathrm{o}}$ of some set $A$ is the biggest open subset of the space (here still $\mathbb{R}^2$) that is contained in $A$. Therefore one could call the interior the open part. If you take a closed disk (a disk with its boundary), then the interior is exactly given by the open disk (so we just removed the boundary in this case).

What can we say about empty interior now?

If a set has an empty interior it cannot contain some open disk. That means we cannot have a small piece of a surface or anything, since we could find some open disk inside then (maybe very small open disk). Therefore subsets of $\mathbb{R}^2$ with empty interior are basically clouds of points. Everything we did here did not depend on the dimension to be honest. You can also do the same for the $3$-dimensional real space etc. There you need to consider open $3$-dimensional disks (open balls) instead.

Let us talk about holes now. A hole is basically something that can be surrounded by a closed curve which cannot be shrunk to a point by deforming it. Its is not easy or clear how to define "holes" to be honest. I am basically talking about $1$-dimensional holes here. You can think of a western movie and some cowboys with their lasso ropes that caught onto a stick to get a grasp on such a hole. For example: 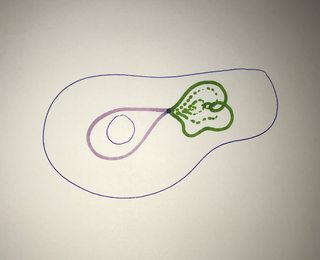 The purple curve behaves like a lasso, while the green one can be shrunk to the point where both started.

Now both of these notions are very different and not really comparable, but I still hope that my answer helps you.

Not the answer you're looking for? Browse other questions tagged terminology or ask your own question.