I need a mathematical algorithm for finding the angle, formed by three points, which is open toward a fourth point.

For example, in Fig1 below I desire angle $\theta$ because it is "facing" point $P$. However, the formula for the angle between two vectors, $$\theta=\cos^{-1}\Big(\frac{\vec{u}\cdot\vec{v}}{uv}\Big)$$ gives angle $\alpha$ because the above relation always returns the angle which is less than 180 degrees. 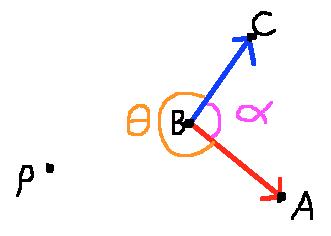 In contrast, in Fig2 I desire angle $\alpha$ because this time it is "facing" point $P$. 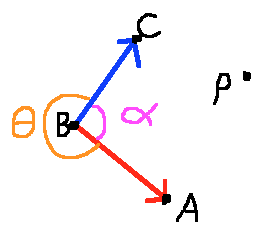 As a final example, in Fig3 below I need angle $\theta$, because it is still technically "facing" point $P$. 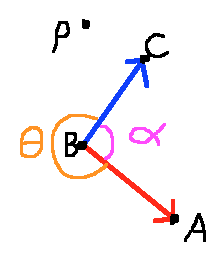 This problem can occur in any orientation, making it difficult to say, for example, "If point $P$ is to the left of points $A, B, C$, use the leftmost angle, otherwise use the right" or something like that.

Any help would be appreciated!

If anyone's interested, my current solution is to split the angle facing the point $P$ in half and add those two together. 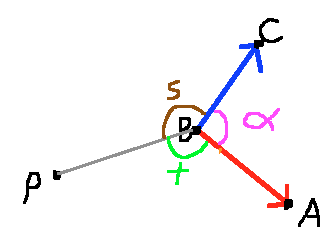 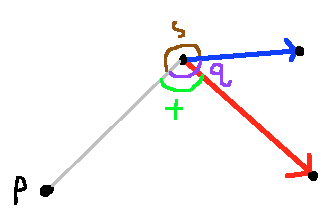 You can sort this out by comparing the signs of three determinants. Let $$d_0 = \det\begin{bmatrix}B_x&B_y&1\\A_x&A_y&1\\C_x&C_y&1\end{bmatrix}.$$ This tells you the direction in which the vertices of $\triangle{BAC}$ are traversed: positive means counterclockwise, negative clockwise, and the points are colinear if it’s zero. Note that the area of this triangle is equal to $\frac12\lvert d_0\rvert = \frac12\lVert A-B\rVert\,\lVert C-B\rVert\,\lvert\sin\phi\rvert$, with $\lvert\phi\rvert\in[0,\pi)$, so when the points aren’t colinear this is another way to find the angle between them. Moreover, unlike the dot product, this determinant can tell left from right. On the other hand, it can’t tell the order of the points when they’re colinear, which the dot product can.

If you expand these determinants, you might find that the resulting expressions look familiar. For example, $d_0 = (A-B)\wedge(C-B)$, where $\mathbf v\wedge\mathbf w=v_x w_y-v_y w_x$ is the “two-dimensional cross product” of the vectors.

Not the answer you're looking for? Browse other questions tagged trigonometry vectors angle or ask your own question.