It is well known (as shown here) that the minimum number of starting clues a Sudoku puzzle may have to generate a unique solution is 17.

My main question is

Given a completed Sudoku grid, is it always possible to find a subset of 17 starting clues which generate the grid uniquely?

I suspect the answer might be 'no' as, accounting for symmetries, there are 3,359,232 distinct Sudoku grids and I think there are only around 50,000 known 17-clue Sudoku puzzles. This leads me to a follow-up question.

If the answer is not known, do we have an upper bound for $M$?

What do I know so far?

We can demonstrate, by hand, that $M \leq 60$.
Take any completed Sudoku grid and remove the following entries (marked by an X): 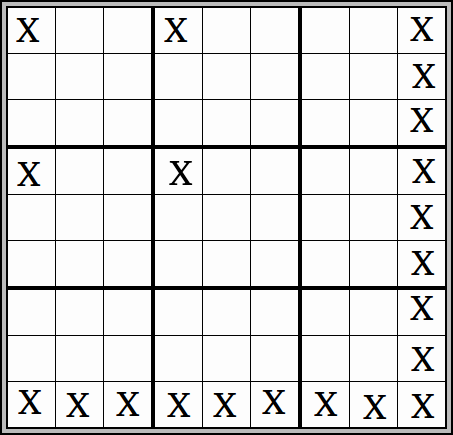 The solution to this Sudoku is fully determined and some subset of the remaining clues will constitute a minimal set of starting clues.

According to the mathematics of Sudoku, "The most clues for a minimal Sudoku is believed to be 40, of which only two are known." One way of generating Sudoku puzzles would be to start with a completed grid and remove entries using some algorithmic procedure until a minimal set of clues was reached. So much analysis has been done on this that, in my opinion, if somebody encountered a grid where they could not generate a set of starting clues with less than 40 entries, this would be of considerable note.

I suspect that $M$ is around $20$ and it's conceivable to me that somebody may have indirectly encountered a much better upper bound for $M$ while trying to generate puzzles from completed grids.

Browse other questions tagged combinatorics sudoku or ask your own question.

15
Maximum number of clues in a Sudoku game that does not produce a unique solution
4
Sudoku: What is the relationship between minimum number of clues and order n?
11
Minimum Size of Word Search Containing All Strings of Length $l$
3
A game concerning Sudoku
1
Number of weak-sudoku tables
0
Maximum Sudoku pencil marks needed