I have tried using Euler Angles to determine the device orientation but encountered the gimbal lock effect, that made calculation explode when the device was pointing up. That lead me to use Quaternion, that does not suffer from the gimbal effect.

I've found a library that converts $\alpha, \beta$ and $\gamma$ to a Quaternion, so for the following values:

I get this Quaternion ($ZXY$ order): 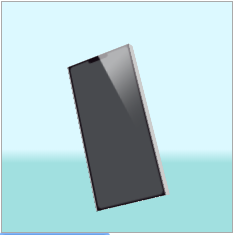 I would like to write a method that gets a Quaternion as an input and outputs if the device is on portrait or landscape mode.

Defining portrait and landscape as a range of $\pm 45^\circ$ around the relevant axes.

What approach should I take?

Update: To elaborate further, my goals are:
To write a method that gets $\alpha, \beta$ and $\gamma$ and outputs if the device is in one of the following orientations:

Not a complete solution, but this should provide a method with some tweaks.

Some details are left out in the article, so I cannot say exactly what rotation method is being used. I'll make an example where the rotation order is the extrinsic $xyz$-order.

Therefore, this kind of multiplication can be used to represent a rotation about an axis. Now we can use the previous results to actually compute a sequence of rotations. As mentioned in the beginning, the extrinsic $xyz$-rotation will be calculated.

It is fairly easy to see that the quaternion returned by this process is always unitary length. Next, we are interested in reversing this process, or extracting the Euler angles from this result. Without going throught a proof, the solution is

So, the identity rotation gives the portrait orientation of the phone in the global coord. system.

Note that a single rotation of $\pi/2$ around the $Z$ axis give us the landscape orientation. If we decompose the phone orientation in two rotations, one about $Z$ axis and other about one of the other axis, I think that looking at the $Z$ axis rotation angle we could discover the phone's orientation.

Now, departing from the conjugate of $Q$:

Multiplying both sides by $E_2 Q$:

An analogous calculation can be done for factorizing $Q$ in two rotations around $E_1$ and $E_3$.

My guess is that having a measure of $b$ close enough to $\pm \pi/2$ then the phone is in landscape orientation.

Not the answer you're looking for? Browse other questions tagged quaternions orientation or ask your own question.

1
Quaternion Decomposition
8
Getting Euler (Tait-Bryan) Angles from Quaternion representation
5
Quaternion - Angle computation using accelerometer and gyroscope
0
How do you calculate the vertical angle from a 3d rotation matrix or a quaternion?
0
How do I convert Euler Orientations to 2D rotation.
1
Getting the rotation angle along a single local axis from a quaternion