$6$ bishops and a knight on an infinite chessboard

The goal of $A$ is to checkmate $B$, that is, to attack knight of $B$ with bishop in such a way that the knight of $B$ cannot move anymore because all the squares at which he can move are under attack by the bishops.

$B$ wins if he has a winning strategy, that is, if he moves in such a way that $A$ will never checkmate him and, of course, $B$ always plays the best possible strategy.

We tried in a chat-room to prove that $6$ bishops are always enough for $A$ to win, but, we still do not have a proof.

Is $6$ the minimum number of bishops needed to secure $A$ a winning strategy?

You can also join us in chat-room.

There are two versions:

1) A knight is allowed to capture bishops.

2) A knight is not allowed to capture bishops.

I would like to see the solution of at least one version.

The strategy I will describe builds upon the answer here. The knight will be allowed to capture bishops, but we will make sure that he will never have the opportunity.

Note that the walls will be of different "parity", one consists of two black-square bishops and one white-square and the other with the colours switched.

The wall here cannot move on its own without creating gaps. To still ensure that the knight can never jump the wall, we will make use of the fact that the knight can only ever jump on a square of the dual colour of his current square. We describe the sequence for the wall of two white-square and one black-square bishop(s). In all the following pictures, white is to move. It is important that the knight is on a black square. The green arrows will represent the wall. 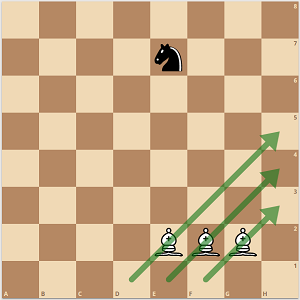 The exact position of the knight is only an example here. White first moves the middle bishop. EDIT: Moving the middle bishop might runs into problems. As ArsenBerk pointed out, one should move the bishop that is furthest back first (and only then the middle one. This is only problematic as long as the knight is on a black square in the diagonal directly infront of the wall. In that case, move the other wall. 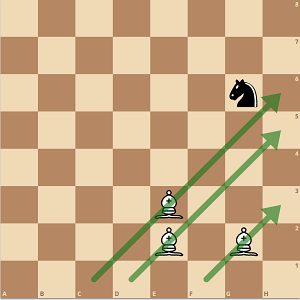 Right now, there is a gap in the wall, but as the knight was on a black sqaure, he could not take advantage of this. Next white moves the back bishop to build the new face of the wall. 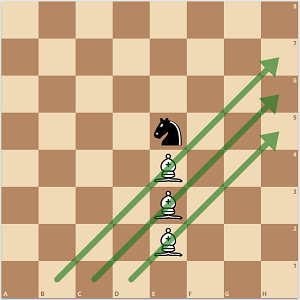 If the knight ever comes close to a group of bishops, we just move them far away along the wall without moving the wall. 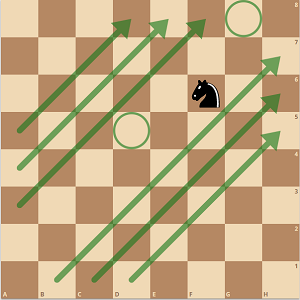 The bishops are some distance away here and not in the picture. The highlighted squares are the remaining squares of the knight. He can only move up or down the corridor. With 7 bishops, $A$ would be able to made the knight by closing up the wall. With only 6, the bishops will have to get a little cosy with the knight now. We can assume that white is to play here.

We will drag one bishop down the wall to challenge the knight. 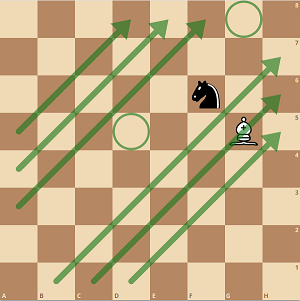 For the sake of illustration, we assume he moves down. (The board is shifted to the up and right now). 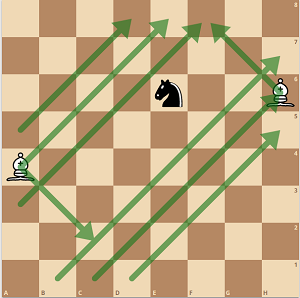 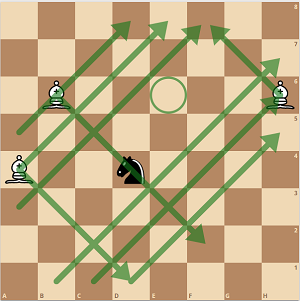 We immediately challenge the knight, leaving only one square open. 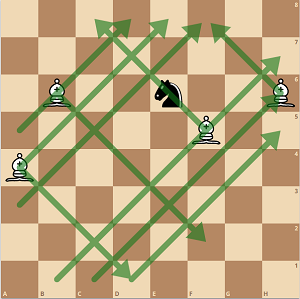 This is the final mating position. Observe that no bishop is ever under attack in this sequence and that (execept for the initial up or down choice) all moves are forced for black.

17
A simple game on infinite chessboard