A simple game on infinite chessboard

If $A$ succeeds in finding a trap for $B$ (check-mates him) the game is over and $A$ wins. If $B$ can avoid being check-mated indefinitely then $B$ wins .

Does $B$ always has a winning strategy?

There are two versions of this game:

1) Knight is not allowed to capture figures of $A$.

2) Knight is allowed to capture figures of $A$.

I would very like to see the solution of at least one of those two versions.

For the purposes of this question, suppose whatever version you want.

This is one of my problems, I like to create problems, especially simple ones.

Peter mentioned a very good question in a chat, namely the issue of a draw, so

*) If a knight is not under attack at some field but cannot move anywhere because all the fields where he can move are under attack then that is a draw.

So, $A$ wins if he/she checkmates knight, that is, if she/he attacks knight and knight does not have a field to move on because all are under attack, including the one at which he is at.

Notify me if we can improve this question.

And, if knight is not allowed to capture figures of $A$, then I think that two queens and three bishops always have a winning strategy.

"Does $B$ always has a winning strategy"?

No, infact player $A$ will always win with the right strategy. With the help of user Andreas Lietz, I have found a minimum bound of the number of bishops ($7$ bishops) with which player $A$ always wins regardless of whether the knight is allowed to capture $A$'s bishops. The basic idea of this strategy is to form too walls from which the knight cannot pass, and move one of the the walls closer to the other eventually check-mating the knight.

$(1)$ Player $A$ should choose exactly $7$ bishops and spread them far apart so that the knight cannot trap capture any of them when placed by player $B$. Also make sure $4$ of them are on white squares and $3$ of them on black or vice-versa. 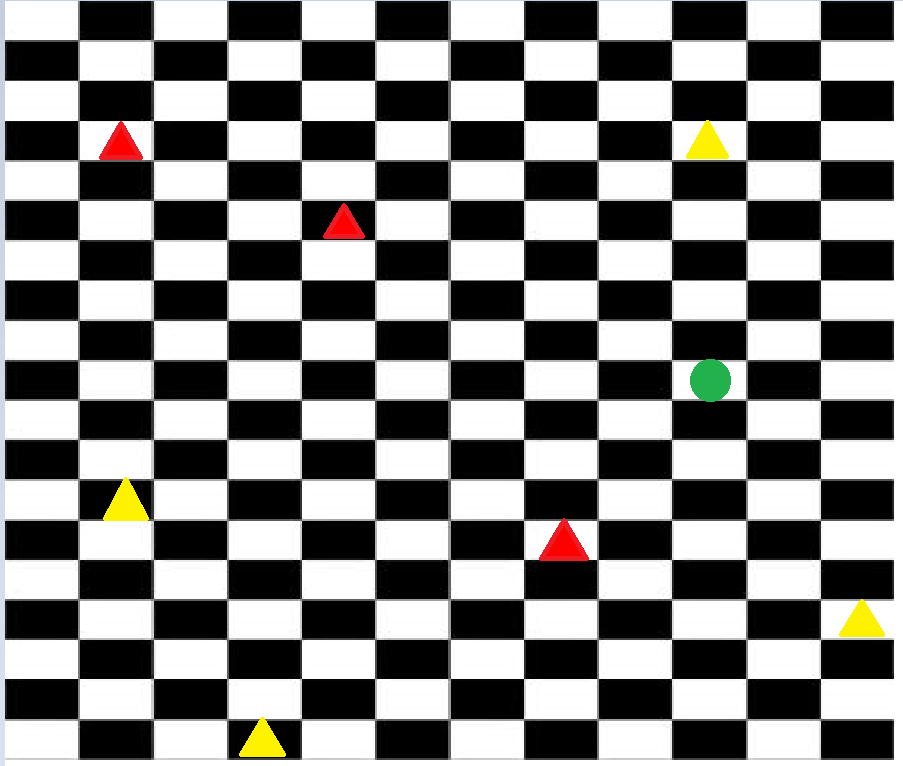 $(2)$ Choose a location far from the knight and form a wall of $3$ bishops in a row (represented by the red triangles). This wall (blue line) cannot be crossed by the knight as it cannot move more than $2$ steps vertically or horizontally. 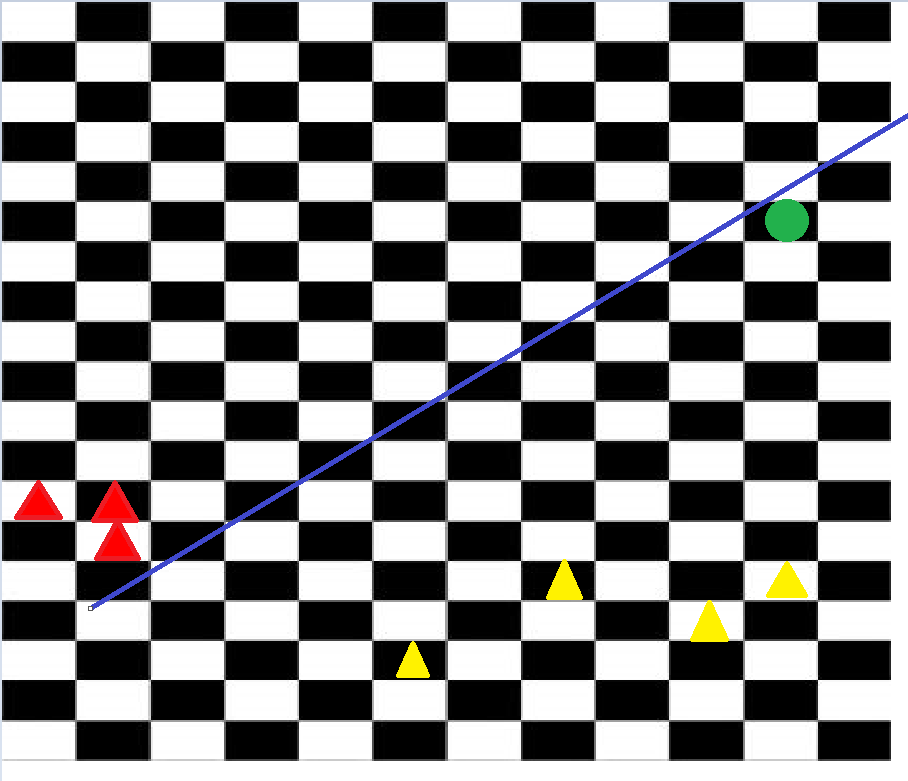 $(3)$ Move the remaining two black and two white bishops (represented by yellow triangles) to another location far from the knight and form an alternating black and white wall of bishops. The knight is now traped in the pink area as shown in the 3rd picture.

$(4)$ To form the wall, only 3 bishops are enough, so one can move the farthest bishop to the front to close the gap between the two walls.

$(5)$ Keep repeating step $(4)$ until the gap closes and the knight is captured. If the knight ever comes close to a bishop, they can travel along the diagonal of the wall a long distance without changing the wall. 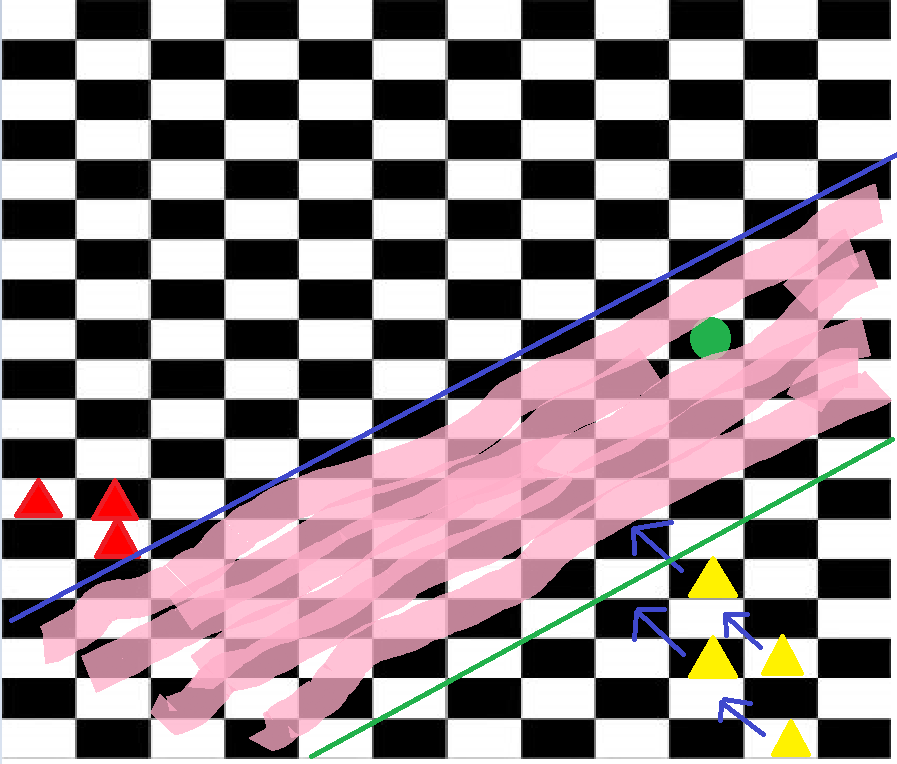 User ArsenBerk has also pointed out that player $A$ can always avoid a draw by limiting the knight to $2$ diagonals using two walls of three bishops each and using the last bishop to attack the diagonal the knight is on. Finally, a bishop from one of the walls can check-mate the king. 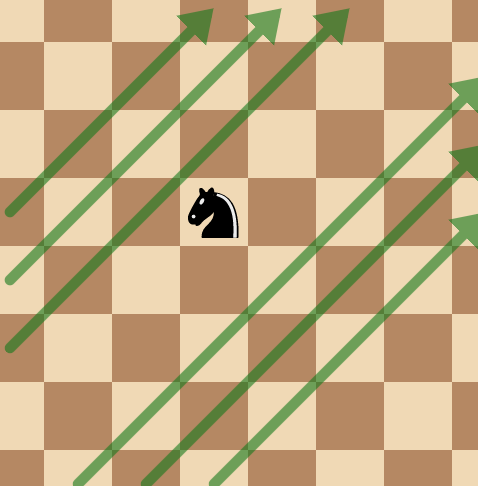 "If knight is not allowed to capture figures of A, then I think that two queens and three bishops always have a winning strategy."

I don't see how this would work out.

Not the answer you're looking for? Browse other questions tagged combinatorics game-theory chessboard infinite-games or ask your own question.

1
Rook Game Problem Solving
2
Can Zermelo's theorem be extended to a game which always has a winner?
2
Gale-Stewart game
7
$6$ bishops and a knight on an infinite chessboard
11
Can two queens win against a knight on an infinite chess-board?
4
Winning strategy of game with positive divisors of the number $10^{2n}$
1
Winning strategy for player $0$ in the game $G_3(\mathfrak{A_1},\mathfrak{A_2})$ $\mathfrak{A_i}=(\mathbb{N},\{(n,n+i),n\in \mathbb{N}\})$
0
Game theory question about a variant of Nim