Can you embed a non-trivial knot on the surface of $\mathbb{R}P^2$? I know we can on a torus, and we can't on a 2-sphere. My hand-wavy argument/intuition based on the little I know from self study of Hatcher's book is that there can't be, since the fundamental group of $\mathbb{R}P^2$ is $\mathbb{Z}_2$, although I don't know how to build on that, if it's even the right argument.

Another way I tried to view this was to use the fact that if you remove a disc from $\mathbb{R}P^2$, you get a Möbius strip. This leads to a few other questions.

Can you embed a non-trivial knot on a Möbius strip with a single half-twist? I think you can't, based on failing to be able to draw one. But with three-half twists, the boundary is a trefoil so this immediately gives a non-trivial knot, and so on for larger odd numbered half-twists.

And so the other question is, when you remove the disc from $\mathbb{R}P^2$, how many half-twists does the Möbius strip have (if that even makes sense to ask without embedding the strip into $\mathbb{R}^3$)?

My motivation for this particular question is that if this makes sense and you can have multiple twists, this might allow a knot to be on $\mathbb{R}P^2$ when we glue back the disc. If it always has just one twist, and that Möbius strip does not have a knot, then gluing the disc won't create a knot and so $\mathbb{R}P^2$ won't be able to have any knots on it.

Now my final question, which is more vague and for which I haven't made an attempt, if it is possible to have knots, what happens to them when $\mathbb{R}P^2$ is immersed in $\mathbb{R}^3$? Are they preserved, or can they be broken due to the need for $\mathbb{R}P^2$ to self intersect in any such immersion? How can I attempt to solve this/what tools are best to study this?

Here are the definitions I'm using:

(Since we are working in dimension at most $3$, I'm not being careful about technicalities of smooth/piecewise-linear embeddings.)

For a surface $\Sigma$, then each oriented knot $K$ in $\Sigma$ gives a conjugacy class of $\pi_1(\Sigma)$. This is because the choice of basepoint matters, but it only changes the element of $\pi_1(\Sigma)$ by conjugation. There is a theorem that if two knots are freely homotopic (that is, if they correspond to the same conjugacy class in $\pi_1(\Sigma)$), then they are equivalent. See Proposition 1.10 of "A primer on mapping class groups." 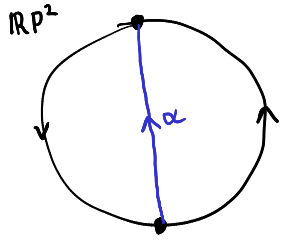 Using covering spaces, since $\mathbb{R}\mathrm{P}^2$ is double covered by $S^2$, and since this $\alpha$ is the image of a path between antipodal points of $S^2$, it must be a generator.

Because $\alpha$ is a simple closed curve, it is a knot, and since it is not nullhomotopic, it is not equivalent to a trivial knot.

Removing a disk from $\mathbb{R}\mathrm{P}^2$ gives a Möbius strip, which has a fundamental group of $\mathbb{Z}$. The $\alpha$ loop corresponds to the core circle in the strip, which is a nontrivial knot. The only other nontrivial knot is from manipulating $\alpha\cdot\alpha$ a bit; this is two parallel curves in the strip, but they join up to form a single loop, or, more simply stated it is the boundary of the Möbius strip.

There is no way to intrinsically count the number of twists in a Möbius strip, and the best you can say is "an odd number." However, if you actually embed the Möbius strip in $\mathbb{R}^3$, then you can count the number of twists, but it is more complicated than you might initially think. Given an embedding, consider the core circle of the Möbius strip, which is a knot in $\mathbb{R}^3$. Every knot has a canonical framing, which is a continuous choice of normal vectors at each point of the knot. The canonical framing (also known as the $0$-framing) has the property that if you take the knot $K$ and take a copy $K'$ that is from moving $K$ in the direction of each of its normal vectors (called a push-off), then the linking number between $K$ and $K'$ is $0$. With this framing, you can count how many times the Möbius strip twists as you go around $K$.

If the core circle of the Möbius strip is a trivial knot, then this definition matches the intuitive notion of the number of twists.

You bring up how if you take an unknotted embedding of a Möbius strip with three twists, then its boundary is a trefoil knot, which is nontrivial. This is a specific example of a more general construction called a satellite operation that is known as a cable, where you take a knot and place along it a Möbius strip with some number of twists. If you start with the unknot, then the cables are all nontrivial knots unless the Möbius strip is given $\pm 1$ twists; collectively they are all known as $(2,t)$ torus knots (not to be confused with knots in a torus like at the beginning!), where $t$ is the odd number of twists. If you start with any nontrivial knot, then every cabling of it will also be a nontrivial knot.

I don't really know about what happens to knots from immersed surfaces. You ought to take some care because knot equivalence in the surface might lead to the knot passing through itself from the point of view of $\mathbb{R}^3$. All I do know is that Boy's surface, which is an immersion of $\mathbb{R}\mathrm{P}^2$ in $\mathbb{R}^3$, gives an embedded trefoil coming from the $\alpha\cdot\alpha$ knot in the Möbius strip: https://commons.wikimedia.org/wiki/Boy%27s_surface

I wonder if there's anything to be said about taking a knot $K$ in a surface $\Sigma$ that is immersed in $\mathbb{R}^3$, then looking at the set of all knot types in $\mathbb{R}^3$ that come from knots equivalent to $K$ in $\Sigma$? The interesting part here is that the singularities are places where you can pass the knot through itself. Is there an immersion of $\mathbb{R}\mathrm{P}^3$ where its nontrivial knot is always nontrivial in $\mathbb{R}^3$?

Not the answer you're looking for? Browse other questions tagged algebraic-topology knot-theory mobius-band or ask your own question.

8
Topologically distinguishing Mobius Strips based on the number of half-twists
0
Can a torus be cut into a Möbius strip with zero number of half twists?
6
Knots from the boundary of Möbius strips
2
How to define the "full-twist" Möbius strip
0
k-equivalence of knots
5
Cutting a multiple twisted Möbius strip in half
4
Is there a formal name for this type of knot?
3
Why aren't the "higher twist" Möbius bands distinct line-bundles over $S^1$?
1
Möbius strips with 3 twists to make a Klein bottle