Why does multiplication by purely imaginary numbers, regardless of magnitude, not cause purely rotation?

For context, I have been relearning a lot of math through the lovely website Brilliant.org. One of their sections covers complex numbers and tries to intuitively introduce Euler's Formula and complex exponentiation by pulling features from polar coordinates, trigonometry, real number exponentiation, and vector space transformations.

While I am now decently familiar with how complex exponentiation behaves (i.e. inducing rotation), I am slightly confused by the following.

$ 2^3 z$ can be viewed as stretching the complex number $z$ by $2^3$. This could be rewritten as $8z$. Therefore, Brilliant.org suggests that exponentiation of real numbers can be thought of as stretching a vector just like real number multiplication would. (check - understood)

Brilliant.org then demonstrates that multiplying $z_1$ by another complex number $z_2$ is equivalent to first stretching $z_1$ by the magnitude of $z_2$ and then rotating $z_1$ by the angle that $z_2$ creates with the real axis counterclockwise. (check - understood)

However, this is where I get confused. Why does, for example, $2^{2i}* z$ cause purely rotation of z but $2i*z$ does not (i.e. it causes stretching, too, in addition to rotation)?

To me, the fact that $2^{(2i+3)}$ causes both rotation and stretching makes perfect sense because we can rewrite this as $(2^3)*(2^{(2i)})$. As previously noted by Brilliant.org, exponentiation by real numbers can thought of as stretching.

Here is the crux of my issue:

I understand that the magnitude of the imaginary number in the exponent (for example, the $'2'$ in $e^{2i}$ ) can be thought of as a rate of speed...but why does this interpretation 'drop' when we are doing something like $2i * z$. i.e. Why is the $2$ in $2i*z$ not also treated like a rate of rotation but instead treated like a magnitude of stretching ?

My math skill is not particularly high level so if anyone can offer as much of an intuitive answer as possible, it would be greatly appreciated!

Edit 1: I guess another way of expressing this question is as follows:

Edit 2: While I accept that Euler's formula is a way of proving that exponentiation of purely imaginary numbers has a magnitude of 1 and therefore does not invoke stretching, that is not the sort of answer I am looking for. My question is aimed at identifying what was specified in Edit 1.

Edit 3: Here is a picture that helps clarify my point of confusion. 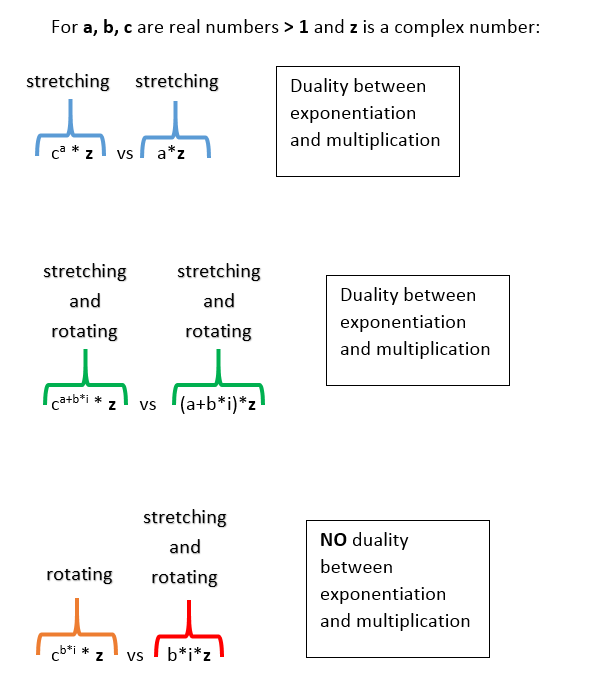 Edit 4: The question that was asked in this post Which general physical transformation to the number space does exponentiation represent? is sort of the theme that I am going for. The answer that was given to this post, however, omits a reference to the complex numbers.

Now, let's break down intuitively what different operations on the complex plane are (I know you said you already went over some of this in your question, but I think it will lead into the explanation for complex exponentiation nicely).

Complex addition is the same as vector addition: we add the components. Think of this intuitively by imagining each complex number as an arrow: adding two complex numbers is like sticking one of their arrows on the end of the other. Another way: think of adding a complex number not as a static operation, but as a transformation. Adding the number $(a+bi)$ is the same as shifting the origin of the complex plane onto the point $(-a-bi)$. Take a second to imagine why that's true. Thus $(a+bi)$ is a function with respect to addition, which maps every point in the complex plane to another point in the complex plane, (a+bi) away.

Complex multiplication corresponds to both a stretch and a rotation (usually). $$(a+bi)\cdot(c+di)=(ac-bd)+(ad+bc)$$

A better way to think about this is in terms of Euler's formula: represent your two complex numbers as polar coordinates, and multiplication becomes much clearer: $$r_1 e^{i\theta_1}\cdot r_2 e^{i\theta_2}=r_1r_2e^{i(\theta_1+\theta_2)}$$

What kind of function is "complex exponentiation"? We define it as follows: $a^{b+c\cdot i}$=$a^{b}\cdot a^{c\cdot i}$ where $a^{c \cdot i} = e^{c\cdot i \log a}$, etc. based on Euler's formula. $e^{c\cdot i \log a}$ is $e$ raised to a complex number and is thus a rotation. Note that we can imagine complex exponentiation again as a sort of dynamic transformation, squishing and mapping the complex plane to a new location.

Let's break this down into two cases. The first is the only one your question asks about.

1) The base of the exponent is real. As can be seen from above, every "complex exponentiation" is a transformation of the complex plane consisting of two transformations: first, a stretch by some factor, and then a rotation. This is very similar to complex multiplication, which begs the question, when do these two things behave in the same way? You called it "duality," I'm not going to call it that because that word means something specific in linear algebra, I'll just call this similarity "similarity."

Note that the two are very dissimilar - exponentiation is dependent on the base whereas multiplication is not. This is a result of the effect that multiplication by a complex number is something called a linear transformation (https://en.wikipedia.org/wiki/Linear_map), raising something to a complex power is most certainly not.

2) The base of the exponent is complex. This gets a little more complicated, because raising a complex number to a real power corresponds in part to a rotation, so separating which parts are the rotation and which parts are the stretching is a little annoying and won't give much insight here. Complex exponentiation of complex numbers is really funky, giving rise to all sorts of weird fractal shapes when we consider which complex numbers get really large when we raise them to a complex power, and which ones don't - this is related to how the Mandelbrot set is formed (https://en.wikipedia.org/wiki/Mandelbrot_set). The point is that, again, the magnitude of the stretch and rotation is dependent on x, meaning that this is not a linear transformation.

If you want to gain an intuition for how complex exponentiation of complex numbers works, I recommend you play around with some functions with this grapher: http://davidbau.com/conformal/#z

So, to return to what I mentioned at the beginning, the reason why you're not seeing a "duality" in case 3 is that there's no "duality" in case 2 to begin with - yes, both complex exponentiation and complex multiplication correspond to both a rotation and a stretch, but the rotation and stretch for each behave in very different ways. Complex multiplication is a linear transform, complex exponentiation is not.

I also enjoy brilliant.org's courses; if you're interested, I would recommend you check out their course on linear algebra next (https://brilliant.org/courses/linear-algebra/). This is the first answer I've actually posted. I would love feedback from anyone if they have it.

The failure of duality is that there was never really duality there in the first place.

But sometimes it is not stretched or shrunk: specifically, when $a = 0.$

But sometimes that vector is not stretched or shrunk either: specifically, when $a^2 + b^2 = 1.$

The key observation to me is that when you write something like $c^{a+bi},$ you identify a point in the complex plane using the parameters $a$ and $b$ somewhat like polar coordinates. Parameter $a$ dictates the radius $r$, parameter $b$ dictates the angle $\theta.$

When you write $a + bi,$ however, the parameters $a$ and $b$ act like Cartesian coordinates $x$ and $y$ of a point in the complex plane.

Polar coordinates don't work like Cartesian coordinates, and vice versa. They both identify points in a plane, that's mostly what they have in common. So when you wrote that both $c^{a+bi} z$ and $(a+bi) z$ stretch a vector as well as rotating it, that was (mostly!) true, but the way that $a$ and $b$ contributed to making it be a rotation or a stretching was completely different in each case.

What really makes multiplication not stretch or shrink a vector, is you have to make sure the thing you multiply $z$ by is a complex number on the "unit circle." You can get this either by choosing $r=1$ in polar coordinates (which corresponds to $a=0$ in the formula $c^{a+bi}$) or by choosing $x^2 + y^2 = 1.$

From here all your results get derived:

Of course, you can write it also as $(e^2)^iz$, but this way you will have to say that you apply the stretching ($z\mapsto e^2z$) imaginary ($i$) number of times. There is no intuitive physical meaning of applying some transformation $i$ times but, since you want to maintain the usual laws for powers as much as you can, you are forced to say that stretching done $i$ times becomes a rotation. Strange, but since there is no contradiction with common sense (common sense just says nothing about applying a transformation imaginary number of times), possible.

Not the answer you're looking for? Browse other questions tagged complex-numbers vector-spaces exponentiation or ask your own question.

5
Which general physical transformation to the number space does exponentiation represent?