The divergence in spherical coordinates is derived as

However, this seems to fail at a simple example. Let's take the identity $\vec F(\vec r):=\vec r$ for example. The divergence of the vector field $\vec F(\vec r)=\begin{pmatrix}x\\y\\z\end{pmatrix}$ in cartesian coordinates is

But in spherical coordinates the vector field would be fined as $\vec F(\vec r)=\begin{pmatrix}r\\\theta\\\varphi\end{pmatrix}$, so the divergence would be: 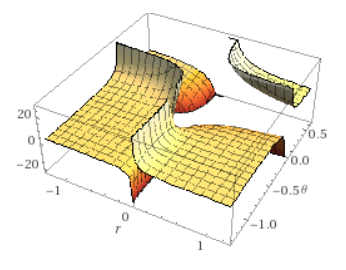 So what am I doing wrong here?

I am updating this answer to try to address the edited version of the question.

Another thing that's going on with these formulas is we have to make sense of things like $\frac\partial{\partial\theta}.$ If you have something that can vary as $r,$ $\theta,$ and $\varphi$ vary, then $\frac\partial{\partial\theta}$ is looking for what happens when we hold $r$ and $\phi$ constant but vary $\theta.$ What happens to the location defined by the coordinates $(r, \theta, \varphi)$ if we hold $r$ and $\varphi$ constant but increase $\theta$ is that we move in a "downward" direction perpendicular to the position vector. Given a starting point $(r, \theta, \varphi)$ for this motion, we define $\hat{\boldsymbol \theta}$ as the unit vector in that direction.

You can visualize a physical model for these vectors by supposing that the Earth is spherical and is centered at the origin of the coordinate system. Then at any point on the surface of the Earth, $r$ is the Earth's radius, $\theta$ is the co-latitude (like latitude, but it goes from zero at the north pole to $180$ degrees at the south pole), and $\varphi$ is the longitude. Then $\hat{\boldsymbol \theta}$ is in the direction of increasing co-latitude, so it points due south; $\hat{\boldsymbol \varphi}$ is in the direction of increasing longitude, so it points due east; and $\hat{\mathbf r}$ is in the direction of increasing radius, so it points directly away from the center. In particular, $\hat{\mathbf r}$ is a unit vector in the exact same direction as the position vector $\vec r,$ and the other two unit vectors are orthogonal to $\hat{\mathbf r}$ and to each other.

The answer is (usually) neither, you don't typically use those vectors for that kind of calculation at all. What those vectors are good for is as an orthonormal basis for things that occur locally at a point: a vector field at that point, the gradient of that field, the divergence of that field, and so forth.

Plugging in the correct values for all three components, the divergence formula gives the result $3.$

Now if you had a field that was not simply a radial field always going directly outward from the center or directly inward toward the center, that is, if there were some field vectors making other angles with the radial vectors, then you would see some non-zero values of $A_\theta$ and $A_\phi,$ and there would be a reason you needed the rest of the formula for divergence. You just happen to have chosen an example in which you have eliminated those components.

If you want a more interesting example, you might try a vector field such as $\vec A = x \hat{\mathbf x},$ which has non-zero derivatives in all three directions at most points.

It is sadly common when dealing with different coordinate systems, such as in this case, not to distinguish the function under consideration from its pullback under a coordinate transformation.

You didn't transform your coordinates properly:

Not the answer you're looking for? Browse other questions tagged vector-fields spherical-coordinates divergence-operator or ask your own question.