When eccentricity of ellipse $\epsilon<1 $ sketch is often made in a standard disposition during proof by Dandelin with spheres inside a single nappe of cone and cutting plane touching spheres in their central section at foci of ellipses so created.

But how do we construct this ambiance and calculate a hyperbola conic intersection $\epsilon >1 $ in association with the Dandelin spheres? Is my following sketch correct?

The error has since been corrected, duality noted. But for time being cone is not changed but variable sectioning is done. 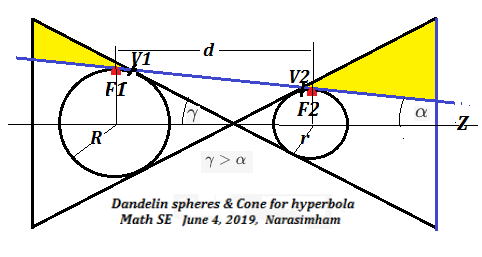 It is seen that there is a simple swap of cone & cutting angles from ellipse to hyperbola intersections and vice versa. In fact interchanging their colors of what they represent (Cone&Cutting Plane) the same sketch would serve either case in a duality situation.

For calculation if we take data for ellipse

The basic question here is whether there are two cones or one cone for a combined representation of Dandelon spheres $(R,r)$ in elliptic/hyperbolic intersections.

In the sketch here I have fixed the cone ( its angle, position) anf with differently inclined cutting planes. The second ellipse intersection at left is for time being ignored. I wish to bring out the two cases where product of eccentricities is unity.

Unless both are seen together in a common configuration a comprehensive picture somehow suffers imho, so this question. 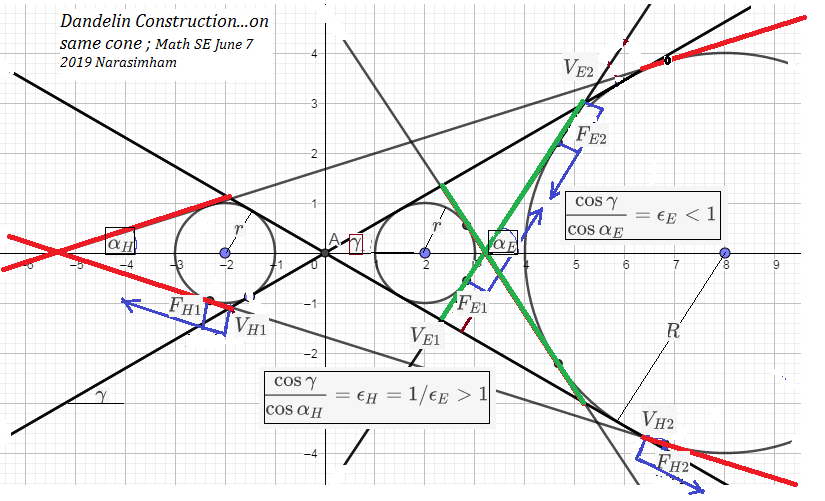 It takes two equal diameter Dandelin spheres contained separately in each nappe of a cone (say semi-vertical angle $45^{\circ}$) touching each nappe separately in order necessarily to result in an equiangular hyperbola intersection by a plane parallel to cone axis.

Converting comments (about the original version of the question) to answer, as requested.

The cutting plane should be tangent to the Dandelin spheres. For the hyperbola case, looking from the side (as in your image), the "cutting line" should be externally tangent to the two "Dandelin circles".

Here's "unified" picture of a Dandelin configuration for both ellipses and hyperbolas (and parabolas as a limiting case). It consists simply of two circles, $\bigcirc K$ and $\bigcirc K'$, and their common tangents: the internal tangents meet at $A$, making an angle $\alpha$ with the line of centers; and the external tangents meet at $B$, making an angle $\beta$ with the line of centers. Necessarily, $\alpha > \beta$. (Exploration of the case where $\alpha=\beta$, which defines a parabola, is left to the reader.) 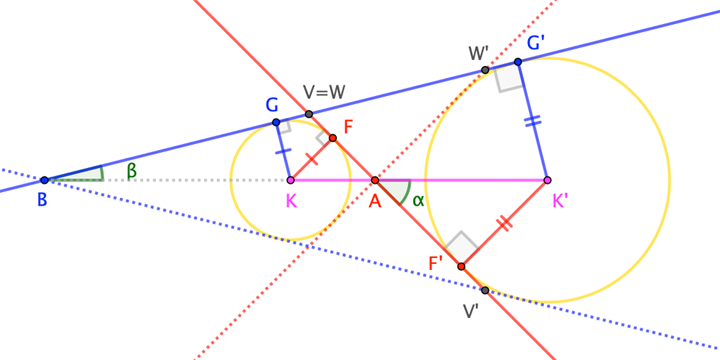 This allows us to restate the calculations made by OP:

It's worth reiterating that $(1)$ and $(2)$ say exactly that eccentricity of a conic is simply a ratio of internal and external tangent segments for these "Dandelin circles". I don't believe this is a new or particularly-profound observation, but I personally have never thought of things in quite this way. Nifty!