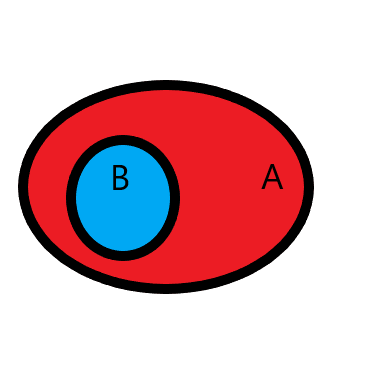 I would like to mathematically express the non-intersection of these sets. It is not the same $C= A \setminus B$ or $B \setminus A$ than $A$ (non $\cap$) $B$.

It is better not to use the expression “ negation” when one talks about a set; a set cannot be negated, only a sentence can be negated; but one can say that the set called “complement of the set A ∩ B” is defined by the negation of the sentence defining A ∩ B. That is, if the symbol for the complement of A ∩ B is : (A ∩ B)’ then one can say that :

The complement of a set S , denotetd by the symbol : S' , is the set of all x ( belonging by definition to the universal set U) that do not belong to B, that is the set : U – S.

Now regarding your question :

If the set A also is your universal set U , that is, if U=A

then , in that special case :

and therefore ( still in the special case we are considering) :