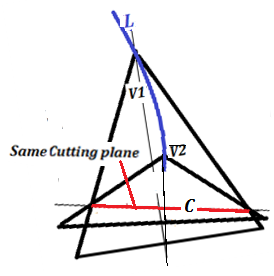 We have $ \epsilon$= eccentricity , $\gamma=$ semi-vertical angle of cone, $\alpha =$ angle to symmetry axis and since

Special case : If $C$ is a circle then $L$ is the common axis of symmetry of each cone.

Thanks in advance for pointers to vertex locus finding.

If the given conic is either an ellipse or a hyperbola, vertex $V$ of the cone must lie on the plane perpendicular to the plane of the conic and passing through its foci.

Let $A$ and $B$ be the endpoints of the transverse axis of the conic, $V$ the cone vertex, and $2u$ the aperture angle of the cone. Let then $P$ be any point on the ellipse and $H$ its projection onto $AB$. A plane through $P$, perpendicular to the axis of the cone, intersects the cone along a circle $A'B'P$ (see diagram below), where $A'$ and $B'$ lie on plane $VAB$. 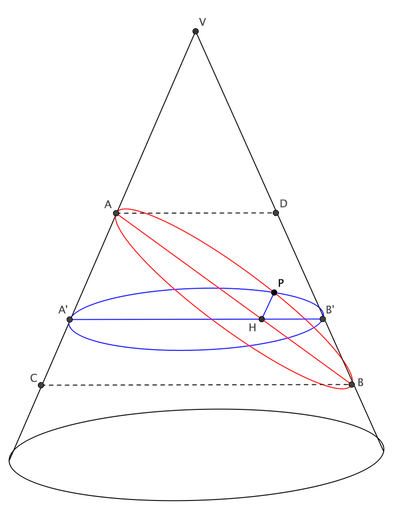 If the conic is a hyperbola you get instead $$(m+n)^2=4(a^2+b^2)$$ and the locus of $V$ is an ellipse having its foci at the vertices of the hyperbola and semi-major axis $\sqrt{a^2+b^2}$. This ellipse thus passes through the foci of the hyperbola.

Finally, if the conic is a parabola of vertex $A$ and semi-latus rectum $p$ one gets from a similar reasoning: $$ AV=n={p\over2\sin^2u}. $$ From that it follows that the distance of vertex $V$ from the plane of the parabola is $$VK=n\sin2u=p\cot u,$$ while the distance from the projection of $V$ on that plane to the focus of the parabola is $$KF=n\cos2u+p/2={p\over2}\cot^2u.$$ Hence $KF=VK^2/(2p)$ and the vertex thus lies on a a parabola, equal to the given parabola and having its vertex at the focus of the latter.

We can summarise the above results as follows: 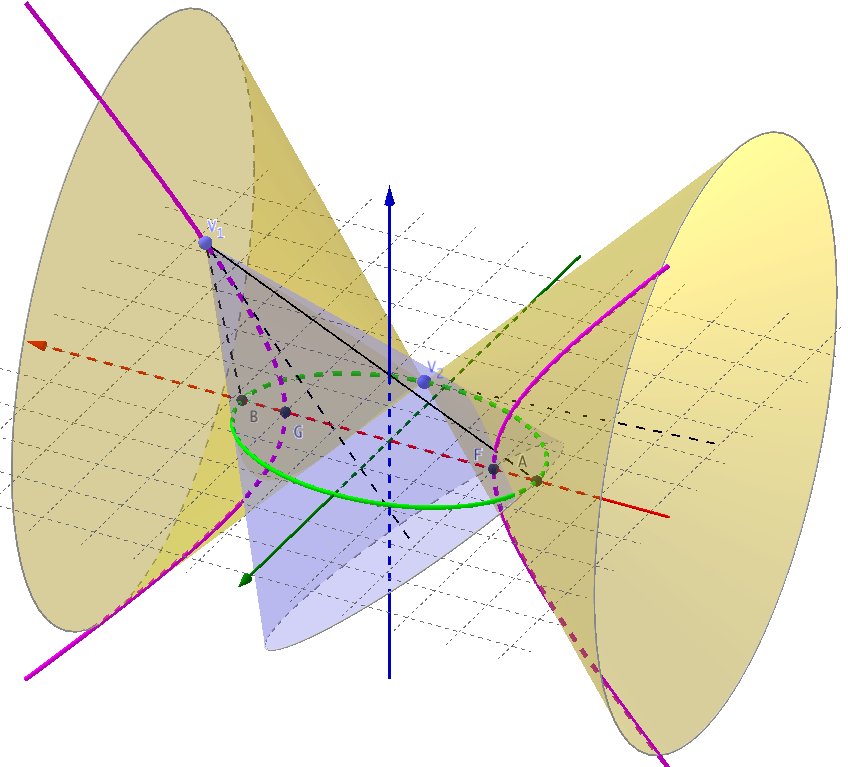 Not the answer you're looking for? Browse other questions tagged geometry conic-sections solid-geometry locus or ask your own question.

8
When is the intersection of a cone and a cylinder is planar?
3
Origin-Centred Elliptical "Spotlight" with Conical Light Source of Fixed Aperture
2
An ellipse has foci at $(1, -1)$ and $(2, -1)$ and tangent $x+y-5=0$. Find the point where the tangent touches the ellipse.

1
Evaluate the eccentricity of the elliptical section of a right circular cone
1
Relationship between vertex angle cone and angle circle sector
0
Prove that the semi-vertical angle of the right circular cone $4(x^2+y^2)-9z^2=0$ is $\tan^{-1}{3/2}$.
0
Geometric interpretation of tilted parabola locus
1
If a right circular cone has three mutually perpendicular generators then find its semi-vertical angle.
3
Locating focus and semi latus-rectum of conic by R&C construction.
1
Dandelin sphere construction with hyperbola and ellipse intersection on same cone
3
Locating the focus, vertex, and directrix of a conic when viewed as a plane section of a cone
0
Dihedral in a regular spherical polygon