Solving Laplace equation with conformal mapping for a region of radius $R$ and angle $\alpha$?

It is actually an electrostatic problem, I have to find the potential in the region descripted above using the laplace differential equation with the next boundary conditions: $V$ is $0$ in the straight sides and $V_0$ in the curve side. 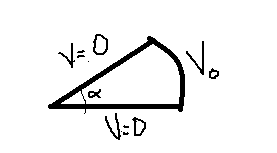 The problem asks for me to solve the laplace equation in a semi-infinite strip first, where the finite side has a potential V and both infinite sides have a 0 potential, which is an standard variable separation problem and can be easily solved.

The first thing that confuses me is that it doesn't seem like a conformal mapping because any function that transform the first region into the second can't preserve angles. My question is if I do an approximation an convert my region into a triangle Does exist a function that can transform my triangle in an semi infinite strip?

The probably source of your confusion is that conformal map doesn't need to preserve angle at boundary. For example, the map $z\mapsto z^{\pi/\alpha}$ is a conformal map that maps your sector to a half-disc, but it stretches angles at the vertex.