Locating focus and semi latus-rectum of conic by R&C construction.

A cone semi-vertex angle $\gamma$ is cut by a plane inclined at angle $\alpha$ to symmetry axis. Length of perpendicular on plane from the cone vertex is $q$. 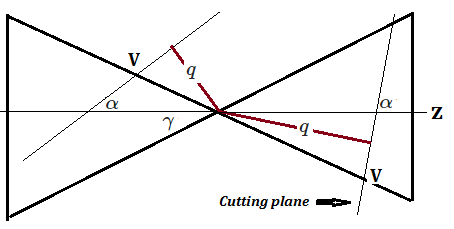 It is known that eccentricity

can be calculated. But can the semi latus-rectum $p$ or its length $\dfrac {q}{p}=f(\alpha,\gamma)$ be represented/found by geometric construction?

Thanks in advance for suggestion of a simple Ruler/Compass construction.

Finding foci for hyperbola intersection drawing direct tangents of Dandelin spheres.. is this how it is done? 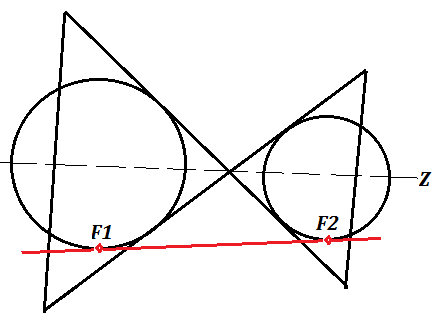 If $V$ and $W$ are the vertices of the conic section, and $VV'$, $WW'$ are perpendicular to the axis of the cone, then the latus rectum is given by (see here for details): $$ 2p={VV'\cdot WW'\over VW}. $$ This is valid for an ellipse or hyperbola: the equation for a parabola can be recovered by letting $OW\to\infty$, where $O$ is the cone vertex. 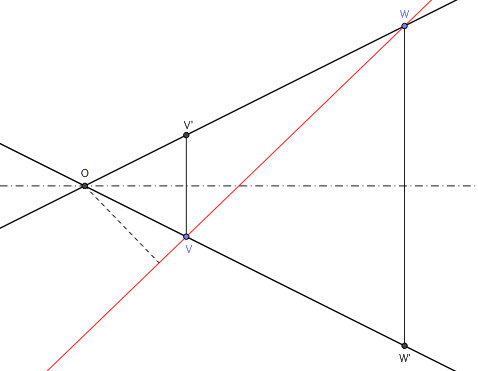 See below for a ruler-and-compass construction of foci $F$ and $G$, based on the formula for the distance between a focus and the center of the ellipse $c={1\over2}\sqrt{VW^2−VV'\cdot WW'}$. 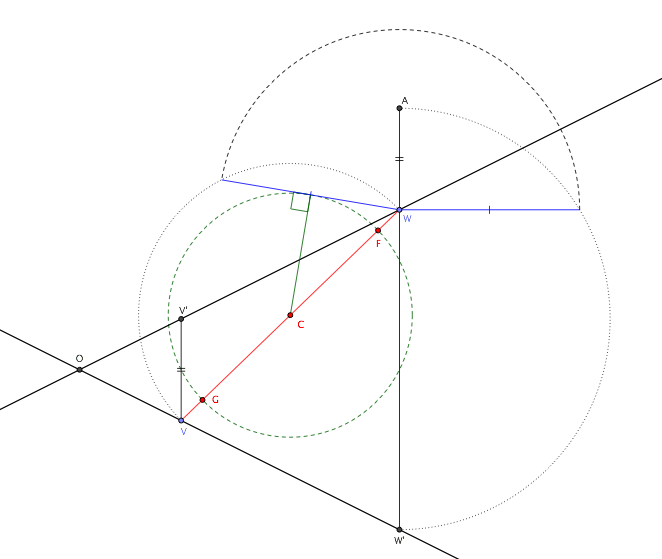 Here is a geometric construction of the foci and latus rectum of an ellipse based on the Dandelin spheres:

The other focus is similarly constructed by bisecting the angle $\angle B$ as shown in the figure (the other bisector would give us $P$ again), finding the intersection $Q$ of the bisector and the axis of symmetry, and dropping a perpendicular from $Q$ to $F'$ on $AB$; then $F'$ is the other focus and $QF'$ is a radius of its Dandelin sphere.

Not the answer you're looking for? Browse other questions tagged conic-sections geometric-construction solid-geometry or ask your own question.

1
Getting the minimum radius of curvature of a conic section

2
Conic property pedal length and polar/tangent rotations
2
Evaluate the eccentricity of the elliptical section of a right circular cone
3
Questions on the relation of the axis of a cone to its conic sections
0
Finding equation of parabola when focus and equations of two perpendicular tangents from any two points on the parabola are given
3
Construction of arbitrary regular polygons with ruler and compass
3
Conic sections & eccentricity: known vertical hyperbola, find radius of corresponding circle?
3
Finding the vertex, axis, focus, directrix, and latus rectum of the parabola $\sqrt{x/a}+\sqrt{y/b}=1$
1
Locus of right circular cone vertices resulting from constant conic intersection
1
Dandelin sphere construction with hyperbola and ellipse intersection on same cone
0
Proof that Dandelin sphere is focus of the parabola