Why is convexity a requirement for Brouwer fixed points? Shouldn't “no holes” be good enough?

Every continuous function $f$ from a convex compact subset $K$ of a Euclidean space to $K$ itself has a fixed point.

I am wondering why the word "convex" is in there. It seems to me that it is necessary and sufficient for $K$ to have no holes, which is a weaker condition than convexity.

Necessary: if $K$ has a hole, then the continuous mapping that simply rotates points around this hole has no fixed point.

What's wrong with this argument?

The spirit of your question is correct -- the hypothesis of convexity is unnecessary, and indeed any compact subset of Euclidean space without "holes" has the fixed point property. In particular:

Theorem. Let $K$ be any compact, locally contractible subspace of $\mathbb{R}^n$ whose reduced homology groups are all trivial. Then every continuous map $f\colon K\to K$ has a fixed point.

Here "locally contractible" and "all reduced homology groups are trivial" are a precise formulation of what it means for a space to not have "holes". This theorem was proven by Lefschetz, and it follows from the famous Lefschetz fixed point theorem. Specifically, the Lefschetz fixed point theorem is usually stated only for simplicial complexes, but it is known that every compact, locally contractible subset of $\mathbb{R}^n$ is a retract of a simplicial complex, from which the above theorem follows.

By the way, the reasoning you gave is not correct, because a compact, hole-less set $K$ need not be homeomorphic to a disk. For a simple example, the union of finitely many line segments in $\mathbb{R}^2$ meeting at a point is compact and "hole-less" (in the sense of the theorem above), but is not homeomorphic to a disk in any dimension. The above theorem says that any map from such a space to itself must have a fixed point.

If you are familiar with algebraic topology, you might wonder why the local contractibility condition is required. Hatcher's Algebraic Topology gives a counterexample to the above theorem in the case where $K$ isn't locally contractible. In particular, let $\varphi\colon \mathbb{R}\to (a,b)$ be a homeomorphism, let $S$ be the spiral $r = \varphi(\theta)$ in $\mathbb{R}^2$, and let $K$ be the union of $S$ with the circles $r=a$ and $r=b$. 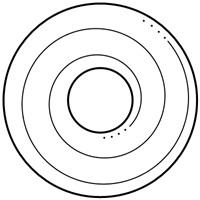 Then $K$ is compact and has no nontrivial reduced homology groups, but there is a map $f\colon K\to K$ without fixed points. Specifically, $f$ can be the map that "rotates" counterclockwise by any angle $0<\theta<2\pi$, where points on the spiral move by an angle of $\theta$ along the spiral. Note that this example is not locally connected, and is therefore not locally contractible.

It is just that a convex compact set is homeomorphic to the unit ball. And the fixed point theorem works for those spaces.

You better also demand connectedness in your definition of "holeless" because otherwise you can take two circles (compact) and have a continuous function which just switches them. Convex implies path connected, so that's why Brouwer doesn't apply.

Not the answer you're looking for? Browse other questions tagged fixed-point-theorems or ask your own question.