Observe that a triangulation $G$ ....(has property P)... if and only if its dual graph $G^*$ contains three Hamiltonian cycles such that each edge of $G^*$ is just contained in two of them. Since the problem of deciding whether a planar cubic 3-connected graph contains a Hamiltonian cycle is NP-complete[Garey,Johnson and Tarjan], we can deduce the problem of deciding whether a triangulation ....(has property P).... is NP-complete

From their words, it sounds like the answer to the question is yes. But I am clueless as to why. I could not find any counter example either.

This can be checked by brute force, since there are only six Hamiltonian cycles, and each of them looks like the following one up to an automorphism of the graph: 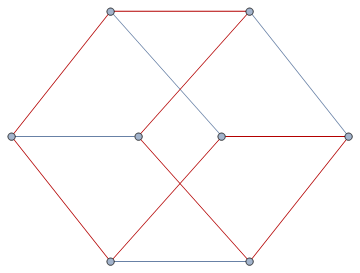 But once we draw a cycle, there is limited freedom to draw the two others, and we run into a contradiction quickly when we try to do it by hand. 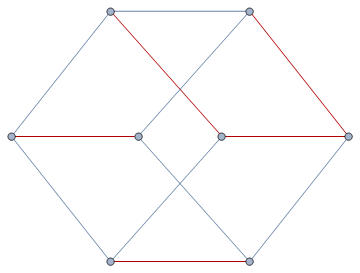 But these five edges cannot be completed to any Hamiltonian cycle, which is a contradiction.

Not the answer you're looking for? Browse other questions tagged graph-theory hamiltonicity or ask your own question.