Like all combinatoric problems, this one is probably equivalent to another, well-known one, but I haven't managed to find such an equivalent problem (and OEIS didn't help), so I offer this one as being possibly new and possibly interesting.

I have $2N$ socks in a laundry basket, and I am hanging them on the hot pipes to dry. To make life easier later, I want to hang them in pairs. Since it is dark where the pipes are, I adopt the following algorithm:

The question is: How long does my arm have to be?

In each case I provide the frequency for each possible arm length, starting with a length of 1. I use frequencies rather than probabilities because they are easier to type, but you can get the probabilities by dividing by $M!!$.

But, as I said at the beginning, this may just be a re-encoding of a known combinatorial problem, carrying a lot of previously worked out results along with it. I thought, for instance, of the lengths of random walks in $N$ dimensions with only one step forward and one step back being allowed in each dimension – but that looked too complicated to give any straightforward direction to follow.

In case it is interesting or helpful, I obtained the results above by means of a two-dimensional generating function, in which the coefficient of $y^n$ identified the arm length needed and the coefficient of $x^n$ identified how many socks had been retrieved at the [first] time that this length was reached. Calling the resulting generating function $A_M(x,y)$, the recurrence I used was:

which is based on sound first principles and matches the results of manual calculation up to $M=5$. Having found a polynomial, I substitute $x=1$ and the numbers in the table above are then the coefficients of the powers of $y$.

But, mathematics being close to comedy, all this elaboration may be an unnecessarily complicated way to get to a result too trivial to be found even in OEIS. Is it?

I did some Monte Carlo with this interesting problem and came to some interesting conclusions. If you have $N$ pairs of socks the expected maximum arm length is slightly above $N/2$. 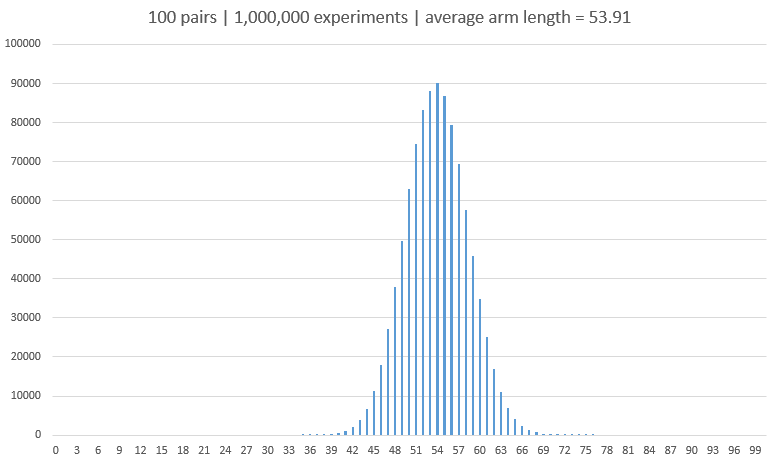 Nothing changed with 100 pairs of socks and 10,000,000 experiments. Average value remained the same. So it looks like you need about a million runs to draw up a meaningful conclusion. 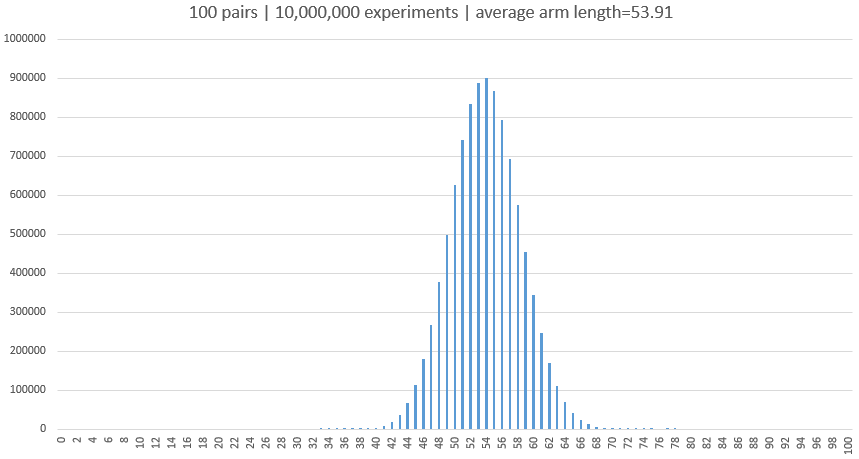 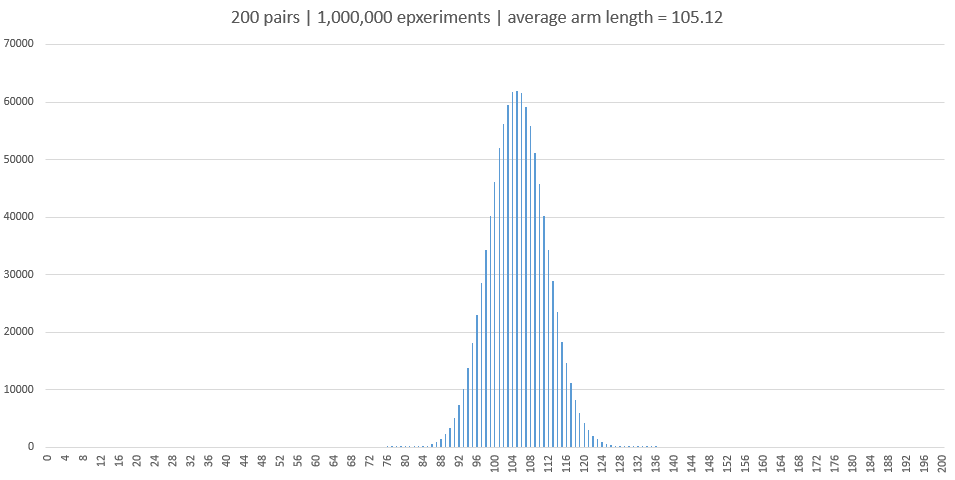 Finally, I decided to check expected maximum arm length for different number of sock pairs, from 10 to 250. Each number of pairs was tested 2,000,000 times before the average value was calculated. Here are the results: 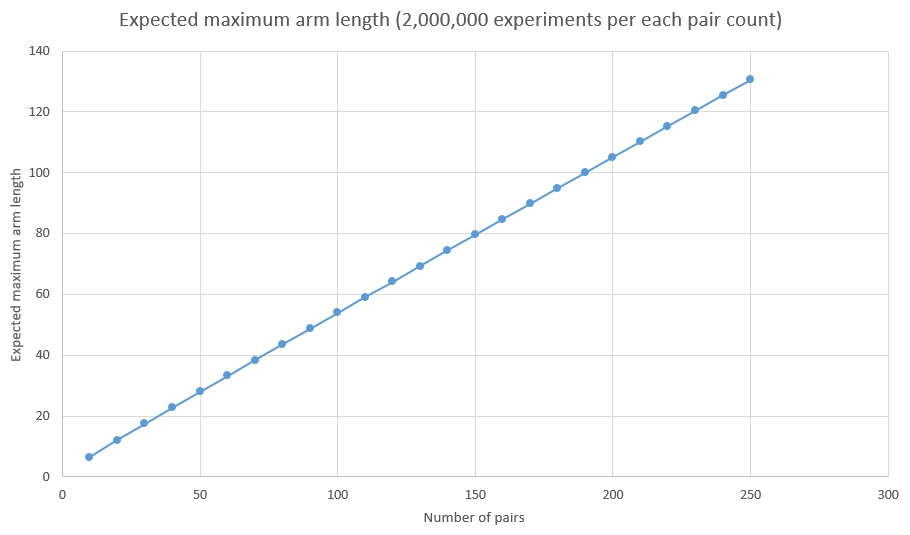 It looks like a straight line but it's actually an arc, slightly bended downwards (take a look at the increment column).

Finally, here is the Java code that I used for my experiments.

The expected value being below the mode of Oldboy's distributions says that the distribution is not symmetric around the mode.

3
How to calculate the expected value when betting on which pairings will be selected
0
Number of ways I can fit rectangles within a longer rectangle
3
Socks on a clothing line
1
Expected "overlap" between permutations of a multiset
0
Similar sequences of coin flips
2
Large gap Sparse Rulers
4
Why does the variance of the number of occurrences of a subsequence in a random sequence depend on the subsequence?
0
Number of permutations in $[2n]$ such that every cycle has exactly one even number
1
A couple in a dark room pulls 2 socks each from a shared drawer. What's the probablity of them getting exactly one & two pairs without trading?