The Circle Division by Lines problem (link) asks into how many regions, at most, one can divide a circle (or: the plane) with $n$ chords (or: lines).

I am wondering about a similar question, but for which the dividing curves are not chords/lines, but rather $\mathsf{V}$-shaped curves, which can be oriented in any direction. Stated succinctly:

What is the maximum number of pieces in which it is possible to divide a circle for a given number of $\mathsf{V}$-shaped cuts, where the cuts can be oriented in any direction?

RE: Initial Comments I am fine with the assumption that the vertex must be inside the circle and the angle should be fixed across all $\mathsf{V}$-cuts. But, I am open to suggestions as others see fit! 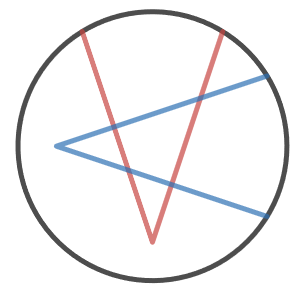 inner faces and the equality is attained iff each $V_{ij}$ equals $4$.

Not the answer you're looking for? Browse other questions tagged geometry graph-theory circles planar-graphs extremal-combinatorics or ask your own question.

1
Crescent Geometry (Dividing into Regions)
9
What is the maximum number of pieces that a pizza can be cut into by 7 knife cuts? (NBHM 2005)
4
Division of plane into equal area regions
3
Lazy Caterer's Problem: why a new line can cut all the others
2
Graph Theory - How many regions of an n-sided polygon with all chords added?
1
How to prove the maximum number of chords those can not across more than one other chord from points around the circle?
9
How many ways can we divide the Space with $N$ lines?