Given four points, determine a condition on a fifth point such that the conic containing all of them is an ellipse

The given points $p_1,p_2,p_3,p_4$ are located at the vertices of a convex quadrilateral on the real affine plane.

I am looking for an explicit condition on the point $p_5$ necessary and sufficient for the conic which is determined by $p_1,p_2,p_3,p_4,p_5$ to be an ellipse.

Could you give me a hint, please?

One can always construct two parabolas passing through $p_1$, $p_2$, $p_3$, $p_4$ (green and pink in the figure below), each one possibly degenerating into a couple of parallel lines if two opposite sides of quadrilateral $p_1p_2p_3p_4$ are parallel. Point $p_5$ will determine an ellipse if it lies inside either parabola but not in their intersection.

This follows from the fact that five points always determine a conic section, and because the parabola is a limiting case between ellipse and hyperbola: each time $p_5$ crosses the boundary of a parabola, conic section $p_1p_2p_3p_4p_5$ switches from ellipse to hyperbola (or viceversa). 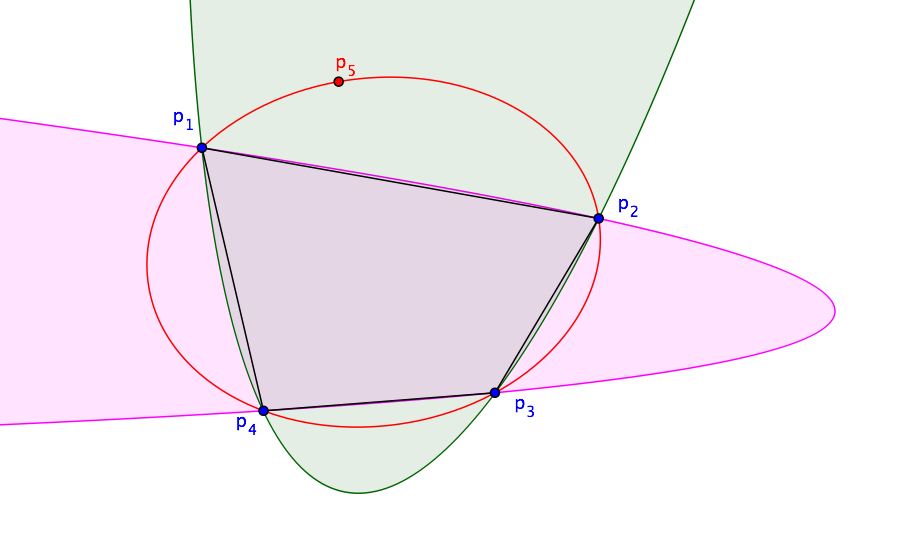 I'll expand-upon my hint, because the raw calculations get pretty ugly, yet there is a reasonably-tame way to express the desired condition.

Condition $(3)$, in $xy$-coordinates, turns out to be an expression in over $14,000$ terms. We can collapse the complexity a bit by using a self-induced coordinate system; specifically, we'll use barycentric coordinates based on $\triangle PQR$ (which we'll assume is non-degenerate).

(There's probably a nice projective interpretation of $(\star)$ that could've saved all the trouble of deriving it. :)

Adding to the direct answer in terms of parabolas: If you are reduced to ruler and compass or just do not want to actually draw the two bounding parabolas, you may want to transform the problem to a geometrically simpler one.

The method described below does this. It can be extended to find slopes of asymptotes (if any) and of principal axes when given five points of a conic section.

Relabel $p_1,\ldots,p_4$ to $A,B,C,D$. Any permutation is admissible. (Some details will depend on the permutation, but the overall result won't.) Let me also rename $p_5$ to $E$. We will use $ABC$ as reference triangle below.

Finding the isogonal conjugate of a point can be done using only ruler and compass. Furthermore:

(You could now place a point $F'$ arbitrarily on $g$ and construct its isogonal conjugate $F$ to obtain another point on the conic.)

Extension: if $g$ is not the line at infinity, the slopes of the corresponding circumconic's principal axes can be obtained by determining the points $H_1',H_2'$ on the circumcircle $U$ with tangents parallel to $g$ and transforming them back to points $H_1,H_2$ at infinity.

The solution to your problem is therefore to construct the isogonal conjugate $D'$ of $D$ and its tangents to the circumcircle $U$ of $ABC$. Then, when given another point $E$ of the conic, construct its isogonal conjugate $E'$ and test whether $\overline{D'E'}$ intersects $U$. The region for $E'$ where such intersection happens is bounded by the tangents to $U$ through $D'$ and is tinted green in the figure below. 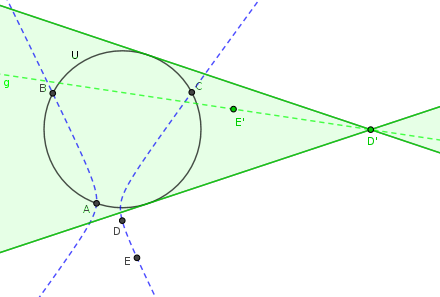 For those bounding tangents to exist, $D'$ must not be inside $U$. Isogonal conjugation translates this requirement to $A,B,C,D$ being vertices of a convex 4-gon, as given in the problem statement.

0
Affine coordinates of a line
5
Affine map $f : P_1 \to P_2$ between two planes
2
Affinity which maps one plane to another
5
What is the equation for an ellipse given 3 points and the tangent line at those points?
0
Cross Ratio of line through tetrahedron same as of planes of vertices with line
0
Matrix of an affine transformation
5
cyclical points on a conic section
0
Can we say that , for a parabola , no such point exists inside the parabola which is midpoint of more than one chord?