Nomenclature for composite knots with hierarchies

I'm not a mathematician but highly interested in knots form a biological perspective, so I hope everyone is fine with me using a less mathematical formalism to express myself in this post!

Recently, I've been curious about how what to call knots that have several different orders of "knottiness". For example, many celtic knots have C3 or C4 symmetry with knots attached at the outer rims along with a further entangled element at the center of the system. In the image below, two celtic knots are attached that illustrate my point. The image shows a knot to the left that is clearly simple to name and one to the right that is the source of my question. The left knot is obviously a [3_1]#[3_1]#[3_1]#[3_1] composite knot. However, the central core of the right knot (or link, more specifically) is mechanically interlocked and cannot be transformed into simpler knots. My question is then - how do you name a knot/link where there is a central interlocked element such as this one, and knotted elements along the edges. Or - in essence - what is the nomenclature for a knot/link with hierarchical orders of entanglements.

The link on the right can be described as having L4a1 as the core, and each component of the link is connect summed with two copies of $3_1$. One ought to be a bit careful with orientations, however, since both L4a1 and $3_1$ are chiral.

I probably got it wrong, but this might be the companionship graph for the second Celtic link: 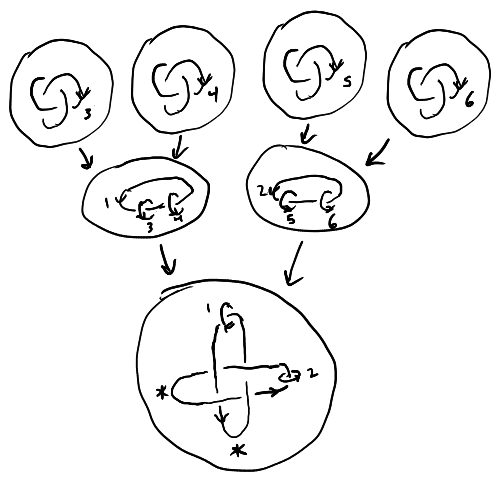 Not the answer you're looking for? Browse other questions tagged knot-theory or ask your own question.

1
Identifying Prime Knots
1
Why is there an ambiguity in Dowker's Notation for Composite Knots?
2
additivity of crossing number of composite knots
3
Knot invariants that discern prime and composite knots.
0
k-equivalence of knots
5
What's the best material for making knots?
0
Genus of Doubled Knots