Meaning of parallel transport on latitude of a sphere

There are many good answers - 1, 2 on how a vector changes its angle when 'parallel transported' along a latitude in a sphere. Most of the explanations use this logic - 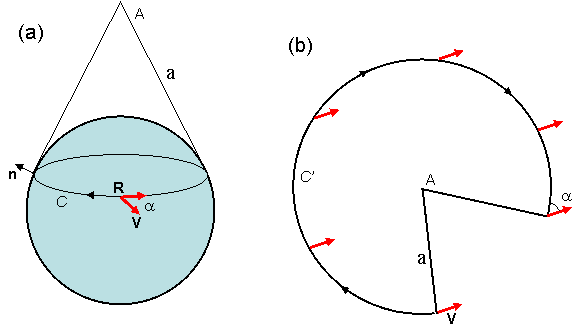 But I unable to understand how parallel transport looks like on the sphere.

I think that it is not the following picture because the angle remains same after rotation: 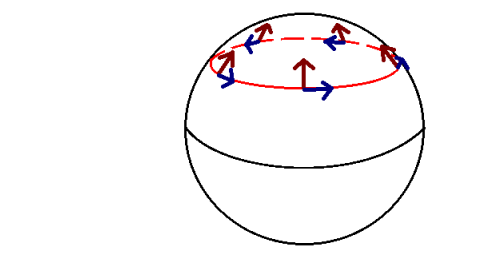 This page gives the following animation but I cannot understand why it is called 'parallel' transport?

In this illustration of 'parallel transport', it is very easy to see what is happening: If one moves from point A to N holding a javelin always pointing towards the north, and from point N to B javelin is still held parallel to its position at N, then angle of javelin is different from directly moving from A to B with the javelin pointing north. 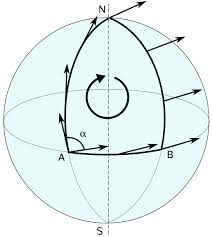 Referring to your first set of figures, take the unrolled cone in figure (b). Treating it as a shape cut from a piece of paper (being careful not to cut away the red arrows), glue the two straight edges together. Allow the resulting figure to form the shape of a cone.

Place the sphere in the open mouth of the cone so the sphere is like a scoop of ice cream in an ice cream cone. Choose the radius of the sphere so that it sits in the mouth of the cone as shown in figure (a), so that the curved edge of the shape from figure (b) touches the sphere along a small circle. Then the red arrows will be tangent the the sphere along that small circle, and they will show how a vector is parallel transported around that small circle. (The parallel transport ends at the point where you glued the shape together; if you try to follow the path through that point the vectors represented by the red arrows will appear to suddenly turn through an angle $\alpha$.)

In your last figure, the movement from $A$ to $N$ is along a great circle, and so is the movement from $N$ to $B.$ A great circle is a straight path in the two-dimensional space of the surface of the sphere, that is, it is the path you will follow if you do not turn to either the left or right. Since you do not turn while you follow a great circle, if you keep holding the javelin in the same direction relative to your direction of travel, the javelin will not turn either. This is the same effect you get on a flat plane when you travel in a straight line across a field of parallel vectors.

An important difference between a flat plane and the surface of a sphere, however, is that there is no uniform parallel field of vectors on the surface of the sphere. You demonstrate this by going from $A$ to $N$ to $B$ and back to $A$; while the javelin did not turn while you traveled along any part of that path, it is not pointing the same way when you return to $A$ as when you left $A.$ That sort of thing could never happen in a flat plane.

When you travel along a small circle as shown in figure (a), you are turning, not going straight. (If you were going straight you would follow a great circle instead.) If the javelin does not turn, then its angle relative to your path will change at the same rate as the direction of your path changes, that is, as fast as you turn. Again, that is the same local phenomenon you see if you follow a curved path in a flat plane.

If you were traveling along a very small small circle, that is, if the radius of the circle were negligible in comparison to the radius of the sphere, the parallel transport of a vector would look almost the same as it does in a flat plane and would be very easy to visualize. If the javelin was pointing straight ahead when you started, when you are halfway around the circle it would be pointing opposite your direction of travel.

Not the answer you're looking for? Browse other questions tagged differential-geometry riemannian-geometry or ask your own question.