Eigenvalues of a Covariance Matrix with Noise

I proceed in calculating the eigenvalues from

and finally the eigenvalues are:

Now I'm kinda stuck. I'll leave below what I did:

How can I go further? Is it better to either find the values of z or to use another approach like SVD if applicable?

My main goal is to find those eigenvalues.

Following the answer below from @GNUSupporter 8964民主女神 地下教會, I see that since the discriminant is less or equal to zero, I have that

If not, is it possible to just say that

My main goal is to find those eigenvalues.

Note that by the a.m.-g.m.-inequality,

Despite OP's edit to include some trigonometric function, in this section, I shall make no use of them since this is essentially an algebra problem for finding roots of cubic-equations, and that trigonometric functions are transcendental. I'll keep my existing working algebraic at the first place. By algebra, I don't mean to be arithmetic, that is, I avoid as much calculations as possible.

I say "at most" since I haven't (and won't directly) checked some of them repeat themselves.

To visualize $u$, you may consider it as a nonzero arrow on the complex plane, and $\omega$ as a rotation of 120°. 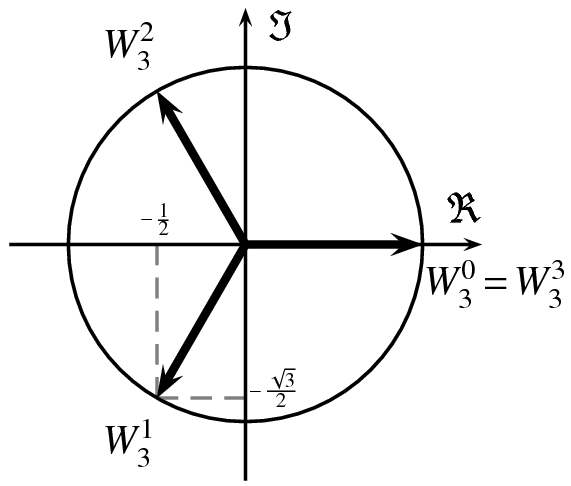 Remark: I used "third root of unity" in the first version of this answer since it's easier to type in words than its explicit expression.

To litterally respond to your question, it depends on your personal choice. Nobody can answer that for you.

This ambiguity would give rise to at most $3 \times 3 = 9$ possible candidates of $z$, but a cubic equation admits exactly three roots in $\Bbb{C}$. Therefore, an additional condition has to be added.

Not the answer you're looking for? Browse other questions tagged eigenvalues-eigenvectors covariance correlation svd symmetric-matrices or ask your own question.