3) calculate intersection of this line with the ellipse

Problem: I have no clue how to do that either. Appreciate any help. 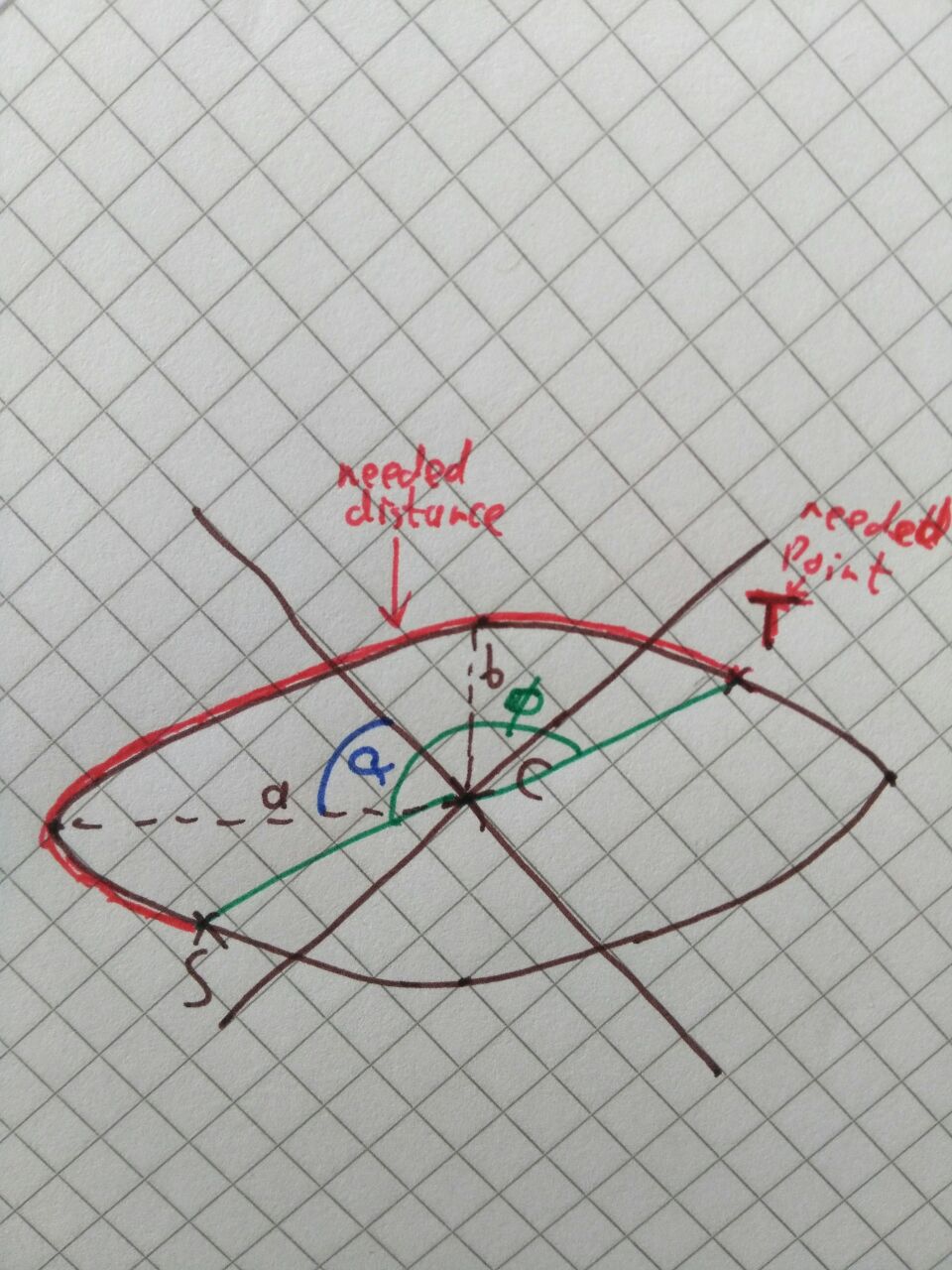 Your proposed method for finding $T$ is pretty good, although it can be simplified a bit. The tricky part is finding the distance, which I'll call $d$, along the arc of the ellipse. The best you'll do for this is a numerical approximation, because the exact distance involves an integral that cannot be expressed in elementary terms (indeed, the phrase "elliptic integrals" is a standard term precisely because of this).

First, let's write down two equations for your ellipse. I'm going to assume that the center, $C$ is at $(0,0)$, because that makes everything a little easier. To make this work, you replace $S$ by $S' = S - C$, you compute $T' = T - C$, and then you add $C$ back to $T'$ to get the point $T$ that you really wanted. This follows the general rule in physics (and linear algebra) that you're best off choosing the right coordinate frame to work in.

So that gets you the position of $T$.

As for the arclength, I can only suggest a numerical computation. It'll be easiest to work in the primed coordinate system. You basically need to compute a whole lot of angles between $\beta$ and $\gamma$, and compute a corresponding ellipse-point for each one, and then sum up the distances between successive ellipse-points (i.e., you're approximating the ellipse with an inscribed polygon with many many vertices). By taking the number of points to be large, your error can be made small, but that's about the best I can do for you.

Not the answer you're looking for? Browse other questions tagged linear-algebra geometry conic-sections or ask your own question.

0
Find the intersection of a line (segment) and an ellipse (from the center of ellipse)
6
Normal to Ellipse and Angle at Major Axis
2
find the center of an ellipse given tangent point and angle
1
Maximum Y in a rotate ellipse with a, b and phi
2
Finding the point on a rotated ellipse corresponding to a given tangential angle
4
Start and end point of a rotated ellipse
0
Angle between x-axis and major axis of ellipse
0
length of an arm from a point along major axis of ellipse
1
Distance from focus to nearest point in ellipse