How to find the Eulerian circuit with the minimum accumulative angular distance within a Eulerian graph?

For context, this problem is part of my attempt to determine the path of least inertia for a free and open-source laser scanner DAC API I am developing. The following problem arises during the vector image optimisation pass. I convert the 2D vector image into a graph of 2D positions and add blank edges (i.e. transparent lines) to represent the image as a strongly connected, undirected Eulerian graph from which I should be able to determine the optimal Eulerian circuit.

Given a strongly connected, undirected Eulerian graph (i.e. each vertex has an even degree), I'm trying to determine the Eulerian circuit that results in the minimum possible accumulative angle, where each vertex is a position in 2D space and each edge describes a straight line between the vertices.

My attempt at solving this was to first simplify the problem by looking at each vertex individually. We know that each vertex must have an even degree, and thus for each vertex there must be an optimal set of incoming/outgoing edge pairs (where each edge is used once) that results in a minimum accumulative angular distance. By minimum accumulative angular distance, I'm referring to the sum of the difference between the result of the difference between the angle of each incoming/outgoing edge pair and a straight line. For example, given the following vertex A and its neighbours B, C, D and E: 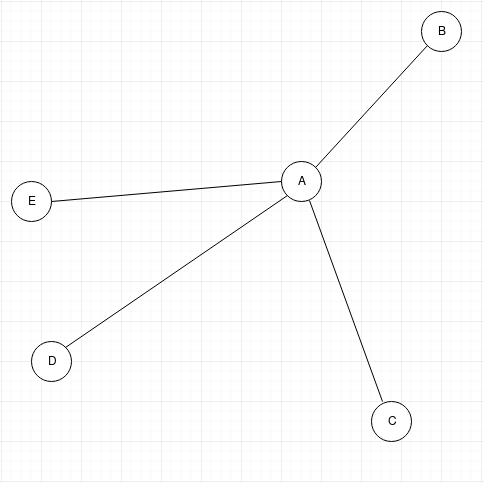 Once the set of optimal pairs is determined for each vertex, I suspect the Eulerian Circuit can be created by starting at one of the vertices, picking a direction to begin and following the optimal pairs until the beginning is reached again.

In section 3.4 of Accurate and Efficient Drawing Method for Laser Projection the paper describes using Hierholzer’s algorithm for finding an optimal Eulerian circuit with the amendment that during traversal of each vertex you select the unvisited edge along the angle closest to a straight line. One issue that occurs to me with this approach is that it is not clear to me that this always results in the absolute optimal circuit, only one that is probably more optimal than a naive construction without this added amendment.

Browse other questions tagged or ask your own question.