In a convex quadrilateral each vertex is connected by two line segments with the midpoints of the two opposite sides.

In a convex quadrilateral each vertex is connected by two line segments with the midpoints of the two opposite sides. In total eight line segments are drawn. Suppose that seven of them have the same length $a$. Prove that the length of the remaining segment is also $a$.

I'm considering to prove by contradiction. Assume the remaining segment is not equal to a, but I don't know how to get an impossible steps.

Let the unknown length be $\overline{AD}$.

The triangles $ACF$, $EGB$ are isosceles. Hence the segment $BF$ is perpendicular to both $AC$ and $EG$ and divides those two triangles in half. Therefore the edges of the quadrilateral $AC$ and $EG$ are parallel.

Since the lengths $\overline{GH} = \overline{HA}$, $H$ is also the midpoint of the straight line that goes through $H$ and is perpendicular to the straight line that passes through the edges $AC$ and $EG$. We have a similar result for point $D$ because the lengths $\overline{CD} = \overline{DE}$. Hence we have that the segment $DH$ is parallel to the edges $AC$ and $EG$.

The triangles $DEG$ and $EGH$ are congruent by the side-angle-side condition. Which means that the lengths $\overline{DE} = \overline{GH}$. Therefore, since $DE$ is perpendicular to $EG$, so is $GH$. Hence, $HA$ is parallel to $CE$ and has the same length.

Consequently, triangles $CDH$ and $ADH$ are congruent, leading to the conclusion that $\overline{AD} = \overline{CH} = a$.

After reading all of this I wonder if there were a simpler way of getting this result... 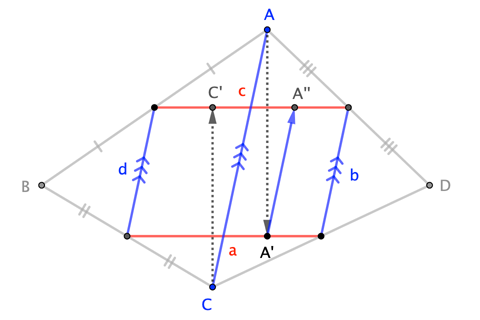