Number of equal triangles in a chessboard 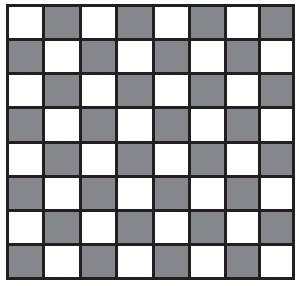 $1\times 1$ is cut and taken out from every corner of a $8\times 8$ chess board. At least, how many equal triangles (equal triangles means congruent triangles, and color is not important) can be drawn on the remaining figure?

What is the answer when we cut a $1\times 1$ from a single corner of chessboard?

For the first part of the question I cover chessboard by 20 equal triangles after removing corners like this: 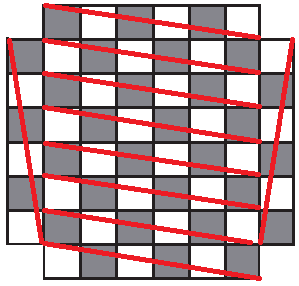 Is less than this possible?

Edit: This is now a full solution.

Furthermore, considering the side of $R$ on the red edge as the base of $R$, the height of $R$ is at most $7$. Therefore, the area of each triangle is at most $7/2$. This implies that when the board has a single corner removed, the number of triangles is at least $63/(7/2)=18$. This is indeed achievable; tile this checkerboard with a corner removed with $7\times 1$ rectangles, then cut each rectangle in half diagonally.

Credits to antkam in the comments for coming up with this part of the solution.

For the first problem, first suppose that the height of the triangle is at most $6$. Then an area argument proves that at least $20$ triangles are necessary. If we did have height more then $6$, then the triangle would resemble the second picture. Both of the longer sides of the triangle would have length more than $6$. Now, considering the triangles covering the top edge of the chessboard, they would all have to have their small edge on the top (because the other edges are too long), and would be leaning to the left. It is easy to see that this is impossible, and the triangles would have to jut out the left edge of the board. Therefore, $20$ triangles is optimal. 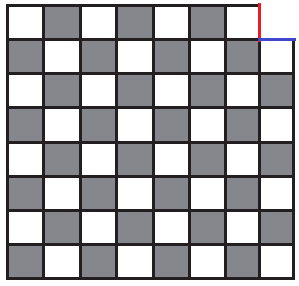 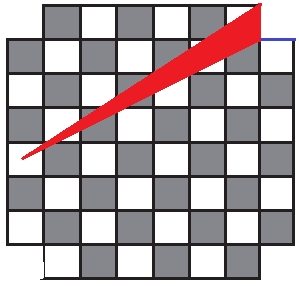 Not the answer you're looking for? Browse other questions tagged combinatorics geometry contest-math or ask your own question.

18
What is the Probability that a Knight stays on chessboard after N hops?
10
Kings on a chessboard
0
How many possible setups on the chessboard?
1
Counting problem: How many triangles?
5
1998 USAMO problem #4
3
Hint for problem on $4 \times 7$-chessboard problem related to pigeonhole principle
0
Maximum number of kings on the chessboard subject to some rules
7
How many maximum triangles can be made?
1
Please explain the proof of the Mutilated Chessboard Problem
3
Distance formula for generalized knight movement on infinite chessboard from a corner