In an equilateral triangle $ ABC $ the point $ D $ and $ E $ are on sides $ AC $ and $AB$ respectively, such that $ BD $ and $ CE $ intersect at $P$ , and the area of the quadrilateral $ ADPE $ is equal to area of $ \Delta BPC $ find $ \angle BPE $. This question when I first tried looked easy and I was also able to guess the answer but when I tried to proof, was not able to work it out. I want some help. Thank you. No image was provided in question. I am attaching my drawing. 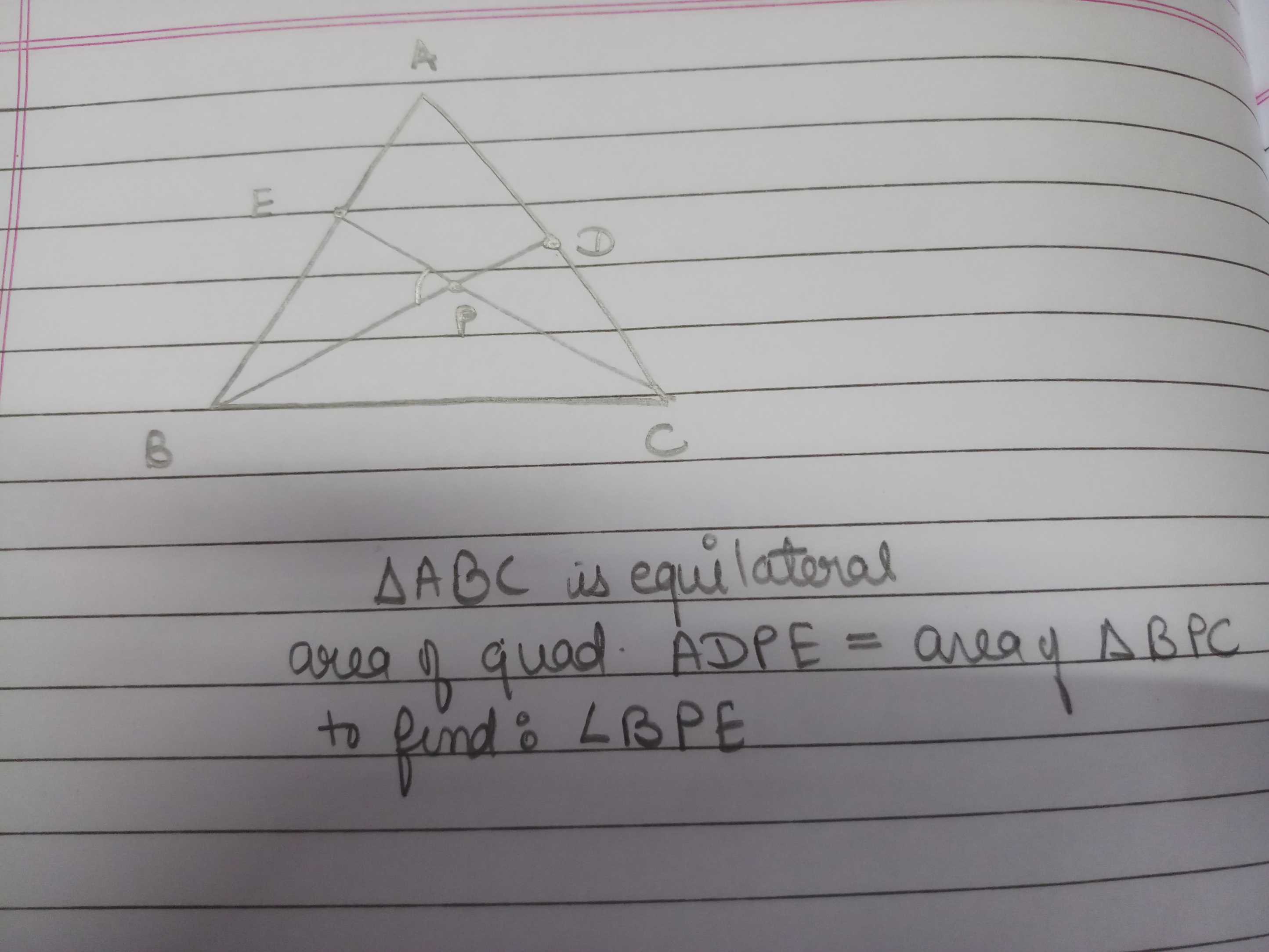 From the condition, we add area of ∆BPC to both sides of the equation, this becomes

It is then easy to prove that ∆AEC is congruent to ∆CDB. So ∠BDC = ∠CEA. 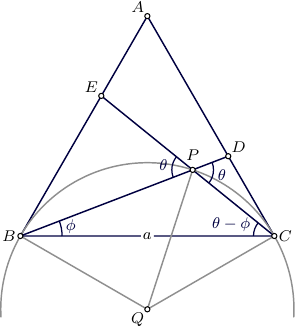 After expanding and refactoring we get

Let the areas of the each of the four parts, the quadrilateral, $\triangle EBP,\triangle BCP,$ and $\triangle PCD$ respectively be $W,X,Y,Z.$ Also, letting $|AE|=a,|EB|=b,|AD|=m,|DC|=n,$ we have that (considering the two triangles based on $AB$): $$\frac{W+Z}{X+Y}=\frac ab.$$ Similarly, by considering the triangles based on $AC,$ we must have $$\frac{W+X}{Z+Y}=\frac mn.$$ Since we want $W=Y,$ it follows that we must have $$\frac ab=\frac nm.$$ We must also have $$a+b=n+m=1,$$ that last equality holding wlog. We then have that $a=n$ and $b=m,$ from the first two equations. It then becomes clear that there are infinitely many positive $a,b,m,n$ satisfying the conditions given. If we let, in addition, $a=b$ (which is not actually given), then it is clear that in this case there is a properly defined solution. Indeed, $ED$ now becomes parallel to $BC,$ and $\triangle AED$ is similar to $\triangle ABC.$ Thus, we have (as is easily verified) that $\angle BPE=60°.$ However, I emphasise that (as OOP confirmed under the comments on OP) the assumed condition $a=b$ is not part of the original problem. Hence my claim above that the problem has no unique solution. However, we may get a parametric solution as follows.

Fix any $0<a<1,$ then the position of the cevian $CE$ is fixed. Also, as is clear from the above argument, $m,$ and therefore the other cevian $BD,$ is fixed too. Thus, the angle $BPE$ sought is also now determined. Therefore, let $\angle BPE=\angle DPC=\theta.$ Let us make the following abbreviations, letting $\angle PEB=\omega,\angle PBC=\phi,\angle PCB=\phi',\angle CDP=\omega'.$

PS. It should be noted that the procedure above will apply mutatis mutandis to an arbitrary triangle with given sides, since then the angles are also determined by the cosine rule, and therefore the data in this case is not less than that given in the equilateral case above.

In light of the elegant proof of @qsmy I was wondering where I had gone wrong. Turns out both his results and mine are consistent, provided I withdraw the non-sequitur that because there are infinitely many arrangements satisfying the given conditions, it follows that there are also infinitely many solutions. It does not actually follow. That was my error. As qsmy has shown, the angle $BPE$ is always equal to $60°$ for all those configurations. Isn't that cool!

IF there exists a set of points P for which the two areas are equal, then one such point P lies on the vertical altitude (axis of symmetry), thus we only need to find that point. Dividing each of the two areas in half with the vertical altitude, the problem can be stated as Area(BPS) = Area (APE), where S is the foot of the altitude (the midpoint of BC). The midpoint (centroid?) of the triangle (with altitudes) divides the area of the whole triangle into six similar triangles, including the two above. So the midpoint of the triangle satisfies the condition, thus the angle is 60 degrees.

Not the answer you're looking for? Browse other questions tagged geometry euclidean-geometry triangles area or ask your own question.