Can we compute the area of a quadrilateral with one right angle when we only know the lengths of any three sides?

I took an IQ test for fun recently, but I take issue with the answer to one of the questions. Here's the question: 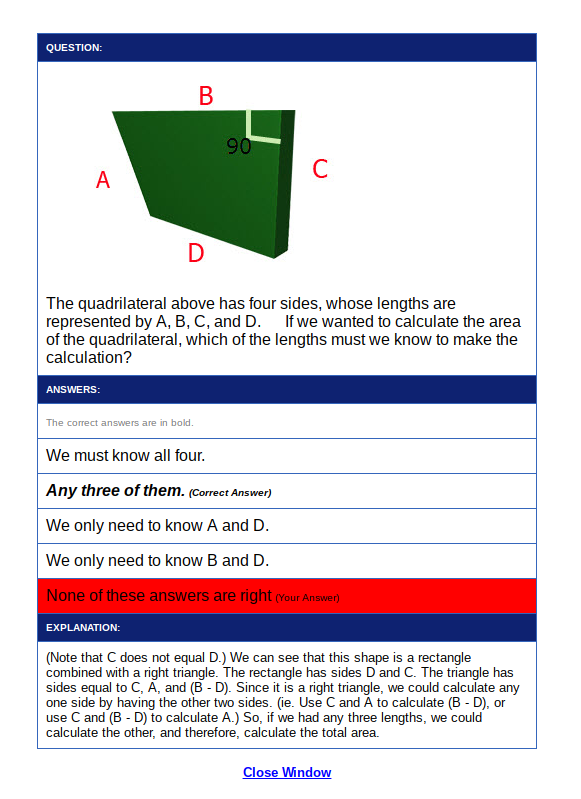 My issue is that the explanation assumes angle DC is a right angle. Given that assumption, I can see the quadrilateral is indeed a rectangle and a right triangle and can follow their explanation. However, (from what I remember my high school geometry teacher telling me) even though an angle looks like a right angle, it shouldn't be assumed unless it is explicitly stated or you can prove it. To explain what I mean, if DC isn't a right angle and we exacerbated that difference, it would look like the following:

Thus, even being given A, B, C and D it seems like the area could not be calculated.

So my question is twofold:

You are right. The provided explanation is nonsensical. $DC$ cannot be assumed to be a right angle.

However, if you don't make that assumption, and take $BC$ as the only given right angle, the correct answer is "All four sides must be known."

The quadrilateral can be decomposed into two non-overlapping triangles. The first is a right angled triangle formed by sides $B$, $C$ and a hypotenuse, and its area is easy to determine. You can use Pythagoras' Theorem to find the hypotenuse of that right triangle formed by sides $B$ and $C$. That hypotenuse, together with sides $A$ and $D$ forms the other triangle. Its area can be computed using Heron's formula. Just sum the areas.

Note that I'm still making a tacit assumption that this is a convex quadrilateral. A concave quadrilateral is possible with the angle $AD$ being reflex, which is seemingly not representative of the diagram given, but is a possibility when one only has the information of a single right angle and four given sides. In the case of a concave quadrilateral, the area calculation that I detailed above would not be correct.

You are correct that the given solution is wrong. Worse still, even if you know that the angles between BC and CD are both right-angles, the purported answer is still wrong! This is because if you're given the lengths of A,B,C, it still does not uniquely determine D because we are not told that the angle between AB is less than $90°$.

In general, it is not enough even if you have all four side lengths. For example, consider convex quadrilateral $PQRS$ such that $PQ = 6$ and $QR = 9$ and $RS = 7$ and $SP = 8$. It is possible that $P,R$ are slightly less than $15$ apart, making $PQRS$ a very skinny quadrilateral whose area can be made arbitrarily close to zero. Alternatively, moving $P,R$ to a distance of $10$ makes $PQRS$ rather square-like with area clearly more than $48$. Bretschneider's formula gives the area for an arbitrary quadrilateral, and you can see from it as well that fixing the side lengths is not enough to determine the area, since it also varies with the sum of two opposite angles.

You are right: there is absolutely no indication that angle $DC$ is a right angle. If they wanted you to assume it was a right angle, they should have indicated that with another $90$. It really doesn't even look like a right angle (somebody had the bright idea of trying to render the picture in perspective, but we don't even know where the horizon is supposed to be).

1
Solving right triangle given the area and one angle
7
What is the Maximum Area of a Quadrilateral with sides of length a,b,c,d (in sequence).
17
Can one deduce whether a given quantity is possible as the area of a triangle when supplied with the length of two of its sides?
1
Prove that the midpoints of the sides of a quadrilateral lie on a circle if and only if the quadrilateral is orthodiagonal.
3
Given three points, how can I tell if the angle is acute without using trigonometric functions?
7
Similar quadrilateral to a given one with vertices of the same color
2
IMO 2003 /G1: Show that $PQ=QR$ if and only if the bisectors of $\angle ABC$ and $\angle ADC$ are concurrent with $AC$.
0
Why are three vectors linearly dependent when one of them is a combination of the other two?